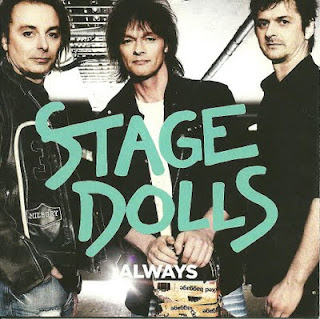 Perhaps because they hail from Norway, or more likely because they don't have an American distribution deal, very few people that I know have actually heard of the Stage Dolls despite the fact that they have released 7 studio albums, a live album, two compilations, and a solo album from lead singer Flakne.  That is unfortunate because the Stage Dolls are one of the few bands who, if you listen to them now, have not changed their sound significantly just to keep up with the times; the band that used to open for the likes of TNT in 1985 is still the same band that released Always in 2010.  The Stage Dolls know what brought them to the dance and they stick with it, even after more than 25 years of making music together (Flakne and Storli have been together since 1983...Skogstad joined in 1993).

The Stage Dolls' sound has been described by many, including myself, as Bryan Adams meets Goo Goo Dolls and Bon Jovi, although some of their earliest material bordered on glam at times.  I know that sounds like an odd combination, but it really is fitting.  Never do they rock much harder than the hardest material from Goo Goo Dolls, with a lot of their stuff sounding very similar to Adams in terms of style and delivery.  The Bon Jovi comparison comes in on the band's ballads, as they do an excellent job of pouring emotion into their songs regardless of if they are going for a power ballad sound or more of a stripped down, sparse arrangement.

The latest album from the Stage Dolls finds the band in fine form, doing what they do so well:  performing middle-of-the-road hard rock intermixed with a handful of ballads.  When they are rocking, such as on opener, "Always", "Better Off Pretty", "Saturday Night", or the bottom-heavy "Rollin'", the Stage Dolls are masters of the hook and catchy chorus mixture, with Flakne's smooth Adams-esque delivery perfectly suited to this material.  "Highway's Open" is another great track that finds the band steering itself into Def Leppard-ish territory and doing it better than Leppard has in years!  This is quite possibly my favorite track on the album, although, in all honesty, there are no bad tracks to be found on Always, especially through the first eight cuts.

The band takes a couple of quirky twists on the last two tracks of the disc.  "Where The Blacktop Ends" has a definite Mutt Lange-countrified sound to it, a la Lange's ex-wife, Shania Twain.  The song is an uptempo number, still firmly rocking along, but also incorporating a fiddle and a country-tuned guitar solo.  It's still a good song, but not something Stage Dolls fans are accustomed to hearing, and not something first time listeners should expect to hear on their older material.  I have a feeling the band was just looking for a fun song to incorporate some new ideas into, and it does work well.  Album closer, "My Strangest Friend", which is really a Flakne solo track, is just the singer and his guitar on an airy acoustic number that has something of a folksy feel to it.

The Stage Dolls offer up a couple of ballads here, of course, with "Rainin' On A Sunny Day" being the strongest, although "Eye Of My Heart" is a nice song, also.

If this is your first exposure to the band, understand that this is not their "heaviest" album by any stretch, but it is representative of where about 60% of their catalog lies.  That being said, there are some excellent tracks here that work very well and serve as a great introduction to new fans.  My guess is that most older fans, myself included, are very happy to hear the Stage Dolls doing what they do so well, with Flakne and Company still in fine form vocally and musically.

Return To Reviews Index
Posted by arttieTHE1manparty at 4:15 PM