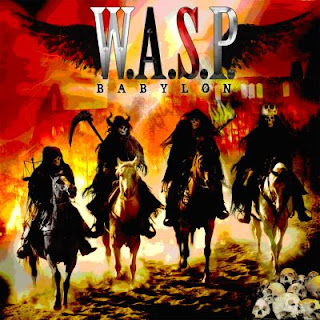 To say that Babylon is not a Christian metal record is to flatly deny what he has said and what the lyrics to (most of) the songs speak themselves.  No, there is not an error in what I am saying here...yes, this is the same WASP, but there is no denying the fact that Blackie Lawless is a completely new man on this album, and that man is a man of faith.

First, I feel it is important to note that not all of these songs are originals to Blackie and his band, and as such all do not lyrically fit the rest of the album. "Burn" is a cover of a Deep Purple song that was actually supposed to be on a previous album but didn't make the final cut. "Promised Land" is a Chuck Berry song that was also recorded by Elvis Presley, although WASP has definitely metal-ed the tune up considerably, while still staying true to the root sound. These songs don't specifically fit with the Biblical and Christian themes of the rest of the album, but "Burn" at least has a similar substance and feel; "Promised Land" is just one of those random, oldies covers that Blackie seems to like to throw out there every now and again.

As to the rest of the album, it is impossible to deny where Blackie is headed here. From the album artwork's depiction of the Four Horsemen of the Apocalypse, to the lyrical content of the original songs, Blackie is obviously on a trip through the Bible and prophecy, especially as presented in Revelations.

"Crazy" starts the album out with a riff that longtime WASP fans are going to swear they have heard before...largely because Blackie basically rips himself off, using a blatant "Wild Child" riff for the intro. The vocals, the guitars, the drum sound...pure classic WASP here, and this is, in my opinion, the perfect lead in for this record, because I am sure there are a LOT of WASP fans out there who think Blackie may just be crazy when they dig into the lyrics of the songs that follow.

"Live To Die Another Day" is another classic-sounding WASP track that starts off with a slight lyrical rearrangement of Psalm 23, with Blackie then singing, "Hellhounds are running close to me, On the trail of my life... I was hellbound but now I'm running free, From Satan's angels of light...". This song is followed by yet another pure WASP-sounding song in "Babylon's Burning", which is lyrically straight out of Revelation. In the liner notes, Blackie makes it clear that he thinks so many of the things that have been going on around the world are directly tied to Bible prophecy and with this song, he really strives to make his point. He even goes so far as to tell the listener/lyrics reader where the last part of his lyrics come from: Revelation 13. Powerful stuff....

"Burn", as previously mentioned, is a cover of a Deep Purple song, but after being given the WASP treatment, it fits perfectly here, although I will admit it was a bit odd having "Babylon's Burning" followed by "Burn"...that's a lot of burning going on, especially since the next track takes us straight "Into The Fire"! This song is the band's first hint at a ballad, although like a lot of WASP "ballads", it isn't exactly a slow, plodding song by any means. One of my top two or three favorites on the album, this is yet another strong effort, especially lyrically, and Blackie's voice continues to remain strong and easily recognizable.

"Thunder Red" picks up the pace once again, and "Seas Of Fire" continues that pace before "Godless Run", the true gem of this album, slows things way down once again. Musically, "Godless Run" sounds like it could have come off the WASP masterpiece The Crimson Idol, but lyrically, there is no WASP song past or present that more speaks to where Blackie is at now. This is an achingly personal, autobiographical song that finds Blackie pouring his heart and soul out, explaining the life he once led.

I truly wish the album had ended with "Godless Run", as I think that would have made the album a nearly flawless 10. However, as Blackie has often done, he throws out an oddball cover here with the Chuck Berry track. Not terrible, but it is a distraction to say the least.

I have been a fan of WASP since the very beginning and it has been very interesting to watch Blackie's progression and searching ever since the Headless Children album (check out the Four Horsemen reference in that title track...). Blackie has shown an anger with religion in the past, as he has stated in interviews, but things have changed. That is not to say that all of WASP's material from this point on will be Christian-based or Christian-themed, but it would seem fairly safe to say that Blackie knows where he is headed personally and spriritually, and one has to expect that his band will head in a similar direction, or at least steer clear of a lot of the territory it travelled in the past.
Rating: Crank this to a very powerful 9! Were it not for the Chuck Berry cover, this would likely be a 10...

For any who wonder if Blackie preaches what he now practices, check out the following video:

Return To Reviews Index
Posted by arttieTHE1manparty at 8:48 PM