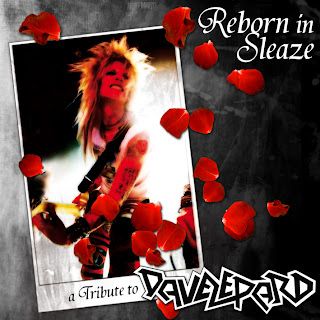 (c) 2011 Street Symphonies
It's hard to believe we are coming up on the sixth anniversary of the death of Dave Lepard, the charismatic original lead vocalist of Crashdiet.  January 20, 2006 seems like a long time ago in some respects, and yet it seems not all that long ago that Crashdiet was bursting onto the scene and playing a massive role in the explosion of the Swedish sleaze scene.  Following the well-received, self-titled EP that the band released in 2001, they EXPLODED with the amazing Rest In Sleaze album in 2005, the last with Lepard as the vocalist.  It is from this record that this tribute album is created; this tribute is a complete track-for-track re-creation of Rest In Sleaze with bands who were contemporaries of Crashdiet or who burst through the door that Crashdiet had kicked open.

Due to the fact that most people who are going to purchase this album are already fans of the band, I am not going to really get too deeply into the style and sound of each song, unless it is significantly changed by the contributing band.  Rather, I intend to speak more to the performance of each band and the overall feel of the album and I will attempt to give each track at least a cursory rating on an individual basis.

Things start off with Midnite Sun, a relatively unheard of band, tackling one of the band's better known songs, "Knokk You Down".  While the music is extremely faithful to the original here, I can't say I am a big fan of the vocals, especially on the chorus.  The lead singer sounds like he is being strangled a bit as he tries to produce extra power on some of the higher notes here.  Is this the usual sound of Midnite Sun?  I can't say, as I have never heard these guys before.  Track rating:  6.5

Next up is Speed Stroke's take on "Riot In Everyone", which has always been one of my favorite Crashdiet songs.  Speed Stroke is again very faithful to the sound of the original, but I want to comment that the guitar work on the solo here is excellent, and the bass work is phenomonal!  I really like the way the band put this song together and the vocalist is far more than simply competent here.  I will be tracking this band down to hear how they sound on their own material, as I was very impressed here.  Track rating:  9

Skull Daze, a band which I have liked for quite some time, lends their considerable talents to "Queen Obscene/69 Shots", which is, once again, one of the best scorchers that Crashdiet has recorded.  The vocals here are closer in attitude to what people expect from the first Crashdiet record and the music, while a bit simple, is still pretty faithful to the original overall.  There are no suprises here, but it is still a fun listen.  Track rating:  7.5

Peep Show is another band that I am not overly familiar with, but they do a solid job with "Breakin' The Chainz".  My main complaint here is the guitar solo is changed up quite a bit from the original and the gang vocals are missing.  To me, this detracts quite a bit from the feel of the song.  I am not looking for a complete clone here, but those big vocals are part of what I love about this song.  The lead singer is definitely good and he has a lot of snarl and attitude to his voice, which I love.  I will also be tracking this band down soon...  Track rating:  7

Superhorrorfuck...well, they are a band that is kind of in their own league, and I was frankly surprised to see them on this tribute.  It's not that they can't perform this style of music, as they actually do a credible job overall, but these guys are more known for their horror-punk style than the sleaze they contribute here with "Needle In Your Eye".  Lead vocalist, Dr. Freak, uses his lower, snarling register to good effect here, and I like the pounding drums which are especially evident at the end of the track.  This is one of the more groove-based songs from the original album, but Superhorrorfuck dismisses a bit of that style for a more straight-forward sleaze sound that works pretty well.  Not as faithful musically as some tracks, but a pleasant surprise, nonetheless.  Track rating:  8.

Speaking of horror-punk, Ragdolls are up next with "Tikket".  If you go back and re-read my review of this band's album, everything I said then still stands true now.  The talent is definitely there, especially musically, but Vikki Violence's voice just lacks a lot of emotion or inflection, so it kind of falls flat on this song.  Musically, the band absolutely shreds this song to pieces and I really like what they are attempting to do here.  I'm not going to skip the effort by any means, but I just wish Vikki did more with his vocals than growling and snarling in a "hey, I just gargled with glass" kind of way.  Track rating:  6.5

"Tast of cyanide" is part of the chorus to the song "Out Of Line", so perhaps it comes as no surprise that Cyanide 4 takes on this song.  As such, these guys turn this song into more of a straight-up hair metal song than a sleaze song, which should be expected by anyone who has heard this very good, very talented band before.  The solos are a bit cleaner than the sleaze-drenched sound Crashdiet utilized on the original, and the vocals are definitely smoother, but the band makes it work.  This is the closest any of the bands really comes to changing the overall feel and sound of a track, and they do it well.  I like what Cyanide 4 has done here.  Track rating:  7.5

I don't know anything about DNR, but they contribute to this tribute with "It's A Miracle".  This is easily my least favorite effort on the album as it sounds like it was rushed a bit.  The vocals are off, for a lack of a better word, and the backing vocals are out of tune in spots.  The lead guitar player shows some flash and flair on a very short solo here, but overall I am just not impressed with this effort.  Track rating:  5

Hell In The Club has really made a name for themselves over the past couple of years and they contribute one of the top songs to this disc.  These Italians do an excellent job with "Straight Outta Hell", adding a bit more distortion to the guitars and vocalist Dave Moras lends an edge to his otherwise generally smooth vocals to really nail this song.  Hell In The Club is hitting on all cylinders on this track and it is definitely a worthy contribution.  If you haven't done so yet, you should track this band down as soon as you can...really good stuff.  Track rating:  8.5

Shining Line is yet another band I know nothing about, but I will be seeking them out because they have obvious talent.  Once again, a bit more of a hair metal band than a sleaze band, but they do a very good job with original album closer "Back on Trakk".  The vocals lend themselves more to the style of a Ron Keel than anything that comes immediately to mind, but since I love Keel, that's not a problem at all!  The guitars are very good, if a bit simplified on the solo, and the band has a very solid feel overall.  Definitely a band I want to hear more from and a good one to include here.  Track rating:  7.5

The closing track is a bonus track by Swedish veterans, Black Rain.  "Lost Horizons" is a song that can be found on the Crashdiet Unreleased Demos compilation, and it is easily one of my favorite songs these guys ever recorded.  Why it didn't make it onto an album, I am not sure.  Black Rain absolutely nails the feel and emotion of this ballad, which is not surprising as I think Black Rain is quite possibly the reigning kings of the Swedish glam/sleaze scene now.  This is a killer, killer song that wraps up this very good tribute in excellent fashion, and it also gives casual fans a song they may not have heard previously.  Track rating:  solid, solid 10.

Overall, this is an excellent tribute to a voice that was silenced far too soon.  While I have enjoyed every Crashdiet album that has been released, both with and without Dave, there is something about Rest In Sleaze that always calls me back in a way that the others don't (with the exception of the equally excellent Generation Wild album).  Reborn In Sleaze is not only a great way to remember Dave and his music, but it is also a chance for people to hear some new bands doing songs they may already be familiar with.  Street Symphonies did themselves and the memory of Dave Lepard proud with this tribute, and I strongly suggest sleaze fans track this down.

Rating:  Tributes are tough to rate as a general rule, but I would strongly recommend cranking this one to 7.5, which is just a notch or two below what I give the original!  (by the way...pull out a calculator and do the math...7.5 is almost EXACTLY what the track average is!  Just sayin'....)