JETBOY "Now And Then" 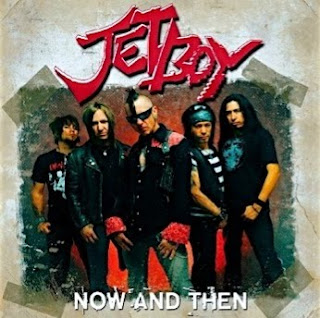 Jetboy is one of those bands that seemed to always be on the cusp of breaking out.  These guys had a HUGE following in their native San Francisco as well as a strong support base on the Sunset Strip back in the mid-80's, managed to get several songs on movie releases (five different tracks from the Feel The Shake album were spread out between Tom Hanks' movie The Burbs, and the lesser-known Tony Danza flick, She's Out Of Control), and scored a couple of decent video hits on MTV's Headbanger's Ball.  But between the death of original bass player Todd Crew (found dead in Slash's hotel room...), and the grunge phenomenon of the early-to-mid-90's, Jetboy never managed to get the traction that was necessary for them to fully hit the big time.  Too bad, as Jetboy was one of the more original sounding bands of the era, not coming off like a cookie-cutter clone of the Poisons, Warrants, or Wingers of the time.

Probably as well known for Mickey Finn's sky-high mohawk as they were for most of their musical catalog, Jetboy combined the glammy edge of bands like Hanoi Rocks and the New York Dolls with the punk and sleaze look of a lot of the underground Hollywood bands.  As such, their sound was a hybrid that always came off as fresh and original to these ears, even when I didn't like every song the band put on tape.  On this collection, Demon Doll manages to capture the best of the band, for the most part, with seven tracks coming from the band's two major label releases, 1988's Feel The Shake and 1990's Damned Nation.  "Feel The Shake", "Heavy Chevy", and "Evil" are the band's bigger songs, at least as far as airplay goes, and "Stomp It (Down To The Bricks)" and "Make Some Noise" are a couple of the band's more popular songs with their fans.  Personally, I was really happy to see "Snakebite" included here, as I think it's one of the best songs in the band's catalog.  "Bullfrog Pond" was an interesting inclusion as well.  What really makes the album, at least for me, is the inclusion of the hard-to-find EP Off Your Rocker studio tracks and the previously unreleased "Dying Inside".  All four of these songs are very much in the vein of the harder-edged material that made Jetboy popular with their fans...and maybe kept them off of radio...with Finn's gritty vocals and the guitar tandem of Rowe and Rod still ripping things up.  With no ballads to bog this collection down, Now And Then is a full-tilt rock collection that I think casual fans will find a lot to like about and one that will give new listeners a solid cross-section of material to choose from.

The project is not perfect, however, as there was still room left on the disc to include a couple more tracks, which I think would have been smart.  "Bloodstone", from the Feel The Shake album, would be a logical inclusion, since it was included on a movie soundtrack and is one of the more well-known Jetboy songs.  I also think a couple of other tracks from the band's Lost And Found collection would have been nice, especially since so many of those songs are not available anywhere else and are now out of print ("Little Teaser", "Cuts Me Down", and "In The Alley" are some of my faves from that effort).  Still, this is a pretty good sampling of what Jetboy had to offer, and I don't have a lot of problems with the musical choices.

While I normally am not a fan of Demon Doll Records' projects, this is one that I think the label generally got right, at least on the musical side.  The production is crisp with no volume level problems between tracks of varying ages (in some cases, 20 years has passed between recordings).  I also think the song selection was pretty much spot on, as the "hits" (if you can call them that) are here, and the inclusion of the 2010 Off Your Rocker EP made the collection that much more solid, as did the unreleased track.  However, as far as packaging goes, I was expecting a lot more as far as photos, band history, and lyrics, NONE of which is included.  This is a MAJOR problem I have with pretty much every release I have ever gotten from Demon Doll...and these are official releases, not promos.  Considering the label charges full price ($11.99-14.99 for most releases), you would think they would put some more effort into the packaging, especially on re-issues and compilations like this one, to make them more desireable to those people who already have the original albums.  To be honest, if I was a digital person and not a CD person, there is really no reason to buy the CD rather than just download the music.

Rating:  Since the music is what really matters to most people, I will still crank this to 8 based on the new song, the strong selection, and the inclusion of the EP.  As far as Demon Doll Records' efforts in the packaging department...I wouldn't rate them more than a 5 or so...

Back To Reviews Index
Posted by arttieTHE1manparty at 1:18 PM