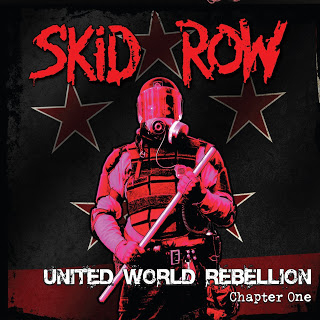 
Let's face it.  Skid Row has been in a slump.  No, that's not a fair or accurate statement.  Skid Row has been in a NOSE DIVE since they parted ways with Sebastian Bach.  I'm not interested in rehashing whose fault it was or if Bach quit or was fired.  The plain and simple fact is that of the two factions, Bach has clearly had the better of things and still draws a pretty big crowd wherever he decides to play.  Meanwhile, Rachel Bolan, Snake Sabo, and Scotti Hill have been plugging away with drummer Rob Hammersmith and Johnny Solinger on vocals, releasing one bad and one atrocious album and playing to crowds about 20% the size they used to.  Bach and his band still rip through the classics with ease, sounding all the world like it's still the 80's or early 90's, while Skid Row, to be honest, struggles with a lot of the classic material and then mixes in songs that no one really knows from the last couple of releases.  So, to a degree, United World Rebellion Chapter 1 is an EP that could either breathe a bit of life back into the Skids machine, or that could drive a nail into the coffin of one of the truly dynamic bands of the hair era.

It COULD do either of those things...but it really doesn't do either one.

Musically, the band is tight; as tight as they have ever been, in fact.  Things come storming right out of the gate with the thunderous "Kings Of Demolition", which sounds to me like it could have been written in the Subhuman Race sessions.  Rumbling bass, pounding drums, and some scorching lead guitar work explode from the speakers from note one and Solinger really establishes himself with an angry edge to his vocals, not attempting to sound like Bach in the slightest bit yet still managing to display a bit of that cocky swagger that Bach always delivered whenever he stepped up to the mic.  "Let's Go" is a revved up, punkish rocker that again finds the band hitting on all cylinders, charging through this high speed number, and once again, the smoking lead guitar work leads the way.  I've got to admit, I'm pretty pumped up by this point, really ready for the remaining three tracks to reestablish Skid Row as a band of significance in my CD player.

But then the ballad hits.

Now, Skid Row ALWAYS had the big, lighter-in-the-air ballad to fall back on and to suck the ladies closer to their guys at the concerts, but on the last couple of records, I really got the feeling that Skid Row was trying to move away from being "that" band.  But then here, on this EP, Snake and Bolan seem to be taking a direct stab at their past, almost feeling like they are trying to rewrite "I Remember You".  In fact, I would almost swear this was written as a sequel as the musical similarities in places are eerie.  The problems here are 1)  Solinger's voice does not have the charisma that Bach's did in handling a track like this (or one of the band's classics when performing live, for that matter), 2) the lyrics are just not good and simply repeating the title over and over and calling that the chorus is either the height of laziness or an example of a band that has run out of creative juice, and 3) as I said, the song feels like a rewrite, which again seems to indicate the band's well may have run dry.

"Get Up" starts of strong with a nice mid-tempo groove, some excellent bass work from Mr. Bolan, and a nice angry snarl in Solinger's voice, but, once again, the ridiculously simple chorus kicks in at a tempo that doesn't match the rest of the song, the weakest guitar solo section on the EP is added in, and the song essentially dies.  The band really seemed to be reaching for more of a modern sound here and end up killing off what had the potential to be one of the best two songs here.

Things finally (mercifully?) end with "Stitches" which has a bit of the same vibe as the self-titled album did, but without much of the soul of those songs.  Bolan again really powers the band through this track, with some thunderous bass work setting a nice, tight groove for the rest of the guys to follow along in his wake.  Hammersmith is steady here, as he is throughout the record, but the leads here don't equal the strong moments of those opening two tracks, and again the lyrics are definitely not the strong point of this track.  Solinger sounds fine, but he doesn't have a lot to work withhere, which is too bad.

The production is top notch, although Solinger's voice seems mixed a bit too hot in spots and so it sounds to me like he's over-modulating at times.  The musical performances are good-to-great for about 3/5 of the record...just not always on the same songs.  The packaging is another danged digi-pack, but what's the point in complaining now as this is obviously the direction things are going to end up going for everyone.  Lyrics are included as are individual member pictures and a band picture, so that's all good and well.  So everything seems to be headed in the right direction, at least for the most part.  Are they all the way back?  No, and they have a good ways to go.  However, this is Solinger's finest hour vocally, and some of the songwriting seems to be coming back, even though the lyric writing leaves a LOT to be desired for the majority of this 5 song effort.  The thing that scares me most, however, is the fact that this is just an EP and you have to ask yourself if these were the BEST of the songs that they had come up with so far.  Were there worse songs that were left behind?  Did they leave the best songs for U.W.R. Chapter 2...or Chapter 3 (the band says there will be "several" EP's like this one coming up)?  One can only hope there are better tracks remaining because if this is truly the best that Snake and Rachel have left, then I'm afraid the band has run its course unless someone by the name of Sebastian decides to take the boys out on a reunion tour.

Rating:  Rock this on to 6; it's not excellent, but it is easily the best thing this band has done since the departure of Bach.

Back To Reviews Index
Posted by arttieTHE1manparty at 6:58 PM