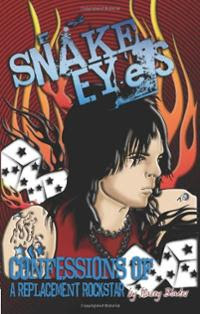 Stacey Blades, the ex-guitar player for L.A. Guns and Roxx Gang took the time to put pen to paper and released this book, Snake Eyes: Confessions of a Replacement Rockstar as an independent author, regaling readers with stories documenting his rise from the Canadian rock-bar scene to making the jump to the (perceived) big time by joining Roxx Gang.  After slogging away in a band that had huge potential...but no apparent direction or follow-through...Blades made a career-defining leap when he took the opportunity to replace founding guitar player, Tracii Guns, in LA Guns.

Most of the stories here are new, at least to me they were, as not a lot has been written about L.A. Guns AFTER Tracii left because, let's face it, the Hollywood scene had pretty much been shoved to the back burner by the time Stacey came on board.  That being said, Stacey has several cool tales to tell about time spent overseas with the Guns, working on the albums, and his personal relationships with Phil Lewis, Steve Riley, and other members of the band, and what it's like living in...and trying to get out of...Tracii's shadow.  And, speaking of relationships, Blades also offers up humorous advice for dating (or more specifically NOT dating) psychos, his dealings with his Roxx Gang band mates, and the handful of life-long friendships that help define who Stacey Blades is as a man and a musician.

Scattered throughout the book are several black and white photos, which are nice to check out, and show Stacey at various points throughout his career.  Also included are quotes and outtakes from various friends, road crew members, family members, and band mates, which add even more color and reality to the stories spun by Blades here.

A couple of negatives do pop up in my mind.  First, I can't believe how large the print is in this book (it's also double spaced, I believe).  Now, while it makes it an extremely easy read, it also makes the book's length a bit deceptive as there would probably be 20 or 30 pages knocked off the book's length if the font size was even an 11 or 12 point font.  Second, the book could have benefited from a bit more editing, as there are still several spelling and grammatical errors throughout the book.

These minor complaints don't detract from the enjoyment people can take away from this book, and they do not stop me from recommending this book.  Hey, Stacey did this on his own, after all; I'll cut him some slack. It is a pretty short, quick read that I got through in just under two days.  I look forward to the updated version that Stacey mentioned working on when I got the chance to interview him a while back (read the interview here).  As the book ends, Stacey is still in the band and there is no inkling of his upcoming resignation, so I'm assuming there will be more tales to tell regarding this chapter in Stacey's life, as well as projects he may be currently working on.  And, who knows...maybe a couple of psycho stalker fans will pop up again in the extended version of the book.

Is it the best rock bio I have read?  Not at all.  Is it the worst?  Not even close.  Definitely worth checking out and a relatively cheap pick-up at under $15 from Amazon.

Self-published
Paperback
232 Pages
Posted by arttieTHE1manparty at 10:30 AM