3D IN YOUR FACE "Midnight Devils" 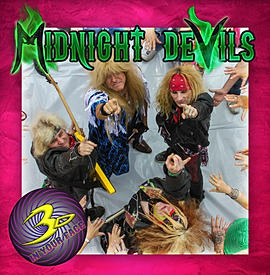 Since the late 1990's or early 2000's, I have watched 3D In Your Face perform at least half a dozen times, but I honestly don't think I was aware that the band regularly recorded.  Sure, I knew they had a CD or two at their shows, but I always assumed they were cover albums, so I never bothered to pick one up.  Now I realize I need to go back and get those CD's, because it turns out 3D In Your Face actually records their own music...and they do it surprisingly well!

The album kicks off with the rollicking "Forbidden City" which has a slightly modern feel to the band's take on the 80's rock scene, sounding like it was fashioned a bit after the sound coming out of Sweden and the rest of Europe.  Not that this is a bad thing by any stretch, as some of the best "80's" hard rock has actually come out of Europe in the 2000's, but I think you get what I am saying.  The rest of the album, however, is pure throwback sounds, from the big guitars to the layered, often gang-shouted vocals, and thumping drums.

A prime example of this 80's worship can be found on the follow-up track, "Generation Durt".  From the cowbell intro to the backing vocal "aahhhs", this is a song that fans of the genre will feel like they may have heard before, but without being able to identify why.  There is a nice guitar solo in this song followed by a bit of a distracting kick drum fill before the vocal bridge of "hey, hey, hey, we won't go away" kicks in, with the regular chorus layered over the top.

Even better is the next track, "In Your Face", which is something of a signature song for the band, and one of the very best songs on this album.  Heavier on the bottom end than most of the tracks here, the guitars have something of a Jake E. Lee quality to them, and the bass and drums are locked in throughout.  Lyrically, the song is rather tongue-in-cheek, as are several of the songs here, always a bit raunchy but never outright filthy or packed with vulgarity or swearing.  Again, the listener is given a nice guitar solo that could possibly have benefited from just a touch of distortion, and a nice bass line as well.  This is a really good song that showcases the talent of the band musically.

Not overlooked is the power ballad, as "Always Brings Me Back:" covers this territory nicely, if rather non-originally.  The keyboard intro is almost a note-for-note rip-off of Kix's "Don't Close Your Eyes", although the arrangement is a bit different (you will understand the second you hear it).  Also included is the sentimental piano interlude/intro, featured here as the lead-in for "Underneath The Stairs", a chuckler of a song about "going down to Hell, under the stairs".  A definite head-banger as far as the music goes, once again, 3D manages to pull off a humorous song without having to revert to toilet humor, a la Steel Panther, which is greatly appreciated.  "Squeeze Me Dry" is about as raunchy as the band gets, and even here it isn't straight from the gutter.

Of course, what would an 80's inspired album be without the big anthem?  Album closer, "I Still Believe In Rock N Roll" is exactly what the doctor ordered if "God Gave Rock N Roll To You" is your kind of song.  Not a rip-off at all, but definitely that fist-pumping, everyone on their feet and banging their head kind of song that should be how 3D closes every one of their shows!  Had this come out in 1988, there is a chance that this could have actually garnered some airplay, as it is a very nicely structured song, performed in great fashion with some excellent guitar work scattered throughout.  A very nice close to a surprisingly strong album.

In the end, maybe that, as much as anything, is what I appreciate about 3D In Your Face; they can make fun of themselves and have fun with a great musical genre without turning it into some kind of triple-x show.  Again, having seen the band live on multiple occasions, I can say that I wouldn't have any problems taking a tween or teen to one of the band's shows to introduce them to the music and the show.  (The band does about 90% covers in their live show, which range from very good to EXCELLENT, and are well worth catching.)

Yeah, the wigs aren't really all that great...and the costumes are kinda corny...but make no mistake, Omaha, Nebraska's 3D In Your Face is a real band, regardless of if their hair is or not!  There are no massive vocal ranges here, but plenty of gang shouting and mid-to-upper tenor singing that will get your air guitar and air drums rocking in several places.  The guitars are very good and the rhythm section is especially tight throughout.  A nice pick-up, especially if you are looking for something a bit lighter in lyrical intent without leaving you feeling shortchanged musically.

Rating:  Rock this to a fun 6.5 and don't take things so seriously!

Back To Reviews Index
Posted by arttieTHE1manparty at 6:04 PM