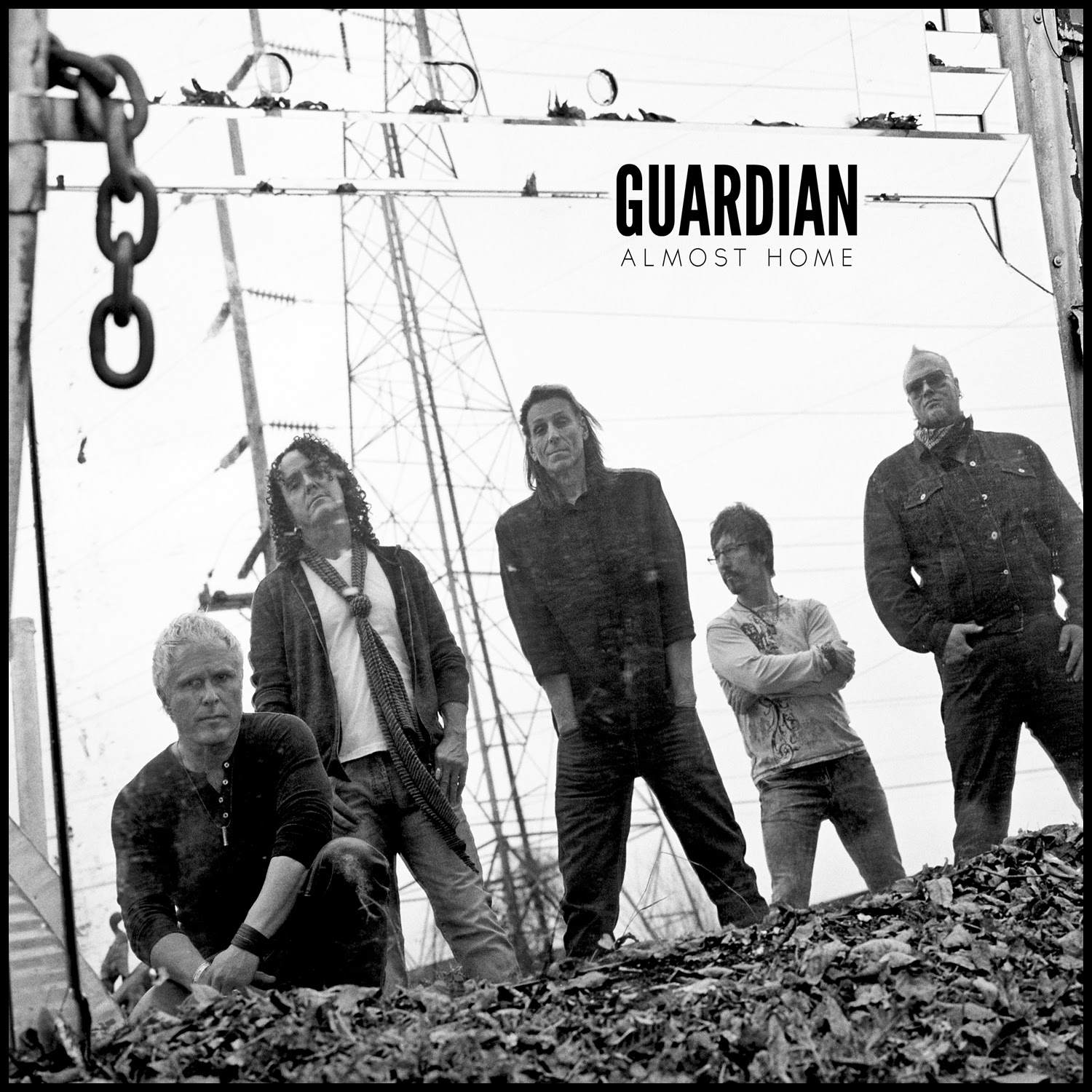 Guardian returns with their first full-length album in SEVENTEEN YEARS, with the Kickstarter-funded Almost Home.  There have been teaser releases prior to this, most notably Three To Get Ready, a three-song EP that came out in 2011, but little to nothing had come from the Guardian camp in so long that most people had assumed the band was dead and buried, especially with front man Rowe now reunited with his other band, AdrianGale.

Dead and buried, they are not. Guardian is definitely alive, and mostly well.

Let me start off by saying that for anyone who is looking for another Fire & Love or Miracle Mile, there is very little here that is going to satisfy your palette.  In fact, nothing here has the "hair" feel to it, although there are a few melodic rock moments.  Instead what we are given with Almost Home is a collection of songs that range from the modern hard rock feel of "Boom She Said" to the bluesy-yet-still-modern lead single, "The Real Me" to the straight up acoustic ballad, "Almost Home"...and a bit of everything in between.  I'm not sure "eclectic" really covers the overall feel of this album, as I felt somewhat jerked all over the place as I listened to this record the first several times, never really given a chance to find a groove to set my attention into.  For some that's a great thing; for some a distraction.  For me, it was mildly annoying at first, mostly because I spent so much time searching for the Guardian of my youth, but never really found it (though it does come close in spots).  That irritation dissipated after a time once I figured out where the best tracks were located and filtered out those elements that really do nothing for me.

To be fair, this is a band that has morphed (some say matured) with every release since Rowe replaced Paul Cawley after the oft-forgotten debut record, First Watch.  Guardian has gone from the hair metal of Fire & Love to the more melodic hard rock of Miracle Mile, to the largely acoustic Swing, Swang, Swung, to the modern rock of both Buzz and Bottle Rocket, so for the band to shape-shift once again didn't come as a huge surprise to me.  However, to find the band trying to cover SO MANY bases all in one record was a bit of a shock to the system.

"Boom She Said" kicks things off with a funky little bluegrass-styled guitar intro and NASA control tower recordings before punching you in the face with a massive modern rock guitar riff and thundering drums, pulling Rowe's raspy vocals into the fray in a frantic rocker that had me nodding my head and grinning from ear-to-ear.  No, this wasn't hair metal, but dangit, these guys still HAVE IT!

The next track, "The Real Me" still rocks to a degree, but it is more in a bluesy-yet-still-uptempo style that I wasn't prepared for following "Boom...".  To be completely honest, I don't particularly care for this song and generally skip it, largely because of the way the song is structured and Jamie's use of the "aahh" sound that drives me nuts.  Petty?  Probably, but I really just don't like this song and would NOT have used it as the lead single because I don't think it really reflects the rest of the album that well.

"Little Things" starts quietly, building volume, if not intensity, as it follows a simple drum and bass line placed just below an equally simple acoustic guitar riff.  Rowe's vocals are powerful and emotive here, taking us through the first chorus before a slide guitar shimmies in for a brief appearance, then disappears just as quickly.  The song is nearly half-over before the "electricity" is added to the song and the track comes alive.  With its somewhat 90's alternative meets 80's ballad approach, this is easily one of my favorite tracks, as it really shows the musical skill of this band when it is firing on all cylinders.

"Wonderful" continues the alt-rock sound, especially in the tone of the guitars, reminding me of the Newsboys to a degree.  Rowe's vocals are spot-on once again, and the music, while not full of screaming guitars, rocks enough to satisfy the melodic rock crowd, yet maintains enough pop sensibility in its richly layered vocals and a song structure that borders on modern praise-and-worship, to keep the mellower crowd engaged.  Again, a top five track for me.

(If you are keeping score, three of my personal favorites are found in the first four tracks...)

"California Rain" is next up and it sounds like a Santana song to me, complete with Spanish guitar and a 1970's flavor that is unmistakable.  While musically on target, this is a style that does nothing for me, and I honestly skip it now.

"Show Us What You Got" is an all-too-short little shred fest from Mr. Palacios that leads nicely into the other true rocker on this album, "King Of Fools".  This track is as close to "old" Guardian as the record ever gets and it is a great track.  Palacios goes off on a great solo run after the second chorus, and Ney and Bach are amazingly solid in the rhythm department on this song.  Edging slightly past "Boom She Said", this, for me, is the pinnacle of the album, and, as I said before, I would have been perfectly happy with an entire album full of this 90's-era Aerosmith-inspired guitar rock.

Another interlude follows, but it is a complete waste of time for me, as it consists entirely of a phone call on an answering machine.  Auto-skip would be a great invention for me at this point, as I would program that sucker to blitz right past this every single time.

"Paranoia Kills" is the last of the big rock numbers on the record, and it is another decent modern rocker with a snappy beat and distorted guitars and vocals, with some effects thrown into the mix for good measure.  This track reminds me a lot of the sound the band was chasing on Bottle Rocket, mixing guitar rock with modern instrumentation and production.  An excellent song that I would say is probably my third favorite here, just behind "Boom..." and just ahead of "Little Things".

"Price We Pay" is another great song that also slots in with the best of the songs here.  More of a mid-tempo melodic rocker, this song and it's successor, "Free", finish off the best of the record for me.  In fact the six songs I've indicated as my personal favorites would have made for a KILLER EP, with the interlude "Show Us What You Got" being tossed in to take up space.

The final interlude here is another total waste of time and disc space for me, and once again, I immediately skip it.

Album closer, and title track, "Almost Home" is a great acoustic track that finds the band in contemplative mode, reminding me a lot of Extreme's "Hole Hearted" in some ways, and is an excellent way to round out the record.

As a Kickstarter backer of the project, I have the digital download version AND the CD version of this album, so I am able to comment on packaging as well.  We have a digipack here (the norm now), with a 12 page booklet filled with band member photos, lyrics, and credits.  The production is top notch, with Perrenot (who has been a band member since 2008) doing an excellent job of keeping the record fresh and crisp sounding with no muddiness or loss of voice for any of the instruments.  Kudos, Jamey...

As I said way back at the beginning of this review, the record is mostly good.  If I could, I would drop "The Real Me", "California Rain", and two of the three interludes, which I think would leave me with a neat-and-tidy 8 song record with everything being very good to great.  As it is, the record isn't horrible by any means, but it is likely not what Guardian fans of old thought they were going to get.  I like it, but I honestly prefer the recent AdrianGale album, Sucker Punch, to this one.  Given more time, and some subtle use of the skip button, Almost Home may grow on me further.  As it stands, it is a top 5 Guardian disc for me, ahead of both Bottle Rocket and Buzz, but in no way threatening Fire & Love or Miracle Mile for catalog supremacy.

Rating:  Crank this to a 7 and let's hope this isn't the last we have heard from this talented band that can still bring it when they want to.

Posted by arttieTHE1manparty at 2:01 PM