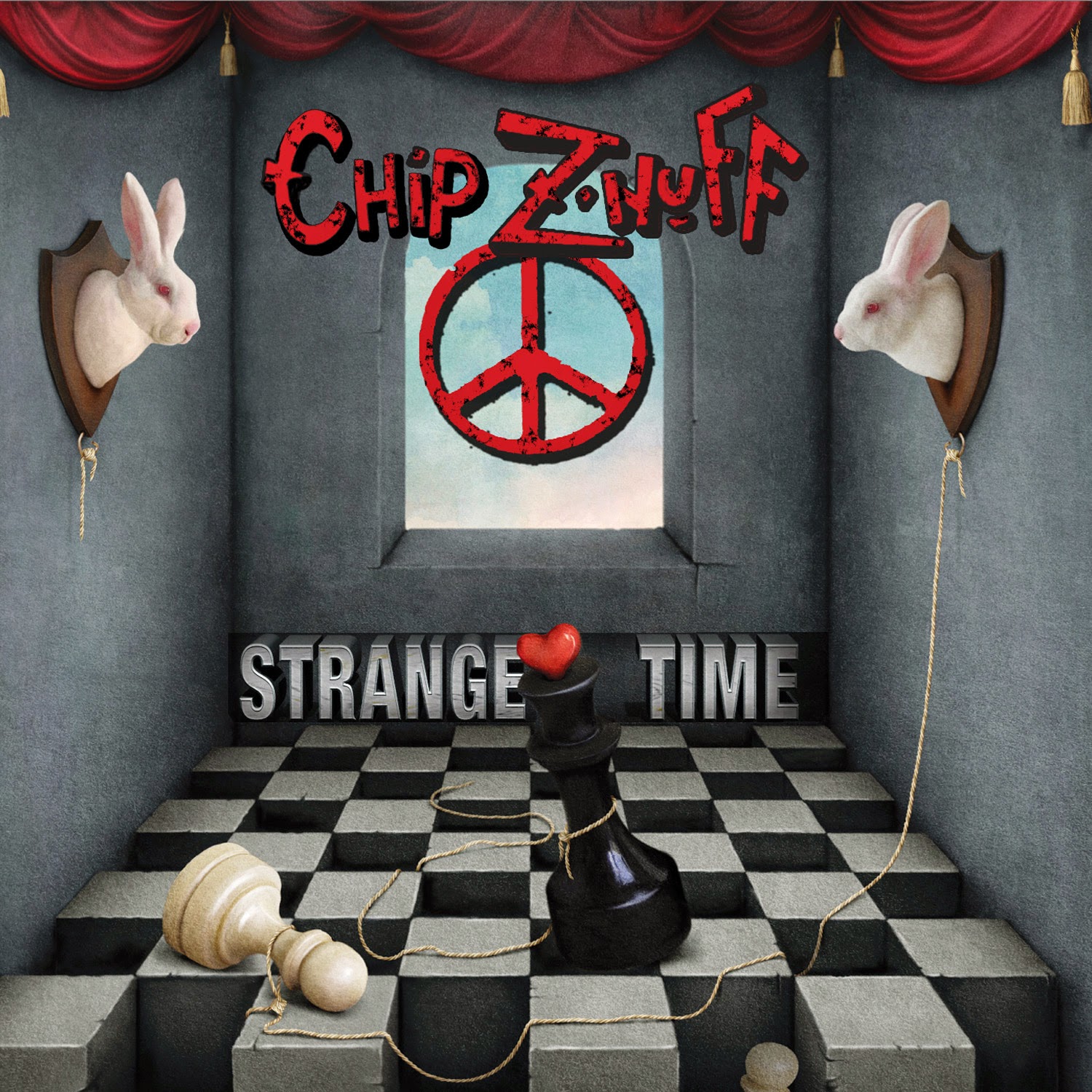 I suppose it was only a matter of time, really, before Enuff Z'Nuff founder (and namesake) Chip Z'Nuff took the cue of his former friend/bandmate/lead singer, Donnie Vie, and released his own solo record.  I mean, in this day and age of 80's rockstars making comebacks, writing autobiographies, and heading out on reunion tours, a solo effort by a name from the scene is not really that uncommon.  What IS uncommon, however, is when said artist decides to completely forego the sound that they are known for and branch out into something totally different.  That is the path Chip Z'Nuff has chosen to take here.

I want to make this 100% clear right from the start:  THIS IS NOT AN ENUFF Z'NUFF RECORD.  End of story.  If you are looking for the shiny, jangly, bubblegum-pop-meets-Alice In Wonderland-at-a-glam-concert style that EzN has become known for, do not pick this record up.  You will be sorely disappointed.  Trust me.

There are some good moments here, to be sure, with the cover of the Kinks "All Day And All Of The Night" being chief among them, as Robin Zander sounds excellent on this slightly punked-up version of the classic track, and the guitar solo is catchy and crisp, showing that Z'Nuff is equally adept playing 6 strings rather than just the usual 4 on his bass.  "Rockstar", which features Biff Butler (son of Black Sabbath's Geezer Butler) on vocals, is the lead single and video, and is not really a bad song, but Enuff Z'Nuff fans will likely not really understand what is going on.  I mean, the video LOOKS like Enuff Z'Nuff, Chip Z'Nuff is playing on the song, but the rest of it is just not the same.  Check it out for yourself and see if you agree.


After that song, things get very 70's sounding, and everything starts to run together for me.   The title track, "Strange Time" drops the album into low gear and starts the downward spiral into stoner hell for me.  Droning, repetitive, and filled with 70's-styled production, especially on the vocals, "Strange Time" really paints a picture of the struggle that I go through from tracks 3 through 9 here.  "Dragonfly" is an airy, almost prog tune with some serious blues to the bass line and a trippy, psychedelic approach to the lyrics and vocals.  I can't tell you why I like this song, but I kind of do, as it just seems to infect my brain for some reason, much like certain Doors or Pink Floyd songs do (even though I don't like the Doors or Floyd as a general rule).  The problem is that the song just bleeds into the next track, "Still Love Your Face", which is very 70's Beatles sounding to me...which I am not a fan of...and then this in turn seeps over into "F...Mary...Kill", a weird song written by Z'Nuff, Howard Stern, and Steve Miller.  When it says "co-written by Steve Miller", what it means is that the strangely hypnotic and tripped out tune is a total (and intentional) rip-off of Miller's "Fly Like An Eagle" in structure and the vocal pattern, with a looped drum machine beat and some off-the-wall lyrics.  Again, not EzN at all, but a modernized take on a 70's classic that I imagine the stoners are going to love.  Me?  Nope...too dang long at over 7 minutes, although it would be the perfect snooze bar song on my alarm clock because it will definitely put me to sleep.

From there we go to "Anna Nichole", a two-minute long instrumental interlude that really adds nothing to the record, blending out of "F...Mary...Kill" and then right into "Strike Three", which reminds me of a left-over Tom Petty song.  The effects used on the vocals are annoying here, and I just can't get into this style at all. "Hello To The Drugs" just about has me pulling the plug on the whole thing, but I decide to stick around for the Kinks cover, which I am glad I did, because starting with this track, a weird thing happens...

Things get better all of a sudden.

The best material here is without a question the five tracks at the end which comprise the ADLER'Z'NUFF EP that was previously recorded...then shelved.  I am glad that these five tracks were tacked onto the end of this record, as they keep the disc from sinking...and keep me from falling out of my chair in a comatose state.

"My Town" is a hard-charging song that could be thought of as Cheap Trick on steroids.  Bozzio's vocals fit the music perfectly, and the slightly punkish rhythm bounces along nicely, driven by Adler's strong drum presence here, along with some nice, if unspectacular, guitar work from Z'Nuff.

The next two tracks are about as close to Enuff Z'Nuff sounding material as you will find on the entire Strange Time effort.  "Yesterday (Another Wasted Day)" is a really good track, featuring that sixties-pop inspired rock that EzN made their signature sound in the 80's, The somewhat heavier guitars have a modern buzz to the sound, which actually works well, but there is no denying the catchy jangle-pop sound that is present here.  The same can be said of the slightly darker sounding "The Game", which is, again, a really good song featuing a relatively sharp contrast between the shiny-happy vocals and bouncy melody layered over the top of the edgier, modern guitar tones.

"Tonight We Met" is a mini-GnR reunion of sorts, as Adler and Z'Nuff are joined...sort of...by Slash who contributes a "sample guitar solo" to the song.  What that means is the opening guitar riff from "Welcome To The Jungle" is lifted from that song and sampled into this one.  While I get the marketing gimmick of the idea, to be honest, the "solo" doesn't fit the song at all (doesn't distract from it, really, either...).  Again, we have a bouncing romp of a rock song here, with some auto-tuned female vocals on the chorus, and a sleazier approach to the overall style of the track, which is once again better than just about anything from the first 2/3 of the disc.

EP and disc closer, "The Pain Is All On You" is an interesting song.  Co-written by Paul McCartney (yeah, THAT Paul McCartney), this track features Z'Nuff on piano as well as bass and guitar, and it definitely has a bit of a Beatles vibe, but not in the Enuff Z'Nuff glammy type of way.  Its got more of a bluesy shuffle style to the music with the 70's-era Beatles psychedelic vibe to the way the instruments are arranged.  The weakest of the ADLER/Z'NUFF tracks, "The Pain..." is an interesting way to close things out and bring to rest a very uneven record.

What we have here, by Chip's own admission, is something more akin to a "stoner rock record" (duh!).  He goes on to say "What I have with Enuff Z'Nuff is special, but this is a labor of love.  I started writing these songs while going through every type of hard time--family, finances, relationships--and found moments of clarity while writing."  It's interesting to me the choice of the word "labor" in describing this record, because for me, that is exactly what it was to get through the first 10 tracks here...a lot of labor and borderline hard work at times!

To say that I don't like this record would be a bit unfair, as it does have it's moments.  Overall, however, outside of the ADLER/Z'NUFF EP, there really isn't a lot that the fanbase of Enuff Z'Nuff is going to like, and, quite frankly, the majority of this record isn't all that strong.  Here's hoping the band gets back together (perhaps with Vie???) and releases something great this year, because this isn't going to tide fans over.

Rating:  If this was JUST the ADLER/Z'NUFF EP (and the Kinks cover), I would say crank this to 7.5, but as an entire project, scale this back and rock it at 4.5.  It's just not good, at least for a non-acid dropping,non- pot-smoking rocker like myself.  Those last six tracks simply can't elevate the record out of the mire that is the first 2/3 of the record.

Back To Reviews Index
Posted by arttieTHE1manparty at 1:03 PM