SYNDROME OF FIRE "Save Me From Myself" 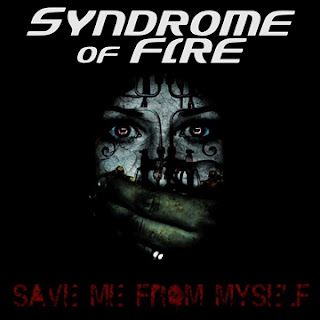 Give it just a minute, and you are going to say it.  Well, actually, you only have to wait about 30 seconds and you are going to say, "Man, these guys sound like Evanescence!"  And, yeah, I get it: powerful female lead vocals with some gruff, darker male backing vocals; melodic modern hard rock with chugging guitar riffs and programmed elements; big, pounding drums; some artistically placed strings and keyboards.  Sure sounds like the formula Evanescence used to worldwide acclaim several years ago.  But to say that Syndrome Of Fire is an Evanescence clone is missing the mark, and it's also unfair.

I say it's unfair because it immediately attaches a couple of things to the band that really shouldn't be there.  First, its very hard to compare a small, independent band to the massive appeal that Evanescence had at their peak.  While I am sure that Syndrome Of Fire would be more than happy taking their message to the sizes of crowds that Evanescence played before, it really isn't realistic, especially with today's musical climate.  The second thing that is unfair is when you compare Syndrome Of Fire to Evanescence, you risk comparing them to the trainwreck that Amy Lee and her revolving door of members became after their second major label release.  Anyone else remember that disaster?  Who's in the band?  Who isn't?  Who quit...who was fired...are they even a band any longer....  Just a nightmare.  Syndrome Of Fire is not deserving of that unfair comparison, thank you very much.

Now, if you want to compare the musical abilities of the two bands...I can go for that.  And, in all honesty, there are similarities here, but with other elements mixed in as well.  Musically, they incorporate a few more electronica elements into their sound than Evanescence tended to do.  At times they remind me of bands like Garbage, I See Stars, or newer acts like Nine Lashes or Icon For Hire...but never do they sound like carbon copies of any of those bands.  The angry male vocals, such as those in "Run" reach a level of aggression never found in any of the previously mentioned acts, and Garbage and Icon For Hire, while also having female lead singers, don't have the complete musical package that Syndrome Of Fire possesses.  This, again, is a reason for the Evanescence comparisons; Syndrome Of Fire is a collection of talented musicians and some amazingly well-written music.

While the core of the group consists of Cassie Goetzke on vocals, Ryan McMahan on guitars, and Sonny Cutler on keyboards, they recruited some very talented friends to give them a hand when recording this EP.  Noah Henson and Lester Estelle are both members of the well-known group Pillar, with Henson also having spent time with country rocker, Brantley Gilbert.  Add in the talent of Aus, and this is a very high-level effort as far as the talent involved, despite the fact that there is no major label funding the effort.

The EP kicks off with the hard-charging "So Sorry", which in direct betrayal of the soft keyboard intro that leads the song in, features a crushing modern riff from McMahan, as well as Goetzke utilizing the lower-end of her vocal range throughout the first verse before unleashing the full power of her soaring voice on the chorus.  The rhythm section of Henson and Estelle just pummel the bottom end of this song, working so tightly with each other it is obvious that this is not their first work together.  With Cutler dropping in subtle keyboard work and just enough programming effects to keep the modern head-bangers interested, this first track is a powerful introduction to what Syndrome Of Fire is all about.

"Sins" starts off with a beautiful strings and keys intro, and is one of two songs that will draw the heaviest Evanescence comparison, especially once Cassie drops her voice into the track.  Starting softly and slowly, "Sins" eventually allows the guitars to come blasting forth, pushing the power of the song up a couple of notches, before again building further, giving more depth and power to the drums and bass, only to back them off at the finish, allowing the song to fade out in much the same way it started.

"Run"  brings the aggression back to the front of the song, mixing in some programming effects on Cassie's vocals at the outset, and really utilizing the angry male backing vocals to full effect.  This is my favorite track on the EP, largely because of the interplay between the clean and harsh vocals, as well as some really solid guitar work and a pulsating rhythm section.  Good, good stuff here.

"The Fall" is the other track most likely to draw Evanescence comparisons, and again that is largely due to the power of Cassie's vocals.  Focused mostly on keys and Cassie's vocals for the majority of the song, with some very subtle programming elements in the background, this uplifting ballad  doesn't even produce a single drum beat until almost 2 minutes into the track, and then goes another 20 seconds or so before the guitars come sweeping in as Cassie's vocals soar ever higher, in contrast to the bottom-end bass line that rumbles forth.  Again, a really powerfully delivered, and beautifully written song on an EP that features seemingly nothing but top-notch efforts.

Delivering a message of hope and faith without bashing the listener over the head or telling them what to think, Syndrome Of Fire gives people plenty to ponder as they read through the lyrics of the four songs here (all lyrics are included).  Other than that, there is nothing...and I mean NOTHING...in the way of liner notes, pictures, thank-you's...heck, I had to go to Facebook and check an old set of messages back and forth between McMahan and myself to find out who was on the record!  The production is spot-on perfect...although I have no clue who produced it....and the mix really allows each instrument and voice to be heard without any other instrument being sacrificed or buried in the mix.

I really wish this had been a full album effort, as it is over all too quickly for me at not even 17 minutes long.  But sometimes, the quality of the material manages to outweigh the lack of quantity, and that is the case here.  Just a really good piece of modern melodic hard rock that is likely to please most members of the Sirius/XM Octane crowd.

Seek it out...you won't likely be disappointed.  Keep checking their website, http://www.syndromeoffire.com/ which has been undergoing some maintenance, for information about a new release coming soon.