CAPTAIN BLACK BEARD "It's A Mouthful" 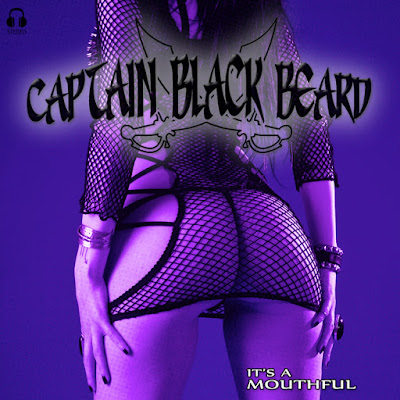 Sweden's Captain Black Beard return for the third time with It's A Mouthful, their newest release on Perris Records.  Oddly, I have not even heard of this band despite my fairly strong connection to the European glam/sleaze/AOR scene and labels, and I had no idea what to expect when I first received this album.

Despite the band's name, there is NOTHING "pirate metal" about this band, with the fishnet...ummm...dress(??) that the cover model is wearing being the closest aspect of this album to anything even remotely nautical.  In spite of the misleading name, Captain Black Beard is actually a pretty decent melodic rock band that has a solid grasp on 80s-inspired hard radio rock.  While not overly original, the band has plenty of hooks musically, a strong lead vocalist, and catchy-enough songs that tend to stick with you for some time after giving them a spin.

The album starts off with two straight up rockers in "Divided Feelings" and "Take Me To The City".  "Divided Feelings" is the album's lead single and is a solid slice of melodic hard rock infused with a dose of pop sensibility.  Solid backing vocals, a nice, catchy rhythm, and an above average guitar solo give the album a solid start, even if the song itself is rather generic in nature.  "Take Me To The City" is slightly more catchy in its chorus and a bit more aggressive in its guitar approach, although there is still a heavy dose of syrup poured over the top of this track as well.  Again, not bad stuff at all and solidly executed, but not jaw-dropping or amazingly original, either.

"She's The One" teases at being a ballad for about ten seconds before becoming a middle-of-the-road rocker that doesn't really go anywhere for me.  "Tearin' Me Apart", on the other hand, has some really nice guitar work, both rhythm and lead, (plus a kick butt cowbell!), and is one of the strongest songs here, with a simple, sing-along chorus.

This is kind of the way the album waxes and wanes for the remainder of the 12 songs here.  A couple of decent songs, a weaker one, and then a good one.  "Far Gone" has a fairly unique rhythm and a bluesy vibe to it, helping it to stand out from a lot of the other tracks here, and the quasi-title track, "Mouthful Of Love" may be the best overall song here, despite the ridiculous title.  It's got a sleazy edge the other songs here don't possess, with a solid, aggressive guitar to lead things in, and quite honestly it reminds me musically of the barroom sleaze that Faster Pussycat did on their first album, although the vocals are far more saccharine than anything Taime has ever employed.  I also really like "South Beach", which is catchy and has a classic 70's rock vibe to it, both musically and in the way the lyrics are put together.  I actually think this is the style the band works and sounds the best with, and I would honestly really like to hear an album full of more classic rock styled songs, and less 80s/early 90s hairspray AOR.

As for the rest of the songs here...they are pretty much miss...or miss badly.  The two tracks that really just don't hit home at all here are "Coast To Coast" and "Falling".  First off, I understand that the trend recently has been to combine elements of country music with rock to try to come up with some across-the-board instantly accessible style that rockers and country fans will all love instantly. And even though that will likely NEVER happen, I do understand the attempt as far as the business side of things go.  But someone should have told Captain Black Beard that the country these bands are incorporating is modern, edgy country, not 70s/80s Eagles inspired country!  Yikes!  "Coast To Coast" sounds like the Eagles' "Take It Easy" on downers with a lap steel guitar thrown in.  As someone who used to run a country radio station, I can tell you that dreck like this would never have garnered airplay!  Yikes!  As for "Falling", the band calls it a "Dave Grohl Tribute", but I'm not sure why.  It doesn't sound like Foo Fighters (or Nirvana, for that matter), the song isn't about him, and I have ZERO idea where the "tribute" tie in is, unless they are referencing Grohl "falling" off stage and getting hurt.  If that's the case, man, that's a STRETCH.  In that case, you could call "Walking The Dog" a tribute to me since I, well, walked the dog this morning...  Anyway, bizarre name aside, its not a particularly memorable song, although it does employ a decent guitar solo from Ek.

The band is solid as performers...Ek is a really good guitar player, to be honest...but they aren't overly original as songwriters.  But, I don't think originality is the goal of the band, as I think they are playing exactly what they want, which is middle-of-the-road polished hard rock, the style which was saturating radio and high school dances by the late 80s/early 90s, making nearly all bands indistinguishable from one another.   Captain Black Beard is the kind of band that the girls I ran with in high school would've LOVED and which I could have actually managed to listen to with little difficulty while I was waiting to bust out my Great White, Metallica, WASP, Ratt, Anthrax, and Tesla albums!  Rock with no metal, lots of hooks and little danger, just the way the chicks liked it!

The production is rather dated sounding, which I'm guessing is intentional, but it in no way makes the record unlistenable.  And, since my copy is a digital advance promo, I have no way to comment on the packaging or the insert for the CD.

All in all, not great, but certainly not horrible.  Its A Mouthful is a decent listen and makes for a great mix-in CD if thrown in with the right selection of 80s rock.  I wouldn't even be surprised if you heard some of your friends say, "Hey, I haven't heard that in a long time!", even though they have never heard it.  That's how familiar, and frankly indistinguishable, the music is on this album.

Rating:  Rock this at 5.5, although I could see myself squeezing a 6 out of it if at least 2, and maybe 3 songs were left off...especially "Coast To Coast".

Back To Reviews Index
Posted by arttieTHE1manparty at 11:20 AM