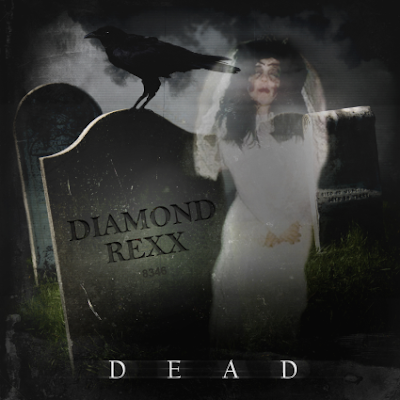 Diamond Rexx has recorded their first new song in nearly 8 years...at least...as they have reunited to play a special show on June 18th in Illinois that will feature the band playing their cult classic album, Land Of The Damned , in it's entirety from front-to-back.  That day will also see the release of this new single, "Dead", which sounds...well, it sounds like Diamond Rexx.  Sure, Nasti's vocals don't have the higher end they did on Land of the Damned, but the guitar hooks are still there, and the energy level is still high as the guys tear through this somewhat modern-sounding take on the band's classic sound.  The track comes our with a chugging guitar riff from SS, and the lower-range snarls of Habits, with a solid, if unspectacular foundation laid by the drums and bass of Cottone and Andre, respectively.  SS rips off a nice solo starting at about the 2:30 mark, leading Nasti back into his angst-fueled rant against people who may be foolish enough to cross him.  The song continues to chug along through another chorus and verse before coming to an abrupt halt a little more than four minutes after it started.  Not revolutionary by any means, but still sleazy, still a bit punkish, and still Diamond Rexx, "Dead" will hopefully be the start of a new project for a band that really snagged me when Land Of The Damned came out nearly 30 years ago!

Back To Reviews Index
Posted by arttieTHE1manparty at 11:24 AM