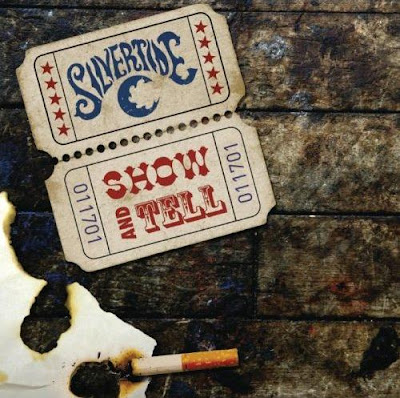 Very few bands hit me as hard...and then disappeared as quickly...as Silvertide.  Back in the 1990s and early 2000s, there was a revivalist movement of the 70s and 80s classic hard rock sound.  Black Crowes are often credited with leading the way when they hit the scene in 1990, although to me that band always had as much in common with the southern rock sound as it did the classic rock of the 70s.  Other bands, such as Jet, and later Airbourne, also really carried the torch for this musical revival, but for my money, the best of the bunch was the "here today, where the heck did they go two weeks later?!" kids of Silvertide.  I say "kids", because the whole band was in their teens and very early twenties when they released their debut EP, American Excess, in 2002, and then this, their only full-length release, Show And Tell, just two years later.  Brass, bold, chock full of attitude, and loudly in your face, Silvertide wore their influences on their sleeve, but put their own stamp on a yesteryear sound that none of them were alive for when the style was fresh and new!  AC/DC, Aerosmith, and 70s-era Styx and Cheap Trick combine with the sleazier, dirtier Hollywood underbelly of bands like Faster Pussycat and Guns N Roses on this killer debut record.  Forget the nu-metal of the band's era, these boys came to throw a party while they were rocking your face off, a fact that was very much evident on Show And Tell.

This album is an absolute must own, as there is just solid rocker after solid rocker after solid rocker on this record, with two nicely executed ballads mixed in for good measure.  From the kicking album opener, "Ain't Coming Home", with its gritty AC/DC three chord rock n stomp, punchy drums, and Lafty's sneering snarl, all the way through the angst-laden closer, "Foxhole J.C.", which was written shortly after the events of 9/11, the band had a chemistry and attitude of acts many times their age and experience.  This attitude and energy and chemistry was obviously apparent to others in the industry, as the band was chosen to open for their heroes, Aerosmith, after only being a band for 6 months, and then later toured with Van Halen and Motley Crue, among others.  Talk about running with fast company right out of the gates.

Four singles were released from this record, with three of them charting Top Twenty on Billboard's Mainstream Rock Chart in 2005 ("Ain't Coming Home" #6, "Blue Jeans" #12, and "Devil's Daughter" #18..."California Rain" didn't chart), but honestly, I think the band/label made a mistake by not pushing the big ballad, "Nothing Stays", which really showcases the band's strong songwriting and their ability to rein in all of their musical aggression and expertly showcase their softer side.  Some of the best lyrics on the album are found in this softer section, as well.  Just a solid song that I think would have charged up the charts for the band.

Two songs, "Mary Jayne" and "To See Where I Hide" were carry-overs from the band's debut EP (which was actually their demo), and I think you can tell the band was not quite as sharp with their songwriting on these two older tracks.  Neither is terrible, but lyrically they are both lacking.  Of the two, I would say "To See Where I Hide" is the best, simply because it has some excellent guitar work...including a Hendrix-esque intro...and some really nice drum work, along with a solid bass line, that would possibly be one of the better tracks on a truly great album had it been stronger lyrically.

Favorite tracks on the record would be "Ain't Coming Home", the catchy, more 80s-feeling "California Rain", the lyrically catchy, "Blue Jeans", the biting "Foxhole J.C.", and both of the ballads, "Heartstrong" and "Nothing Stays".  Nothing here is skip-worthy, however, as this is one of the best overall debuts I have ever encountered in any style of music that I listen to.  It's too bad the band's 2013 reunion didn't result in any new music, and nothing I have seen or heard would lead me to believe a new Silvertide record is even a remote possibility at this time.  The EP is available out there, and I know there were at least five "B-side" tracks recorded for Show And Tell, although I have only managed to find two, both of which are really good, if not great.

Here today and gone just five minutes later, or so it would seem, Silvertide had a world of promise, and they totally delivered on that promise with this dang-near perfect debut effort.  I still feel they could be a force in the hard rock scene today had they managed to survive, but perhaps too much fame and too much success came far too quickly for these young guys, and Show And Tell is the lasting legacy of a band that could've been the beginning, rather than the end, for a killer rock band.

Rating:  Definitely a crankable gem, even after more than a dozen years, Show And Tell is still a 9 in my book, maybe even a 9.5, given my mood.