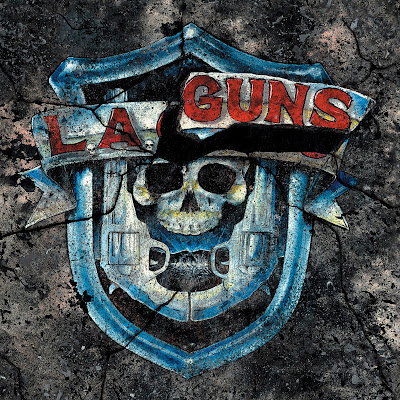 I don't know if there has been a band in the history of rock n roll that has had more line-up changes and members than LA Guns.  Seriously.  To try to connect the dots of who has been in that band is about as twisted and warped as a game of drunken Twister!  But the two key components in all of the great albums the band has released have always been Phil Lewis and Tracii Guns (no disprespect to Steve Riley intended).  Yes, there have been some really good LA Guns records since the split of the duo, but nothing that has touched the quality of the first three records, LA Guns, Cocked & Loaded, and Hollywood Vampires.

In the world of hard rock, there have been a LOT of never-gonna-happen reunions over the years.  David Lee Roth will never play with Van Halen again.  KISS will never reunite.  Guns N Roses will never see Axl and Slash on the same stage again. You know the drill.  And as unlikely as all of those were, each and every one of them happened.  And, as you can see in the line-up for this album, one of the most unlikely reunions has occurred on The Missing Peace, as Tracii Guns has returned to his namesake band to join Phil Lewis on a record for the first time since 2002's Waking The Dead album.

Fifteen years is a long time to go between records, to be sure, but as we all know, there have been several albums in between the commercially-disappointing but musically-interesting Vicious Circle record.  Phil has managed to largely keep the traditional LA Guns sound alive with a mish-mash of band members, releasing a handful of really good records (Hollywood Forever and Tales From The Strip being the best)...and a couple of not-so-good records as well.  This new album definitely slots in with the "really good records" section, as it combines elements of the first three records with the harder, angrier edge that was present on Vicious Circle.  Still sleazy, still punkish, the new album also features an angst, an aggression...even an urgency...that has not been present for so many years.  This is evident from the get-go, as the drums kick in and Guns' sneering riffage comes to life on "It's All The Same To Me", before Grant's second guitar joins in and Lewis' unmistakable rasp claws its way through the opening verse of this sassy rocker.  Beautiful in it's simplicity and catchy as can be, "All The Same..." is instantly identifiable as LA Guns, and has the feel of the Hollywood scene, but it also feels like a rawer, hungrier version of the band than the last time Phil and Tracii worked together.  There's no slick layer of polish on this track (or anywhere on the record, for that matter), just bare bones hard rock the way the band was introduced to me all those years ago.

Lead single and video, "Speed", carries much the same urgent feeling as it charges along at full throttle, guitars churning and burning their way across a breakneck drum and bass line.  Tracii rips into a high speed fret burner before the final gang-shouted chorus kicks in, and Phil sounds exactly has he always has, which is amazing to me considering the mileage that has to have accrued on his vocal chords over the years.

"Sticky Fingers" is one of the real treats on the record, with a huge guitar riff that grabs you right from the onset of the song, a big, sweeping guitar solo section, and a catchy, atypical phrasing style utilized by Lewis on the verse sections of the song, which is my absolute favorite on this new record.  This song is HUGE, an absolute arena anthem, if such things still exist.  An instant classic, in my opinion, this is one track that I feel MUST be included in setlists going forward.

"Christine" and "The Flood's The Fault Of The Rain" are the big ballads of the record, which are pretty much a requirement following the enormity of the song "Ballad Of Jayne" a couple of decades ago.  I think most long-time fans are going to grab hold of "Christine" as their favorite, with the bluesy swagger of the guitars and the nicely layered vocals, but I find myself leaning more toward "The Flood..." which has a definite "House Of The Rising Sun" feel to it.  In fact, its almost uncanny how much the two tracks share a vibe and flow, with the Guns obviously adding a heft and edge to their song that the Animals would not have ever thought to include back in the early 60s.  Lewis' yowl is perfectly suited for this retro-ballad, and the guitar vibe is excellent here.  My second fave off the record, no question, and another song that I would beg the band to include in a live setting.

Speaking of faves, its also impossible to deny the catchiness of "The Devil Made Me Do It", with its big, gang-shouted chorus section of "Lord have mercy!" that feels a lot like something Motley Crue might have done back in the Dr. Feelgood days, but with a much nastier guitar solo and a snarkiness that hasn't been heard on an album from one of the classic Hollywood bands in many, many years.  The title track also worms its way into the best of the best on this effort, with a big, epic feel that isn't quite power ballad, but also never completely breaks into a full-throttle rocker, either.  And I can't discount how much I enjoy the album's closing track, "Gave It All Away", which Phil absolutely floods with emotion, especially as he bleeds pain into the chorus while Tracii and Michael Grant are riffing away in the background.  A truly great way to close this amazing return.

Tracii is in fine form throughout the record, but he is at his flashiest on the uptempo "Don't Bring A Knife To A Gunfight", where he smokes his way through an absolutely scorching solo that is so reminiscent of the material he used to unleash on a regular basis back in the 80s.   For a dirtier sound, check out the solo he rips through on "A Drop Of Bleach", which is an absolutely blazing rocker for much of the track, backing off only slightly on the chorus sections before ramping back up to charge through the verses.  The second guitar provided by Michael Grant really adds depth to the sound here, allowing the riffs to continue to run throughout tracks while Tracii goes off into guitar god territory, and the rhythm section is exceptionally tight here, which is going to go overlooked by many old-school fans who are still geeking out at Phil and Tracii recording together again.

I have to wonder if the title of this record isn't a bit apropos here, as it would seem the thing that was missing from LA Guns, the piece that was needed to get the band back to a level they hadn't really approached in more than 25 years, was the "peace" between Phil and Tracii.  I have no idea about where they are with each other personally; maybe they can't stand each other, even today.  But it is apparent they have at least found a way to co-exist peacefully long enough to put together a record that I dare say will challenge many die-hard fans to question their ranking of the band's catalog.  While it remains to be seen how time will treat this record for me, I'm not so sure I wouldn't slot this in as my second favorite LA Guns record, because it is so good and so complete feeling.  No skippers, no filler, no pointless intros, outros, or interludes, just a snarling collection of sleaze-drenched rockers and a couple of big power ballads fashioned from some really good songwriting and musical execution.   Edgy, sleazy, gritty...and yet still allowing for a bit of fun...The Missing Peace is everything I could have hoped for in an LA Guns reunion album, minus, of course, a full reunion with Steve Riley, Kelly Nickels, and Mick Cripps, which will likely never happen.  But then again...never say never, right?

Rating:  Raw, amped, and dripping with sleaze, crank this to an 8!

Back To Reviews Index
Posted by arttieTHE1manparty at 9:52 PM