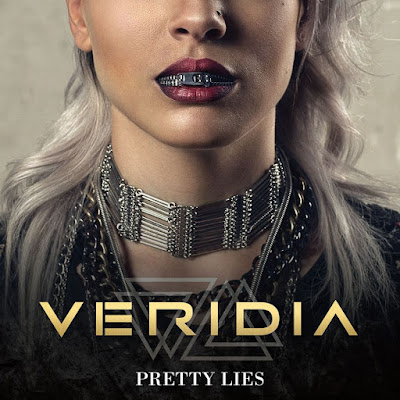 Pretty Lies is the follow-up EP to the band's 2014 debut, and while it picks up pretty much where that first effort left off, it also moves the band forward, if slightly.  Incorporating elements of modern hard rock, electronica, and some orchestral work, Veridia creates a style of hard rock that is both interesting and accessible, powerful and familiar.

The EP starts off with the hardest-hitting, most straight-forward rocker of the material here, in "Crazy In A Good Way".  Strings combine with chugga-chugga guitars right from the start, laying a hard-rocking foundation for Jakoub to build her soaring voice upon.  Smoldering during the verses, dynamic during the choruses, and powerfully emotive during the bridge section, Jakoub's voice is the focal point for finding how Veridia differs from so many other bands out there today, as she seemingly has the ability to do whatever she chooses to do within the constraints of the song.  The  programmed elements of the song are used to enhance, rather than dominate the track, and I would imagine this to be a great way to kick off a concert as Jakoub repeatedly intones that things are going to get "crazy in a good way" on the simple-yet-catchy chorus.

Speaking of simple choruses, the title track, "Pretty Lies", features a chorus that is about as simple as it gets, but it does so in a way that kind of worms into your head and sticks there!  Matty Mullins from Memphis May Fire provides backing vocals here, and his voice blends almost perfectly with Jakoub's on this track, which leans far more heavily on electronic elements than the opener did.  In fact, it is the guitars that are the supporting instrument here, and several of the drum/percussion sounds appear to be electronic as well.  This song did well for the band at radio, so it is hard to argue with it, but I prefer when the band adds a bit more crunch to their sound.  Jakoub sings about the differences between people and the images they often put forward, especially on social media, creating the "pretty lies" that we tell others about who we are.

"At The End Of The World" reminds me a lot of what Skillet has done on their last couple of albums, again mixing in programmed strings with edgy guitars and big drum beats on this mid-tempo rocker.  Actually, I think it would be pretty cool to have had John Cooper from Skillet lend his voice to this track, punching it up just a bit.  There is a pretty cool guitar solo right before the final run through the chorus, which teases the listener with its tastiness, but it is over all too quickly.  Let the guy play!!!  As it is, this is a solid, if unspectacular, song that will serve fans of the band well.

"Say A Prayer", the last new tune on the EP, is the ballad of the effort, and is a strong effort, especially lyrically.  Jakoub sings about the need to pray for those who are hurting, no matter who they are or where they are, and reminding listeners that as bad as things may seem, there is always someone who has it worse and who needs our love and support.  Big, sweeping orchestral elements really bolster the full sound of this track, which again sounds like it is sporting electronic drums and synths while pushing the guitars to the background.  Jakoub's voice is, again, the focal point here, and she gives it her all, easily gliding across the electronic waves of the song.  Her voice and talent are definitely gifts to be reckoned with, and I am anxious to hear what the band comes up with if it chooses to put forth a full-length effort in the near future.

The "Valot Remix" of the title track closes things out, using more electronic effects and less actual musical performance from the band.  The tempo is greatly increased, most noticably on the chorus section, almost to the point that it sounds to me like what happened when, as a child, I would play 33 1/3 rpm records at 45 rpm.  I honestly don't like this remix...at all...but my 10 year old thinks the electronics are pretty cool, so I guess there's a market for it out there.  Matty Mullins is once again featured here, but honestly, he can't be heard at all with the electronic noise going on all over the place.  I just skip this track, personally.

The packaging is ultra-simple, as the CD comes in a cardboard slipcase, with a band photo on the back, along with the track listing, band member names, and some credits.

A couple of years old now, Pretty Lies is still a decent little listen, and fans of Fireflight, Skillet, Icon For Hire, and possibly even Nine Lashes should find something to like here.  Anyone who was already a fan will find nothing about this EP troublesome or off-putting, and the vocals of Jakoub will draw new fans, I'm sure.

Rating:  Extremely short, but executed well, rock this to a 6.5, with a useless remix causing a dent in an EP that clocks in around 17:30 with it, and only 13 or so without.

Back To Reviews Index
Posted by arttieTHE1manparty at 2:41 PM