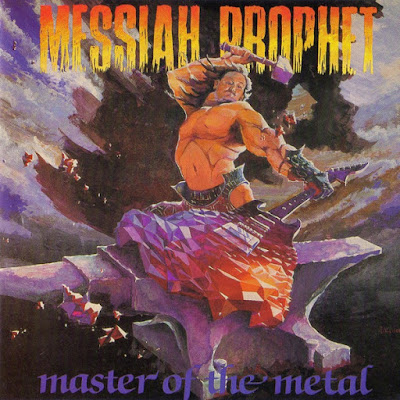 While it had existed as a genre for over a decade, Christian hard rock and metal was going to explode in 1986, due in large part to the massive exposure the genre received from Stryper's massive To Hell With The Devil record.  Suddenly, new bands were popping up, old bands were finally getting recognition and exposure, and new labels were forming to get these bands out to the masses.  Pure Metal Records was one such label, and Messiah Prophet was the first band signed to the label.  Perhaps no band better fit the imagery of a label than Messiah Prophet and their second record (first for Pure Metal), Master Of The Metal.

Previously called Messiah Prophet Band, the five piece act changed three members from their previous album, the solid, but decidedly more hard rock Rock The Flock, dropped the "Band" from their name, turned up the guitars, and created a true Christian (or White) metal masterpiece.  Often wrongly called "Heavy Metal Thunder", most likely due to the popularity of that particular track, Master Of The Metal was a beast of an 80's metal album, complete with dual guitars, a thunderous rhythm section, and a vocalist in Clark who could raise and lower his register seemingly at will.  Interestingly, newcomer Nicarry provides lead vocals on the two ballads of the album, but Clark's wail can be easily recognized in the chorus sections, especially on the massive power ballad, "Battle Cry".

The record starts off in fine fashion with "Hit And Run", a mid-tempo hard rocker that kicks off with rapid fire snare drums and chugging rhythm guitar riffs before an overlay of police sirens enters the mix, adding a sense of urgency...and perhaps a bit of 80's metal cheese...to the track, which finds Clark warning listeners "Don't be a hit and run", referring to finding oneself a victim of Satan without having the protection of Christ's love.  The guitar work here is top notch, and the bass of Shirk is definitely stand-out, as are Thunder's drums.  A great way to kick off an album.

The title track is up next, and again, the mid-tempo track is a near perfect track, with aggressive rhythm guitars, a heavy drum presence, big, gang-shouted chorus sections, and a bass presence that was often overlooked in heavy music of the time.  There is a cool time change following the second verse and chorus section that finds Thunder kicking his way through some interesting drum patterns, before giving way to a flashy lead from Strauss, who also wrote the song.

Nicarry takes his first lead vocal spot on the next track, "For Whom Does The Bell Toll (Ps. 23)".  Introduced by a haunting church bell, "For Whom..." should not be confused with the Metallica track of the same title, as this song is a ballad interpretation of the 23rd Psalm, featuring strong acoustic guitar work and a big, layered chorus vocal, led by Clark, that pronounces "Yea, though I walk/Through the Valley of Death/I will fear no evil".  There are some scriptural modifications to the verses to make them better fit the song structure, but it is clear the intent of the song is to put the well-known inspirational verse to a musical soundtrack the rock/metal kids of the time could relate to.  The chorus, interestingly (intentionally??) leads perfectly into the next track, "Fear No Evil", which finds Clark's high-end power vocals returning to the lead position as the tempo picks back up and the wailing guitars return.  While "For Whom Does The Bell Toll" is an excellent piece of music, it is on "Fear No Evil", with it's shout-along chorus and screaming guitars, that Messiah Prophet really excels.  And nowhere is that more evident than on the featured track of the record, the "hit" of the record, "Heavy Metal Thunder".

Featured prominently at the center of the CD (or at the beginning of the B side of the vinyl), "Heavy Metal Thunder" is five and a half minutes of 80s classic metal bliss.  A big power chord intros the track before Nicarry's rhythm guitars and Thunder's drums join the fray just ahead of Clark's vocals, which take on a nearly-spoken work approach for the first half of each voice, before he cranks up the power, adds a bit of edge, and then elevates the range as he enters the big, layered chorus of "Heavy metal thunder/Heavy metal noise!"  A bridge of "Who are you going to choose?" repeats itself a couple of times before Strauss goes crazy on a screaming guitar solo that put much of the Christian metal scene on notice that this band was for real.  There is also a repeat of the vocal bridge, this time atop just a big...ahem...thundering drum section from Mr. Thunder, himself...before Clark takes a couple of spins through the chorus, and big, twin guitars lead the charge home.  At this point, the greatness of the record and the band is pretty much firmly established and the rest of the record is pure sonic bliss.

"The Friend" follows up, again featuring a catchy, chant along chorus and gritty rhythm guitars that keep the mid-tempo metallic train chugging steadily forward as Thunder's drums and Shirk's bass keep hammering away in lock step.  Nicarry returns to the lead vocal slot on "Battle Cry" which is an excellent quasi-power ballad that is again supported by Clark's powerhouse vocals on the chorus section, before the record closes with one of my two favorite tracks on the album, the epic metallic rocker, "Voice That's Calling" that is every bit as musically perfect as "Heavy Metal Thunder", even if its likely not as accessible to casual metal fans.  Strauss is absolutely spot-on with his solo work throughout this seven minute monster.  For me, the brilliance of the track is the closing vocal stretch that finds Clark emphatically wailing, "Jesus, Jesus, I will have no gods before you" repeatedly as Nicarry riffs away and Strauss tears into another closing solo run as Thunder complements the song with some great tom fills.  Just a powerhouse of an ending to an equally powerful track.

The cover artwork is nearly as noteworthy as the music, and it is a great part of the overall package here.  The CD insert (and the cassette insert, as well) features full lyrics, writing and performance credits, acknowledgements, and booking information.  There are no band photos or member thank yous included.

This is a masterpiece of an album in the Christian metal genre, and a great piece of straight forward 80s metal overall.  Edging a bit towards more commercial, more melodic metal at times, the album struggles only with the limitations of he production at the time.  This is an album that SCREAMS for a true remastering, because if the muddiness could be even semi-cleaned up in a couple of areas, fans of the Christian metal sub-genre, and of 80s metal in general, would clamor for the project.  As it stands, this album has been reissued one time in the early 2000s, but it was not remastered.  In a perfect world, I would love to see an anthology collection of this album, the 1984 independent album, Rock The Flock, and the last song Clark recorded as Messiah Prophet (albeit with a totally different band), "Blinded".

This would be the final true Messiah Prophet album (again, Clark recorded one more song, but with a different band), and the next album to feature the Messiah Prophet name, 1996's Colors, is a completely different animal than this iteration.  Decidedly more commercial hard rock in it's approach, Colors, while not horrible, pales in comparison to Master Of The Metal, and not one member of the band from either Rock The Flock or Master Of The Metal performs on it.  I believe this is an example of the label owning rights to the name and the publishing, so when Clark and Strauss' version of the band ceased to exist, the label (then Refuge Records, who bought out Pure Metal) simply put together a new version of the band in an effort to sell records (that plan failed, by the way.  Colors is pretty much considered garbage by most Christian metal collectors, although I think this is a bit harsh.)

Sadly, Clark lost his battle with Lou Gerhig's Disease (ALS) in very early 2018 at the too young age of 55.

Long out of print, in either the Pure Metal or the limited edition reissue, this CD is still highly sought after and regularly fetches $25-50 prices on eBay.  I have seen copies on Amazon listed for $29.99, but I have a hard time believing these are not bootlegs, as they are listed as "new", which I find hard to believe.

If you can find one for a decent price, you should snag it, because Messiah Prophet's Master Of The Metal is one of the truly great pieces of Christian metal in the important 80s metal scene.

Posted by arttieTHE1manparty at 2:33 PM