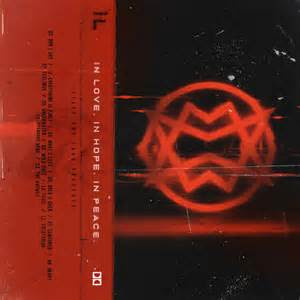 Go ahead.  Try to find another band as nearly impossible to pin down style-wise as Fight The Fade is.  Sure, on the songs they are best known for, such as "Edge Of Desire", "Lanterns (In The Dark)", and "Masks", the band comes across largely as a industrial hard rock/metal band.  And that's a fair assessment if all you have heard are the singles, especially the most recent ones.  And man, those are some GREAT songs.  But if you have never dug deeper into a Fight The Fade record, you have missed a lot of other pieces of who the band is.  I mean, this band is SO electronic at times, there are more bloops, bleeps, whirs, and buzzes than in a Star Wars droid scene!  Sometimes those moments are almost entirely devoid of guitars, while other times the electronic elements are merely the bedrock upon which the rest of the song is built.  And nowhere in their catalog are these elements more prominent than on their newest effort, In Love. In Hope. In Peace.

The album starts off with "Don't Say", and right away fans of Fight The Fade will notice something different is going on here.  Combining heavy electronics usage, a repetitive bass line, and equally repetitive lyrics, "Don't Say" in unlike anything I can recall hearing from the band previously.  I can't say I dislike the track, because I really like the way lead singer and band founder, Zene Smith, approaches the vocals on this piece, but it is definitely not something that I was planning to hear when I popped In Love.In Hope.In Peace. in for the first time.

The same can be said for "Everything Is Fine?".  If "Don't Say" was a bit of an oddball, "Everything Is Fine?" is straight up quirky.  Techno, industrial, electronica...even hints of dubstep...all collide in this song, and pretty much everything here is electronic, from the drums to the synthesizers to the effects used on Smith's vocals.  And when Smith's more metallic scream kicks in towards the end of the track, the heavy guitars aren't there to accompany him, just layers of synthesizers and electronic sounds as his scream echoes away, trailing off into the more spoken-word approach he uses for most of this track.  Not gonna lie, I was starting to get a bit concerned at this point, as this was not the Fight The Fade I was expecting.  Where were the hard hitters like "Lantern" or "Masks"?!  What gives?

Turns out what I was seeking would punch me in the earhole immediately, as the mid-tempo-but-hard-hitting rocker "What's Left", blasts forth on song three.  A track that combines an industrial element to its guitar-driven hard rock, "What's Left" is likely the sound and style that fans of Fight The Fade picked up this album to hear.  For non-fans, if you are familiar with the band Stabbing Westward from the late 90s and early 2000s, that would be a fair sonic comparison, although Zene has far superior vocals, in my opinion.  Already seeing significant airplay on Christian rock stations, I really don't know why "What's Left" isn't getting broader radio play, as it would fit comfortably on nearly any modern rock station, metal station, or on Octane.

"Over And Over" slows things down a tad and inserts a few more electronic elements, but the guitars still carry a heavy, industrial grind throughout the track, and the chorus punishes when it hits full force.  Utilizing some pretty harsh vocals in spots alongside the unmistakable vocal style of Smith.  There are some atmospheric elements here, as well, especially on the bridge section before the final run through the chorus, which really add to the musical depth of the track.  This song was a real sleeper for me, as I feel I used to spin right through this song without realizing just how great it was.  Trust me, I stop to take notice now.

"Cosumed" returns to the heavy electronic influences, and I get a distinct Nine Inch Nails vibe here.  The electronic drums are very rapid fire on this track, and harsh screams rip through the chorus section that is a big part of the NiN comparison for me.  I can envision a moshpit opening up at the front of the stage as this song pulsates with techno rhythms and industrial power, but I can't say that this is a track that I find myself really grabbing onto, as NiN has never been a favorite of mine.  I will say that this is some of the heaviest vocal work I have ever heard from Smith, as he lets loose with some rage-filled screams that stand completely apart from the smoother vocal style he applies to the next track, "Heart", which finds itself in that weird territory between ballad and mid-tempo rocker.  Piano and softer percussion during the verses yield to heavier, more aggressive sounds in the chorus sections on this obvious love song.

"Feelings" has a unique percussion line to it and some blurby keyboards that run throughout this song about self-sacrifice (yes, I said "blurby".  I don't know how else to explain them.)  Definitely one of the weaker musical moments for me, I honestly skip this track the majority of the time.

Skip is NOT something I do with "Underwater", which follows a similar style to the other rockers here, combining atmospheric electronic elements with hard driving guitar lines and Smith's powerhouse vocal style.  The mid-tempo rocker has multiple layers to the vocals, with the main line of the chorus exclaiming, "I keep going underwater", while set slightly in the background, a second vocal line implores, "Don't let me drown".  There is a smoothness to this track that just makes it flow...well...like musical water when I listen to it, but the guitars retain their bite and the percussion is huge throughout.  I find myself hitting repeat on this track quite often.

"Wild Ones" is another up-tempo rocker with a big chorus that just begs the listener to scream along when the band shouts "we are, we are the reckless youth!"  The tempo comes to a screeching halt after the second chorus run, with just Smith and some electronic sounds taking over at the front end of the bridge, slowly building in tempo and intensity until until the chorus hits once again.

The Stabbing Westward comparison I made earlier really hits home on "Devil", which is a fun, quirky rocker that leans heavy on the industrial side, but also incorporates some unique percussion sounds, both electronic and human, with some funky bass work thrown into the mix as the instrument doing the heavy lifting during a vocal bridge leading to the final chorus.  And that bridge section...if you don't hear a bit of Kid Rock's "Cowboy" in the way it is structured, we may not be listening to the same song.  Like I said, this is a fun rocker that is unlike anything else on this record.  Check it out below.

"Everything" sounds like it has about three clocks all running in the background, and all are ticking and tocking in slightly different time, which is an odd thing to hear.  At just under a minute, this little interlude leads directly into the ballad, "Standing Here".  An electric current runs beneath the keys that intro the song, drawing up to the guitars and a really big drum sound that would push the track into "power ballad" territory were this 1989.  Make no mistake, this is a modern rocker, but the song's structure and style are definitely a nod to that lighter-in-the-air sound, whether intentional or not.  I dig it...a lot...and I have to think the song goes over well in the live setting.

The album closes on an excellent note with "The Answer", which is definitely one of my top two or three songs on the album.  Hard-hitting and aggressive, "The Answer" is a full-force industrial rock attack from start to...well, almost finish, as there is an echoing keyboard that exits the song and the album.  Smith's vocals are again accompanied by some harsher, lower-register screams that in at least one place sound a lot like Ryan Clark from Demon Hunter.  A nearly perfect way to bring a really good album to a close.

While it does have its quirky moments and expands upon the band's previous sounds, In Love. In Hope. In Peace. is a treat from start to finish and will hopefully draw more attention to a band that deserves to be noticed.  There truly aren't many, if any, bands in the Christian arena that sound like Fight The Fade, and few in the secular world that sound as good as this Oklahoma-based act.  I would strongly encourage you to pick up the album and support the band by shopping directly from their website store, located HERE.

Rating:  Somewhat hard to pin down, especially at the outset, but In Love.In Hope.In Peace cranks its way through to a 7.5 rating!