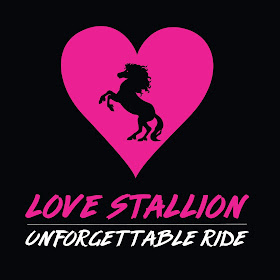 I know what some of you are thinking.  I get it.  I did the same thing.  I saw the band's name, which caused me to think of Wyld Stallyns from Bill & Ted's Excellent Adventure...and then I saw the album's title, Unforgettable Ride, and my mind drifted to Steel Panther.  Just put all of that to an end right now.  This group from Denver is a REAL band, and the tongue-in-cheek humor of the album title is as close to the potty-mouthed juvenile humor as the band gets.  And while the style and sound of the band is straight from the glam and arena sounds of the late 70s and 80s, Love Stallion is not a tribute band or a cover act.  With their debut album, Love Stallion is out to show that their belief in, and dedication to, their craft is the real thing.  All they are asking for is a chance to convince you.

"Slow Release" kicks things off with a riff that reminds me of Deep Purple's "Woman From Tokyo", but quickly slides into a more glam-sounding mid-tempo rocker.  Aaron Hart's vocals are in the upper tenor range here, and despite my fears that he might try to slide up into a Darkness-styled falsetto, Hart maintains a strong, unwavering grip on his performance on the track.  Some nice backing vocals really support the sound here, and a solid, straight-forward rhythm section serves the track well.  McLemore lays a nice, simple guitar solo into the mix here, not coming off as overly flashy and sticking with the style and spirit of the song.

"Ignite The Night" is up next, and what retro-styled album would be complete without the cowbell intro to at least one track?  "Ignite The Night" is that song for Love Stallion.  Also featuring some cool bass work, "Ignite The Night" is another example of a 70s-inspired glam rock track given just enough of a modern update to keep it from sounding dated.  Once again, strong backing vocals are utilized on this track, and McLemore breaks free just a bit more on his solo here, but still doesn't give the impression he is trying to steal the spotlight here, rather feeding into the overall approach of the song itself.

"Big Rock Radio" is the song that got Love Stallion started, according to the band's press kit.  Apparently the song was written outside of a concert hall clear back in 2013, and it finally sees the light of day here.  Reminding me a bit of The Darkness, but with FAR MORE tolerable vocals, "Big Rock Radio" is a smooth listen, with a catchy guitar line and a straight-ahead rock groove, that feels very much like the type of glam rock that was transitioning the 70s into the 80s.  There's a bit of a fret run in the solo here, which is longer and more involved than most of the solos on the album, and while it's not overly flashy, it is definitely a fun listen, overall, and is a song that I am guessing gets a nice response from fans who are familiar with the band.

"Lazy Summer Dream" is pretty laid back and it's at this point that the album kind of bogs down a bit.  The songs aren't bad, but the tempos are all very similar, ranging from balladry to slower-pace mid-tempo rock.  "Hide Me Away" doesn't move a whole lot more than "Lazy Summer Dream" does, nor does "Tinker Toys", although both are strong retro-styled radio rock tracks that lean heavily on a more melodic approach, with not a whole lot of edge or bite to them, overall.  "Valentine" is also pretty slow, and really the album needs a kick in the pants by this time, just to shake things up.  Fortunately, both "High Time" and "Trans Am" pack more punch than just about anything else on this record.  "High Time" has some fantastic guitar work, which I really wish we had heard more of on this record, and "Trans Am" ends things with a bang, offering up solid reason to believe that only good things lie ahead for this band.

The production is a bit thick sounding in places...not muddy, but lacking much in the way of sparkle or polish.  I'm okay with it, especially after several listens, and producer Steve Avedis certainly has a pedigree in the industry, so I can only surmise that the sound here is intentional and not the result of financial limitations or something like that.  I guess I was just expecting the overall sound to be a bit brighter.  In the end, it matters very little, because the songwriting here is strong enough, and the musicianship is accomplished enough that Unforgettable Ride is still an enjoyable debut from a band that really sneaked up on me despite the fact that I live in the same relative geographical region as the band and am fairly in-tune with the regional music scene.  I hope to get the chance to catch the band live at some point, as I have heard their shows are definitely a party you want to be involved in.

While an adjustment to the tracking order might have made for a more balanced listen, Unforgettable Ride is an above average debut, especially when you consider the style the band is working in.  Not an outright 70s classic rock guitar record, nor a mid-to-late-80s hair metal affair, Unforgettable Ride carves out a niche in the smoother, more laid back guitar rock of the 1979-1983 range that was so much a part of my youth.  Hart has an obvious passion and talent for this type of music, as it is extremely well-written and his vocals are spot-on for the style.  Similarly, McLemore has a knack for incorporating just enough guitar into these songs to keep them from drifting away, while also not giving in to the temptation to drop multiple masturbatory solos into songs that are not designed for excessive whammy-bar wankery.

Rating:  Not a perfect album, but still good rocking fun.  Give this a 6.5!