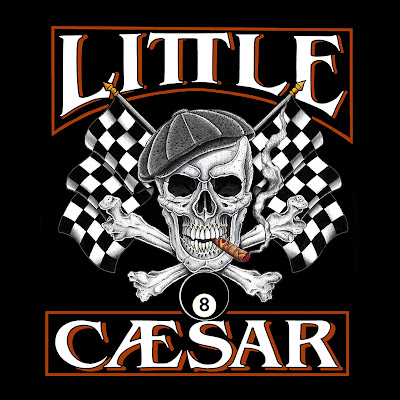 Little Caesar is a band that simply refuses to die.  And I mean that in the most respectful way, honestly.  But when you are a band that literally EVERYONE in the industry thought was going to be the next big thing...and then you get utterly wiped off the face of the musical world (through no fault of your own), it takes something special to carry on.  And that is exactly what happened with this band, once a sure shot hard rock act on Geffen Records, who probably should have disappeared after their label was sold, their label management quit, their musical inventory was lost (as in their records disappeared on their way to stores!), and promotion for the band and their debut album was shut down...all in about a month's time!

But perseverance is an interesting quality; some people have it, some don't.  Ron Young, Loren Molinare, and Tom Morriss, three of the founding members of the band, certainly have it, as they have soldiered on throughout the years, continuing to release their brand of soulful hard rock that belies their outwardly gruff biker looks.  With recent additions of Pharoah Barrett (Four Horsemen) on bass, and Mark Tremalgia (Bang Tango) on guitars, the band has put together their most solid effort since that ill-fated debut album from 1990.

The album opens in fine fashion with "21 Again", a three-chord rocker that would make AC/DC proud with its foot-stomping rhythm and straight-forward guitars.  Young comes in on vocals sounding like the illegitimate child of Lemmy and Aretha Franklin...gravelly, coarse, and harsh, yet still soulfully smooth at the same time.  A nice, bluesy rock guitar solo is thrown into the mix as well, and Eight is off and running!

Twenty-one continues to be a theme on the next song, but in a bit of a different way.  What a lot of readers don't know about me is that I am a dyed-in-the-wool Merle Haggard fan, so when I saw that the band had the balls to try to cover one of the Hag's tried-and-true classics, I immediately sat up and took notice.  While I am not going to say that it will supplant the original's place in my heart, Little Caesar's raucous send-up of "Mama Tried" is pure rockabilly bar band bliss, with Young's gravelly-yet-soulful vocals giving a new boost to Haggard's words, and you can't help but believe the man when he intones "I turned 21 in prison doing life without parole...".  Good, good stuff from a band that is no stranger to treating listeners to new interpretations of classic songs (search up their cover of  "Chain Of Fools" from the debut album for more proof).  Once again, some excellent string bending follows on the solo, then the final verse is left to just Young and the rhythm section of Barrett and Morris to handle, before the band comes blistering back in on the final two runs through the chorus.    Merle is likely smiling somewhere right now...

"Vegas" is similar to "21 Again", as it is a dirty, three-chord rocker with a catchy rhythm, very similar to a lot of the things the band did on their debut.  "Crushed Velvet", on the other hand, is a much more soulful, Motown R&B-styled number, reminding me quite a bit of "Mustang Sally" with its repetitive groove, and Young's vocals taking on a bit more of a ZZ Top, bluesy sound.  A catchy slide guitar solo is thrown in for good measure, rounding out one of the top three or four moments on the record for me.

Speaking of top three or four moments, the 70s Deep Purple inspiration runs deep on the next track, "Good Times", with a cool "Smoke On The Water"-styled intro that runs throughout the course of the record, and the guitar work on this track is top notch, from the rhythm work to the solo and every little drop-in throughout the song.  Not highly flashy, not blazingly fast, but definitely gritty and soulful and perfectly developed for the style of this mid-tempo classic rocker.  I'll go on record right now as saying I would LOVE for the band to serve up an entire record of material such as this track, even throwing in a couple of Deep Purple covers for good measure if they felt up to it.  Loving this.

The sparse "Time Enough For That" slows things down quite a bit.  I don't really care for the first verse's layout, with just Young's vocals and a guitar whose tone reminds me of so many of those mid-90s alt rock, plaintive songs, but the track recovers to a good degree by the time the chorus hits and spends the rest of its time in more blues-based hard rock territory.  I wish the band could go back and rework that first section, however, as it does a lot of damage to an otherwise pretty cool song...at least for me.

"Straight Shooter" quickly rights the ship and ups the tempo with this bass and rhythm guitar heavy rocker that would probably best be categorized as true biker rock.  Perfectly suited for Young's vocal range, "Straight Shooter" is pretty much just straight ahead hard rock that slows itself down only slightly for yet another really, really good guitar solo.  I'm not sure who is playing which solos on this record, as my preview copy doesn't have that kind of information, but the interjection of Tremalgia, who has a history of working with blues bands when he wasn't with Bang Tango, seems to have upped the guitar game from the last time I checked in with Little Caesar.

"Another Fine Mess" is a nice barroom shuffle with some catchy piano and guitar work, but not an overly memorable track in the grand scheme of the record.  "Morning" is a solid blues-drenched ballad that I think is the better of the two slow numbers on the record ("Time Enough..." being the other).  I really like Young's vocal approach here, and once again, the guitar work here is excellent, with plenty of soulful and emotional energy channeled through the solo here, which is my favorite on the record.  In fact, remember when I said I would take an entire Little Caesar record of songs like "Good Times"?  I'd take an album of this type of blues rock as well!

The album wraps with "That's Alright", which is an okay song, but not my favorite by any stretch.  It reminds me a lot of a Foo Fighters song, to be honest, which again, is okay, but not really what I'm looking for from Little Caesar.  The end of the song has kind of a cool jam session feel to it, and again, the song isn't terrible, just not necessarily memorable for me.  Definitely not in the same league as a track like "Morning" or "Good Times", or even "Mama Tried".

The production is a plus here, as it is easy to pick out the individual instruments at work, with special attention seemingly given to the bass, which is prominent (not dominant) in the mix, and the separation of the guitars.  Again, Young is in excellent form vocally, and the drums have good sound quality and don't sound boxy or too big for the style of music performed here.  Again, I don't have any mixing or mastering credits in front of me, but the album was produced by Bruce Witkin, who has worked with Little Caesar before, and he seems to have a real feel for the sound the band is trying to present here.  Nice job, overall.

Due out in March of 2018 on Golden Robot Records, Eight is a very good, hard blues rock record from a band that would likely be just as comfortable on a stage in a honky tonk dive as it would in front of 2500 people in a theater or arena.  In fact, Little Caesar may be more comfortable in that honky tonk, because those people are the type to likely get the gritty, grimy, blue-collared, soulful rock-n-blues the band is delivering on an album like Eight.  If that sounds like your kind of music, then I encourage you to seek this album out, as it is definitely a fun listen, and the best I have heard from Little Caesar in at least 25 years.

Rating:  Foot stomping, fist pumping, bar brawling rock-n-blues for sure!  Crank it to 7.5!

Back To Reviews Index
Posted by arttieTHE1manparty at 1:44 PM