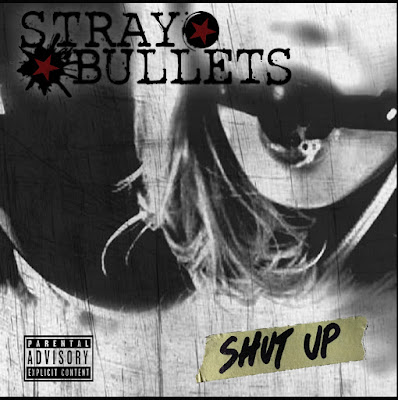 Stray Bullets is a new band hailing from Italy, which has seen its fair share of hard rock/glam metal bands pop up in the past decade or so.  Judging from the cover art, the band is aiming for the sleaze crowd, but overall the sound of the album is not overly sleazy at all.  In fact, Stray Bullets reminds me very much of a modern incarnation of the Scorpions in a lot of ways.

The most obvious comparison between Stray Bullets and the Scorpions is going to be the similarities in vocalists.  Throughout most of the record, Alex is a dead-ringer for Klaus Meine.  I mean, I wouldn't be surprised at all if Ale was found by the band fronting a Scorpions cover act at some point...he really sounds that similar.  Of course, we also have the twin guitar attack in Stray Bullets, and both players do themselves proud here, as the guitars are truly one of the high point on Shut Up.  Heck, as far as the musicianship goes, there is virtually nothing to complain about here, honestly, as Zen is a really good drummer on the record, and Duff more than holds his own on the bass, which I am happy to report can be heard throughout the mix here, which is not always the case, especially with European bands playing this obviously 80s-inspired style of hard rock and metal.

The album starts off solidly enough with one of the sleaziest riffs on the record to intro "Lost Soul Town."  This track, like most of the others here, actually appeared on the band's self-released album from 2010, but due to pretty much a complete band tear-down and re-build, the songs have been rewritten and rearranged for this album.  While I haven't heard the original, I have to say I was fairly impressed with the sound of this first track, as the band has a definite love for and understanding of 80s hard rock and hair metal, and they do a really, really good job of executing on this track which reminds me quite a bit of Sledgehammer Ledge when it first kicks in.  The guitars are blistering, the drums are big and hard-hitting, the churning tempo is excellent, and Alex's Scorps-yowl is a great fit for this hard-charging fist pumper!  Yeah, I'm stoked right from the jump on this record.

"Get On You" keeps the tempo in high gear, but I find myself not liking the vocals on this song nearly as much as I did on "Lost Soul Town".  Alex takes an angrier tone here, adding a bit more snarl to his vocals, and for me, it just doesn't work.  The chorus is also just some angry gang-shouting of "Get on you! Get on you!", which does nothing for me.  It's too bad, really, because this could have been a second really good song, as the guitar solo is really good, and the bass work here is awesome!  I love what Duff does on this song.  But overall, the vocals do quite a bit of damage, and I have to admit that after three or four times through the album, I pretty much just skipped this track.

Track three, "Hurts", corrects things for a moment and is a kick butt song, with a blistering solo, some excellent drum work (complete with cowbell!), and Alex back to singing rather than snarling.  A very "big" sounding song, "Hurts" sounds to me like the kind of song that has the crowd very much in the palm of the band's hands in a live setting.  "Candy" follows up with a very late-80s Scorpions sounding track, especially in the chorus which comes off like the band may have been listening to a log of Savage Amusement in the recording and rehearsal studios.  Don't get me wrong, I really like "Candy", but there is some pretty blatant Scorps-worship going on here.  Whether or not that is a good thing is entirely up to the listener, I guess.

The requisite ballad is up next, and "One Way" is decent, I suppose, but nothing overly memorable.  The opening guitar lick reminds me of Poison or, more accurately Warrant.   Heck, the whole song sounds a lot like something Warrant might do...similar to a "Sometimes She Cries" type of ballad...if, of course, Klaus Meine sang for Warrant.

Angry Alex returns on "Put Up Shut Up", which apparently makes the backing singers mad, also, and almost immediately my ears force my finger to hit the skip button.  I just can't get into the few songs where Alex resorts to this angry, snarling type of singing, as it just changes the mood and attitude of the songs and makes them seem phony, as the guitars aren't angry-sounding at all, so everything seems disjointed, at least to me.

"Sex Pot" may be one of the stupidest sounding songs I have come across in years.  The music is really good, with a great guitar solo, some nice galloping drum work, a hard-charging rhythm and tempo...all good.  But the lyrics...they're just...DUMB!  Apparently the song is about a hooker these guys are infatuated with, or something, I don't know, but in the spots where I can understand Alex, I basically wish I couldn't.  "You boys can keep your virgin chicks..."  Really?  REALLY?  THAT'S what you can come up with?  Somewhere in there we hear about her platinum wig, her panties, her long legs...maybe her high heels...I don't know.  The point is, this is an example of a time when a decent musical track is ruined by bad lyrics.

"Be Your Man" returns the band a bit back to their Scorps-worship sound, and even if it isn't the best track on the record, it restores some of my belief in the band and the album.  One thing I will say about this track, "Be Your Man" is the only song on Shut Up that really has a tempo shift in the middle of the song...and it's one of the best three or four songs on the record because of it.  The speed increase when the solo kicks in is a very welcome change in approach, and the fact that the rest of the song retains this new, amped up tempo for the rest of the track really serves it well.

"Rain", "Black Out" (no, NOT a Scorpions cover), and "Crash" close out the record, all in uptempo fashion.  "Black Out" is my favorite song on the record, and I think it is a really fun, very nicely constructed song, with Alex in great vocal form, a shout along chorus, a killer guitar solo, and just all sorts of catchiness rolled up into one song.  It may be one of the best songs I have heard so far in 2018, to be honest.  I  love it and hope it is released as a single so others can hear it, although it will have to be edited for an f*bomb or two!  "Crash" is a rather high-speed affair that is the most "metal" of the songs on the record, although it suffers from some fairly indecipherable lyrics about hard drinking, hard partying, and then drunk driving...I think.  The song is a nice vehicle for more high speed guitar antics, which is a great thing on this record, and "Crash" closes things out decently, although there is a slowed-down section in the middle, when the song's protagonist is arrested, that I think is supposed to be dramatic, but it doesn't really work that well, at least for me.  If Stray Bullets had just stuck with the speed demon approach, this track would've been an absolute killer at the end of the album.

Generally speaking, I like most of the record, but I do have a few complaints.  First, the vocals get pretty annoying at those times when Angry Alex surfaces.  As I mentioned previously, the guy reminds me a lot...of Klaus Meine from the Scorpions, which works great, no problems; you sound like who you sound like.  But when he obviously alters his approach and changes into Angry Alex, I just instantly want to shut him off.  One smaller complaint that is related would be that Alex needs to work on his enunciation.  At least I can understand Klaus about 80% of the time, whereas with Alex, that percentage is at less than half.  And, when I can understand him problem number two pops up: the lyrics.  Throughout the record, several of the lyrics are pretty cliched, cheesy, and I'd a few go so far as to be just plain lame, overall.   The choruses are generally not much better, as they are usually just gang-shouted repetitions of the title of the song (or some derivative of it), with very little imagination or uniqueness to them.  I get that English isn't their first language, but come on, get a dictionary, as I think this is one area that could really hold back a promising band.

The other thing I might suggest is a single ballad to replace at least two of those faux-angry songs I mentioned earlier.  It would help break up the similarly-paced songs from tracks 6 through the end of the record, and would have the added benefit of wiping out a couple of songs I really don't care for.

Oh. and do something about the ridiculous cover art, for crying out loud...

One thing that you cannot find fault with throughout this record is the guitar playing.  These guys deliver time after time throughout the entirety of Shut Up, with HUGE hooks, soulful melodies, finger-flying speed, and all sorts of six string heroics.  In fact, if I was to come away from Shut Up with one big takeaway it would be that the guitarists will be what saves this band and drives it forward if it goes anywhere.  They really are that good, in my opinion.

Is this a bad album?  No, not at all.  In fact, there are several things to enjoy on Shut Up, and multiple songs that I find myself really liking, or absolutely loving in the case of "Black Out".  I'm just not sure how far this band can or will go without sharpening up their lyrical skills, cleaning up their vocals, and fine-tuning their songwriting so that 90% of the songs aren't basically the same tempo and rhythm patterns.

Rating:  I wanted to crank it, but I just couldn't quite do it.  Shut Up is Rockable, for sure, but in need of some work to elevate to crank-worthy status.  I give Shut Up a solid 6.5, due in large part to the excellent guitar work here and the highly notable "Black Out".