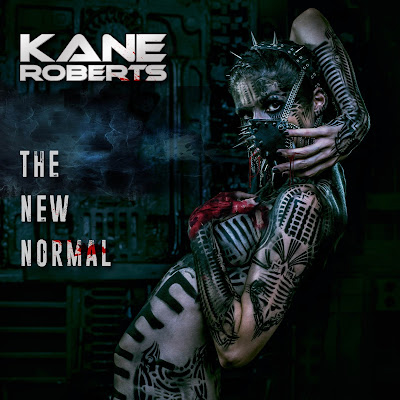 
I'm going to go ahead and get this out of the way.  If you are looking for Saints And Sinners Pt. 2, just stop right now, go grab that disc, pop it in, and enjoy the greatness that a lot of people have overlooked or never bothered to listen to.  Saints And Sinners is a truly excellent album of some of the best melodic hard rock to come out of the early 90s, and is an absolute must-own record.  But, The New Normal?  It ain't Saints And Sinners Pt. 2...but it is pretty darn good in its own right, but in different ways.

The album kicks off in a big way with "King Of The World", and right away, it should be obvious this is a darker, edgier, and more modern Kane Roberts.  Sure, a melodic guitar line runs under Roberts' vocals right from the start, accompanied by some keys, but there are also much heavier drums, especially on the chorus, as well as far more aggressive guitars in the same place, along with some electronic elements threaded throughout the track.  By the way, those choruses are enhanced even further by the backing vocals of one Mr. Kip Winger, who actually makes appearances five of the tracks on this record.  Roberts is in great form vocally, and his guitar skills have never been in question (at least by anyone who has ever bothered to listen to his solo stuff or his work with Alice Cooper), but he has darkened his tone lyrically.  Instead of musing "Does anybody really fall in love anymore", Roberts now snarls, "This is my coronation, Thank you for the degradation/And all I need is the one and only, Broke-down, loneliest girl/Then I'll be, Thankless and free, You're all gonna see/The King Of The World!"  The song has a symphonic quality to the way it is constructed, especially in those chorus sections, with the sharp, punchy drums and stop-start dynamics on the guitars as they crash out of the chorus.  Speaking of guitars, Alice Cooper's current axe-slinger, Nita Strauss, makes a guest appearance on this track as well, handling sections of the lead guitars throughout much of the song.  There is an odd vocal interlude before the richly dark guitar solo that screams to life at about 2:40 in the track, just as Roberts painfully howls, "You never fade away!"  Definitely good stuff, to be sure, but not what people are likely thinking of when they think of Kane Roberts.

Of course, the track that is going to make or break the album for many people is going to be the seriously metallic "Beginning Of The End".  Running the gamut from melodic hard rock to...death metal!...this track is a seriously intense musical journey.  Starting off with some edgy, chugging guitar riffing, the vocals are led in by the one and only Alice Cooper for verse one, with Roberts not joining in until the pre-chorus.  Alice keeps the microphone for the first half of verse two, as well, with Kane taking over from there, only to be joined by some soaring female vocals...and some harsh, brutal death metal growls...courtesy of Arch Enemy's Alissa White-Gluz.  Oh!  And did I mention Kip Winger drops by to help on the bass and chorus vocals?!  Some fierce guitars cut a screaming swath through the middle of the track, before Alice snarls "Go find a war!", and the song cuts out with a false ending, with Kane blazing another quick outro solo, just for good measure.  If that isn't enough, Babymetal drummer, Aoyama Hideki, lays into some seriously heavy percussion on this track., with lightning fast fills and a huge double-kick presence.  There was so much going on with just this track, I was nearly exhausted!  Repeated listens ensued after that first listen, and with every listen, I appreciate the overall complexity of the song more and more.  Plus...it has Alice Cooper, so there's that!

And then, for as aggressive as "Beginning Of The End" is, "Who We Are" is equally as laid back, melodic, and experimental.  In many ways, this track is a pop as anything Roberts has put out, to the best of my knowledge, but it works.  Featuring the crystal clear vocals of Katt Franich, whom I have never heard of, this track is the complete counter to "Beginning Of The End", quieter and more contemplative.  A rich acoustic guitar intros the track and runs throughout, joined by some drums and percussion, as Roberts' vocals enter the song and handle the first two verses and chorus sections, before Franich drops in for a vocal bridge section, before Roberts re-enters to take the song out, with the dark closing lines, "I feel like a dead man walking, Maybe its the drugs talking, Should we burn it all away...?"

"Forever Out Of Place" is an excellent follow-up to "Who We Are", retaining a lot of that acoustic-meets modern flair, with an acoustic flamenco guitar kicking the track off, with some looped drums and effects accompanying them on this mid-tempo track.  The chorus plugs in and rocks out just a bit more than the verses, but this track is about the closest The New Normal ever comes to Saints And Sinners, and melodic rock fans should gobble this track up in one swallow, from the big, melodic hook to the way Kip Winger injects his soulful vocals in the background and even on his own for a couple of lines of the chorus the last time through.

"Leave This World Behind" breaks the lull of the previous two tracks, ramping up the power and the speed in a big way, at least as far as the chorus sections go, with huge drums and crunchy guitars.  The verse sections are still rather sparse, with some odd electronic elements warbling across the underside of these sections, but when the chorus hits, it is full steam ahead, with massive use of double-kick drums, big, crunchy guitars, and powerful keyboard fills, leading into a meaty solo run from Roberts coming out of the second chorus section.  The juxtaposition between the softer verses and the much heavier chorus sections is musical ear candy to me, and the brief piano section that drops in for a visit exiting the massive guitar solo, just teases the listener for a moment before another huge, metallic run through the chorus...and then coming to an abrupt, face-into-a-wall stop.  I love it!

A lot of old-school fans are going to be particularly interested in the penultimate track here, as "Above & Beyond" reunites the musicians from Alice Cooper's Raise Your Fist And Yell album, as Kane's vocals and guitars are accompanied by Kip Winger on backing vocals and bass, Paul Taylor (referenced as Paul Horowitz on the Cooper record) on keys, and Ken Mary on drums.  Definitely one of the top two or three tracks on the record...maybe, just maybe the best one of the bunch...there are so many things to like here, from the dark sounds of the opening verse, to the big, arena anthem sound of the chorus, which has a very Winger feel to it, but with some distinctly modern elements and production qualities!  The vocals here are so perfectly matched between Kane and Kip, I really wish the pair...heck, this entire line-up...would get some studio time set aside and record an entire album together!  Heck, even bring Alice in for a guest spot or three!  It would be every bit as awesome as this song is!

The guest appearances, guest co-writes (including Brent Smith from Shinedown and Lizzy Hale from Halestorm, among others), and the all over the place styles that are used on this record make it one of the most interesting hard rock albums I have heard in a long, long time.  There is no moment of absolute settling into a comfort zone here, because just when you think you know what Roberts and friends are going to do next, they zig when you were preparing to zag, and either punch you in the jaw with a crushing metallic slab of rock, such as on "Beginning Of The End" or the quasi-creepy, electronically-imbued album closer, "Wrong" (featuring an uncredited lead vocal turn from Kip Winger), or they shut the power completely off to the guitars (but leave them on for the electronic drums) and plumb the dark depths of Roberts' soul on tracks like the Hale co-write, "The Lion's Share", or the previously mentioned "Who We Are".

If this is truly the "new normal" for Kane Roberts, count me in!  Definitely not a follow up to Saints & Sinners as far as cohesiveness and melodic flow, but there are some absolutely stunning musical moments here, and I'm curious what the guy has up his sleeve for the future.  Hopefully we won't have to wait several years for another solo Kane Roberts record, because The New Normal shows the guy has a lot to get off his chest and out into the open, musically.

Back To Reviews Index
Posted by arttieTHE1manparty at 11:58 AM