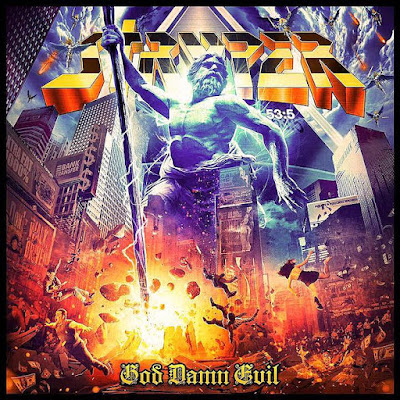 Yikes!!!  Suddenly, Stryper is swearing at me!  And apparently, they are playing death/thrash metal now, also...at least that's what we are led to believe if we take the entire new album, God Damn Evil, only at face value.  I mean, just check out the chorus on the lead single, "Take It To The Cross" (the first one hits at 2:13)...

There are so many things wrong with this track that I almost gave up on the record after one track!  Okay, not really, as I genuinely love Stryper and have since they first hit the scene with The Yellow And Black Attack clear back in 1984.  I've followed them forever, it seems.  And they have been seriously kicking Satan's head around for the past five or six years since they were revitalized on Frontiers Records with the brilliant melodic metal on No More Hell To Pay and Fallen (and, technically, on Second Coming, which is also on Frontiers).  But this?  Like I said, so many things wrong with this song.  For starters, that 1:19 intro is NOT just on the video; it's also on the record and it is super annoying.  I thought my CD was damaged the first time I popped it in because it took SO LONG to start playing!  Now, once it kicked in, its's pretty decent in the opening musical section, with some aggressive rhythm guitars and kick drums, and a style that is a bit heavier than is typical for the band, but still pretty much recent Stryper, with Michael's melodic voice still very much present.  But then the chorus kicks in and...and...heck, I don't know!  Look, I love thrash metal, which I have made very evident throughout this site and the reviews I've done, but this is just a big swing and a miss from a normally very heavy hitter in the melodic metal line-up (I also love baseball, in case you hadn't figured that out)!  Christian metal fans will likely note that Michael Sweet sounds exceedingly close to Dale Thompson of Bride with his shrieks in the chorus section. (In a bit of historical irony, Thompson was reportedly asked to front a Michael Sweet-less Stryper a couple of decades ago, but that's a story for another time.)  And then, Matt Bachand from the melodic death metal band, Shadowsfall, comes growling out of my speakers at me for no apparent reason.  I'll be honest, this album features one truly unique distinction for me in that it is now, officially, the only album I can think of that has an opening song (not intro, but actual song) that I skip right off the bat.  I just can't do it.  I actually ended up ripping and re-burning the album without "Take It To The Cross" for my car.

It's funny to me that the next track is called "Sorry", because it seems like Stryper is apologizing for the previous track!  And, from this point on, the record is pretty much what you would expect from Stryper:  big, catchy hooks, strong lead vocals, soaring, perfectly harmonized backing vocals, and thunderous drums.  In fact, some of the tracks on this record are among the best the reformed band has released since they came back with Reborn clear back in 2005.  Check out the video for "Sorry" below, and tell me this isn't exactly what you'd expect from Stryper these days...

Michael Sweet is in absolutely stellar form on this record, delivering powerhouse vocal after powerhouse vocal on pretty much every track here.  Heck, he even gives it his all on "Take It To The Cross", for what it's worth.  But to me, nowhere does he sound better than on the previously mentioned "Sorry", and on the big, mid-tempo rocker "The Valley", which features a chorus of a slightly paraphrased 23rd Psalm, "Yea though I walk through The Valley of the Shadow of Death, I Fear No Evil, No Evil...".  Excellent stuff here and a song that I can only hope ends up in the playlists of the band for years to come, as I think it is a truly classic Stryper song!

Three other songs are sure to become instant classics, as well, with the big, melodic sing-along of "Sorry", the barn-burning, near-speed metal of album closer, "The Devil Doesn't Live Here", and the most controversial track the band has recorded since "To Hell With The Devil".  Of course, I am talking about the huge, arena anthem that is the title track, "God Damn Evil", which is apparently so bad that Wal-Mart has refused to carry it.  Okay, whatever.  Michael Sweet laughs it off and explains (as if it needed explained) that it is actually a prayer, of sorts, asking God to damn the evil of this world to hell.  Just like people claimed Stryper was asking you to go to hell with the devil in 1986, they are, at least according to Wal-Mart, pronouncing themselves to be God damn evil musicians.  (For the record, I believe if this was what they were going for, the grammatically correct way to say it would have been to use the past tense form of the verb "damn", which would then be God damned evil...no blasphemy intended here in my grammar lesson, as I am both a God-fearing Christian and a teacher.)  All three these tracks feature everything that has made Stryper so great for 30+ years, and definitely everything that has them laying waste to pretty much every other 80s-era glam/hair/metal band that is still pulling on the spandex and strapping on their guitars.  And kudos to the band for bringing the yellow and black back, but in a more modern way, as the imagery is the stuff of my youth and I LOVE seeing the stripes on the guitars and cymbal stands, etc., without having to see the band all bumblebee'd out!

The other real stand-out for me is "You Don't Even Know Me", which has a total 80s throwback vibe, with the guitar riffs and tone, as well as Michael's wailing vocals, sounding like they could have been written and recorded during the To Hell With The Devil sessions.  "Own Up" is pretty decent, also, with a bit more of a modern, bottom-heavy sound, and some slight production effects added to Michael's vocals on the verse sections.

There are a couple of lesser tracks here for me, but by no means do they fall to the level of filler material...they just aren't quite as strong as those first six cuts and the last two.  Oddly, all three fall in consecutive order, with "Sea Of Thieves", "Beautiful", and "Can't Live Without Your Love".  Of the three, "Beautiful" is the best of the batch with some big, thundering drums leading off the track and powering their way throughout the song's entirety.  I can envision this song being the full-band return to the stage after a big drum solo from Robert.  It has some strong chorus vocals, also, but it just doesn't really grab me like most of the rest of the record, although it has grown on me more and more with repeated listens.  Thankfully, we don't have to sit through any saccharine sweet ballads of the "Honestly" ilk, and the slowest thing on this album is "Can't Live Without Your Love", which really doesn't hit ballad level.  It is also one of the few Stryper songs I can recall off the top of my head that speaks directly to humanly love, with no possibly way to interpret the song's subject as being God, as the chorus is pretty blatant:  "Woman, I can't live without your love/Every moment is just what this dream's made of/Can't live without your love".  And you know what?  Good for Stryper!  I get so sick of people thinking that Christian bands, or bands of Christians, or however you want to label them, can't sing about anything but God and Jesus.  These guys are married with kids and families and if they want to sing about Earthly, human love, so be it.

In the end, this record isn't quite up to what Fallen and No More Hell To Pay are for me, but it is Gosh Darn Close (see what I did there?!).  Take away a couple of tracks, however...especially the out-of-left-field opener, "Take It To The Cross"...and everything people have come to love about the Yellow And Black Attack since their rebirth is still there in a big way.

On a side note, new bass player, Perry Richardson (ex-Firehouse) did not play on the record, nor did longtime bassist, Timothy Gaines (or his original replacement, Tracey Ferry, who played on 2009's Murder By Pride).  Bass was handled by a guy by the name of John O'Boyle, who does a heckuva good job carrying on the Stryper sound and style!  It will be interesting to see...and hear...how Richardson fits in live, as Gaines' bass and harmony vocals were a part of Styper's live show for so many years.

One final not here.  Michael Sweet produced this record, and I would like to suggest to Frontiers Records that Mr. Sweet produce ALL of their studio records, as he has an amazing sound on the three albums Stryper has released for the label.

Rating:  Just a slight slip from the level of the past two records, but still exceedingly crankable!  Give God Damn Evil an 8!

Back To Reviews Index
Posted by arttieTHE1manparty at 6:28 PM