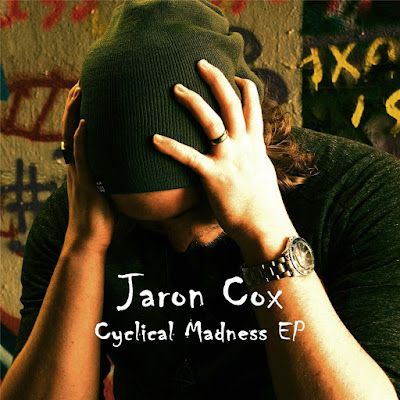 They say good things come to those who wait.  For Jaron Cox, the two years since he released his debut EP most likely seemed like an eternity of waiting, but it now looks to be paying off, as "Twisted Carousel" has rocketed up the Christian rock and hard music charts here at the end of 2019.  In fact, at the time of this review, the track has reached the number one position on the www.ChristianRock.net charts! Not bad for the North Carolina rocker whom I had never even heard of prior to hearing the single.

All three tracks on Cyclical Madness fall into a modern rock classification that doesn't stray too far from the sounds of Cox's influences such as Disciple, Decyfer Down, Skillet, Thousand Foot Krutch and the like.  Of course, the fact that his guitar player/producer, Brandon Mills, is the guitarist from Decyfer Down, and that his drummer, Joey West, is from Disciple, could have something to do with his sound.  To be fair, however, none of the songs here sound all that much like DD or Disciple, but the genre Cox works within is one he shares with all of his influences.

The album starts off with "Temptations" which is a solid modern rock track, but it's not quite on par with what is to come, as I don't find it quite as catchy as "Twisted Carousel" nor as edgy as "I Will Rise".  It's not as if it's a bad track, and I hate to use the word "filler" on the first song of a three song EP, but to be honest, that is kind of what "Temptations" feels like.  I wish it had a really solid guitar solo in it to spice things up, and Mills has some nice soloing-styled work going as the song exits, but it's a little too late for me.  The message is a great one, however, with Cox singing about man being pulled toward sin and our struggle to resist it.  I don't skip the song by any means, and it is musically solid, but just not that memorable, at least to me.  To be fair, though, it would be tough to be as catchy or "hooky" as "Twisted Carousel", which is definitely the cream of this three track crop.

If I had to make a guess, I think that "I Will Rise" will garner some airplay in 2020 and will likely follow "Twisted Carousel" up the charts.  Another modern rocker with an edge, this track also incorporates a rapped vocal section courtesy of North Carolina Christian rapper, Primisis.  Taking a cue from the likes of Manafest, POD, and TFK, "I Will Rise" is still a rocker at heart, but the cross-genre approach will likely appeal to a large portion of the modern rock crowd, and it certainly doesn't hurt to have some great guitar work from Mills thrown into the mix!

Cox is a good song writer and I think he shows a lot of promise with this EP.  Musically, the performances here are top drawer, with Mills really doing some excellent rhythm guitar work throughout.  As I mentioned previously, I would have loved to hear some ripping guitar solo work, but as we all are aware, that is not always the case with modern hard rock.  So, when that is the situation, solid rhythm work is a necessity, which this album definitely has.  West is a great, great drummer, and his years of experience at the kit for Disciple really lends a strong hand to the tempo and rhythms of this record.  Cox proves himself to be a more than capable bass player, as well as a strong singer.  At times his higher range is reminiscent of TJ Harris from Decyfer Down.  There is some moderate use of effects on his vocals, especially on "Twisted Carousel", but nothing is AutoTuned here.

The packaging is very simple, as it is just a simple cardboard slipcase with the above artwork as the front and an alternate photo of Cox on the back, along with some very simple thank yous and credits.  CDBaby issues the CD, even if you purchase it through Amazon (as I did), and digital versions are also available at the usual outlets.

Here's hoping that this little EP is the start of big things for Cox, as I think he has some definite talent.  I couldn't be happier for the man and congratulate him on his breakout success with "Twisted Carousel".  Let's just hope that it doesn't take two more years before another song of his gets the airplay it deserves!

Back To Reviews Index
Posted by arttieTHE1manparty at 9:47 PM