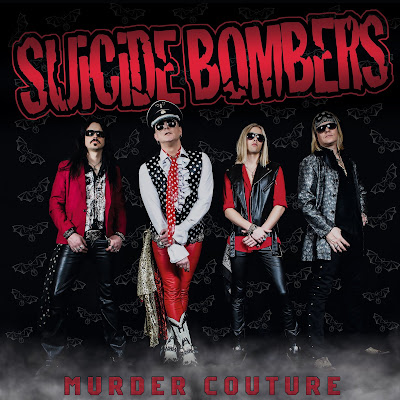 Sleaze is one of those genres that many people have a hard time defining, but those same people will tell you they know it when they hear it.  Well, if that is the case, then I can guarantee they will know what they are listening to when they hear Norway's Suicide Bombers, because there is little doubt about what these guys are all about!

As is typical with these guys, the album starts off with an intro, and despite my general disdain for intros (and outros, which this album also sports...), I give this one a listen the first few times through the record.  A monotone voice intros the band amongst the sound of clicking camera shutters and the muttering of a crowd of paparazzi.  Humorous, especially when the band is referred to as "Ludwig van Beethoven for the next generation"!  Good stuff...

Things really get going as soon as the first song, the album's title track, kicks off with a catchy guitar riff from Teaze which pulls the rest of the band into the fray.  Right away, the catchiness of Suicide Bombers is evident, even as the sleaze drips from Doll's snarling vocals on a track which may be considered to be rather glam for these guys.  That glam feel likely comes from the guitar sound, which is a bit cleaner on this track than on most of the others, but it is the "cleanliness" of that opening riff that makes it so noticeable as it echoes throughout the rest of the song, worming its way into the brain.  The chorus is catchy, and the gang-shouted "Murder Couture!" vocals are the perfect complement to the song's hard-charging pace, adding to the frenzy of the track.  A great opening track, to be sure.

Things only get better as they get sleazier, and that is what happens with the next track, as the guitars take on a grittier, dirtier edge as soon as "Kings & Queens" hits.  Sure, the pace slows just a bit, but the attitude doesn't wain at all.  I really like the solo that Teaze drops in here, and the rhythm section of Slim and Starr is as strong as Suicide Bombers has ever been, which is saying something, as I have long felt this band has been exceptionally tight despite the line-up changes from album to album.  Of course, it is Doll who commands the listener's attention, as his vocals rasp their way through the track. One great thing about the Bombers, and especially Doll, is that despite being from Norway, an accent has never been an issue in understanding what Doll is singing about.  That is an absolute bonus for me.

"So Bad" is up next and it is definitely one of the real highlights of an album full of great songs.  But when Doll kicks things off with a line like "when the lights hit the shape of your body" you know that some sleaze-infested greatness likely follows.  I love the backing vocals that sneer their way through the chorus, dragging out the syllables of "you've been so bad" just enough to pack a little extra attitude into the words.  In fact, the gang vocals on this entire record are spot on, and the work done here is superb.  Again, Teaze rips into another blistering solo, and Starr's drum work is excellent, with some nice fills and tempo changes.  Check it out below...


"Love Disasters" is a different cat here, with a more 70s inspired guitar riff opening the mid-tempo number.  Simplicity is the order of the day on this laid back number that sounds like Cheap Trick with an attitude problem...and a throat infection.  The classic rock guitar tones work perfectly in this lovable oddball of a song, and I find myself hitting repeat on this track a couple of times when I work through the record.  Everything here catches me, from that opening riff to the guitar tones on the solo to the layered backing vocals to the drum sounds and production used here.  Is it my favorite track?  At this point, I may actually have to say yes, but that's a tough call.  With so many great songs on a single record, it is tough to nail down favorites.

One thing that really stands out on this album is the fact that there are no dead spots.  In fact, I think the album actually closes even stronger than it opens!  Starting at about track seven, the band is just on full blast, ripping and tearing their way to the end.  For example, "We Don't Negotiate With Terrorists" is a song that I jump to with great frequency, even if it's just to hear the vocal acrobatics Doll has to go through to fit all of those syllables into one chorus (he achieves this expertly)!  I love, love this song!  Likewise, "Sleepless Elite", with its dirty opening guitar riff and simplistic drum line, just reeks of classic Sunset Strip era sleaze attitude, and when Doll snarls "suicide sex squad" as the first three words of the track, it is obvious where this track is headed...and it only gets raunchier as it goes (although it never crosses into Rated R territory, at least language-wise).  These two songs are Suicide Bombers at their best, in my opinion, both lyrically and musically.  Teaze is especially strong on his solo for "Sleepless Elite", which is an absolute string melter.

Heck, even when the band slows things down, they do so with vicious musical intent, as on the slowest...and possibly angriest...track on the album, "Worlds Without  End".  This is another track that I would have to say is in contention for best on the record, and I absolutely love the guitar riff on this song.  Just because it is a bit slower (don't think ballad, however) doesn't mean the guys don't absolutely bring it with intensity here, and when Doll proclaims "you're a cancer spreading disease from a laptop", you can definitely feel the angst directed at the song's antagonist.  Teaze blasts forth with a straight-from-the-80s fret-running guitar solo that is one of his best, and once again, the backing vocals on the chorus are spot on.

I also really like the vocal hook that is the chorus of "Madman", which is the closing musical track of the album.  Another uber-catchy guitar riff opens the track, and Doll charges headfirst through the track as he tells the listener to "call the doctor...call the ambulance...call the undertaker" in succession, hinting at the mayhem he is about to unleash.  Again, Teaze lays into another ripping solo, and the rhythm section is relentless...including Doll's underappreciated work on rhythm guitars...keeping the tempo blasting along, never wavering.  Another great uptempo rocker, "Madman" puts a great bow on the package of Murder Couture, wrapping things up as neatly as can be expected when the package is such a gloriously loud, sleazy, raucous affair!

At the end of the day, Murder Couture is one of those albums that you really have to listen to in order to understand just how good it is.  Yes, there are numerous great songs here, but this is an instance of the sum being even better than the parts.  It's not that this is a concept album, because it isn't; its that there is a flow to the record that adds to how good each song is.  I feel pulled to the next song, even as I'm still running the previous one through my head; I just want to hear what comes next.  Everything here is so catchy and so well performed that it is all memorable to some degree, which rarely happens with albums these days.

Suicide Bombers is a band that continues to grow, continues to expand their musical ideas, and continues to get better, without losing sight of who they are or who their fans are.  Since starting off with a bang on their debut, Criminal Record, the band has made at least minor improvements every time out, and Murder Couture is the pinnacle of the catalog...at least to this point.  In fact, there is no question that Murder Couture is the best record Suicide Bombers has put out yet, and it is easily the best sleaze record to hit my mailbox or inbox this year!  No self-proclaimed sleaze fan will want to miss out on the excellence of Murder Couture.  Grab your own copy and see if you don't agree!

Back To Reviews Index
Posted by arttieTHE1manparty at 12:21 PM