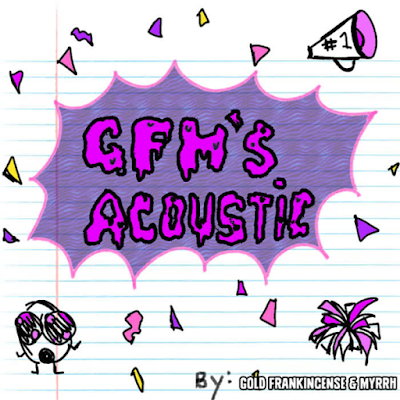 Okay, for the most part, this whole stripped-down acoustic thing has run its course.  For the most part, all the listener is given is an EP or album filled with unplugged renditions of songs that the artist thinks they can safely pull off with very little thought or effort put into changing things up or putting consideration into how previously heavy material is going to come across in the acoustic setting.  But all of those things are "for the most part".  They are not the way Gold, Frankincense, and Myrrh do things, thankfully.

The normally heavy, aggressive, often-harshly screamed music of GFM has been dumped on its head by the English sisters, and the result is a fabulously delicious mess.  Of particular note is the strength of the girls as musicians.  Acoustic music typically exposes weaknesses, in my experience, as you can't disguise a flub with more distortion or volume.  And, there are a few such flubs here, and the girls just blow through them.  For example, the lead vocals on "Graveyard Of Identities" stretch a bit too far in the second verse and come a bit off key at one point, but the girls just seem to shrug it off, seemingly owning their imperfections, and move on.  Musically, the skill exhibited by both CJ and Maggie on their stringed instruments is impressive, and hearing the girls all sing in clean vocals and HARMONIZE so well is a real treat.  I also really like the alternative percussion used by Lulu on a track like "Twisted Humanity" or "Give Me A Sign", both songs where she employs either congas, or perhaps tunable bongos, to deliver a rich tone that fits so well with the string work from her older sisters.

Perhaps even more impressive to me is the rearrangement of these songs.  All four are tracks that have been released as singles at some point, so most listeners are already familiar with what they are hearing.  With that familiarity, there is often a tendency to stay safe and not challenge either the performers or the listeners to be open to something different.  That is NOT the case here, as all four songs have been reworked, with "Give Me A Sign" being particularly impressive to me.  The changes in vocal pitches, the way the backing "whoas" are still incorporated, but in a more haunting way, and the gentle incorporation of some piano (not sure who is playing that), really alters a song that is really aggressive in its usual form.  In all honesty, all four of these tracks are actually uptempo numbers and not songs that most bands would have chosen to rework, as there is a lot of change that was required to put these songs together in this new fashion.  Most bands would have played it safe with ballads, or at least more down-tempo numbers.  Not so with GFM.  Color me impressed.  And, lest you think the girls incapable of pulling this song off in the live setting, check the video below.


I have no way of knowing if these were done "live", or if they were all recorded in multiple takes over multiple sessions, but it matters little in the end.  The musical maturity shown by these three young ladies is worth noting, and GFM continues to prove that they are so much more than just a sister novelty act.  GFM is an act that deserves to be paid attention to, and they seemingly command that attention more with each release, including this little 4 song EP.  I genuinely hope that another acoustic effort is offered up by the girls at some point in the not-so-distant future, especially if it is anywhere near as good as this one.