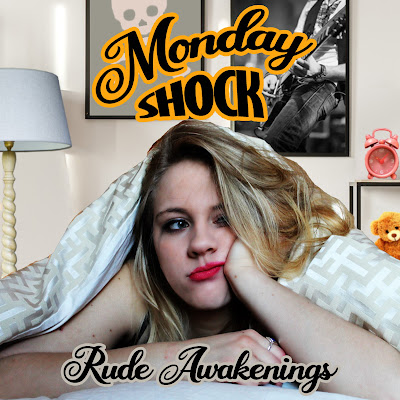 Monday Shock is something of a project band that was put together by well-known Italian producer, Oscar Burato, who not only produced this project, but also co-wrote the songs here.  The result is a catchy, fun EP that combines not only an obvious love for 80's melodic rock but also the bouncing tempos and rhythms of the 90s pop-punk sound.

"Rude Awakenings" is a throw-away intro that teases the listener into believing they are going to be getting some sort of 80's synthpop band here, which is 100% not the case.  An alarm clock sounds, and we hear the cover model yawn before the electronic drums and synthesizers kick in.  The joke is carried out very convincingly, I must admit, because for the first minute of this EP, I have to admit I was a bit concerned as to what I was getting here.

"Blind" is the first real song here, and it is a good one.  Rhythm guitars and drums open the track, along with an obvious bass presence and just a hint of keyboards as a supporting instrument, which is generally how I like to hear them incorporated.  The song has a fun, bouncy tempo and a definite pop sensibility to the song structure, but this is definitely melodic hard rock.  Marchi's vocals kick in and instantly my mind goes to a young Klaus Meine as far as the tone that he uses and the accented-but-understandable lyrics.  The guitars here are really good, with Dabellani showing some flair in what sounds to be a largely tapped solo and some solid rhythm guitars throughout the track.  A promising musical start to this short 3 song EP (we won't be going back to that intro anytime soon.)  Check out the video for "Blind", the debut single, below.

"Your Side" is another catchy, uptempo rocker, with the pace and rhythm very much in line with a lot of the pop-punk songs of the 90s I mentioned at the outset, but once again, this is very much a melodic hard rock track with a really strong bass presence, tight drumming, and more guitar flash from Dabellani.  I did some research on Dabellani, and apparently the guy was basically just a session player and cover band guitarist before jumping on board here.  Also a songwriting contributor on this EP, I have to think someone is going to grab him up to play for them at some point if Monday Shock doesn't go forward from here, because his talent is unquestionable.  By the way, that bass presence I talked about previously comes from Nicola Iazzi, who may be familiar to some as the one-time bassist for bands such as Embryo, Firmo, and he worked for a brief time with Hardline.  This is a fun rocker that feels like summer, and I have no doubt it will be released as a single in Europe where music such as this still has something of a voice on the radio.

"Spirit Of Life" starts of with a soulful blues guitar intro blending into the full band as the EP closes with this very strong ballad.  Again, Marchi's vocals take on something of a younger Klaus Meine tone, and the whole song sounds very much like something the Scorpions may have tackled on their more recent releases.  The backing vocals are superbly done, and the music here, especially the guitar work, is pretty much spot-on.  An excellent close to a pretty strong debut EP from a project that I hope continues on.

As one might expect, the production here is excellent, with Burato at the control board.  If you are at all familiar with the sound of bands on the Street Symphonies or Logic II Logic labels, then you have likely heard Burato's work, as he was the co-founder of both of those labels.  There is a level of polish to these tracks, but not so much that the guitars lack bite, the keyboards dominate the sound, or that the drums sound overly processed.  This is just a fun experiment that I feel deserves a chance to be explored further, just to see what happens.

Very, very short, especially when the evil-tease intro is thrown aside, Rude Awakenings is harmless fun that should mix well with just about any modern Euro-melodic rock you want to mix it with.

Rating:  You really can't go wrong with this little effort, so crank it to 7 and let's see if anything further comes of Monday Shock!

Back To Reviews Index
Posted by arttieTHE1manparty at 1:08 PM