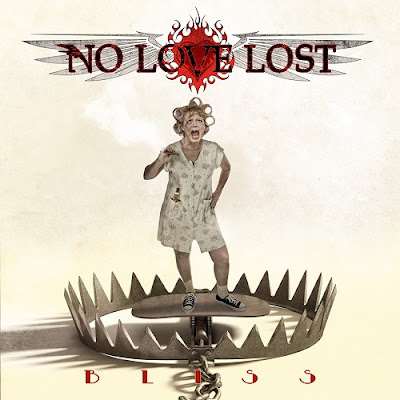 Seven years is a pretty good stretch between albums, but believe it or not, that is how long it has been since No Love Lost released their debut album.  And, as should probably be expected with such a significant time gap, there have been some changes to the band.  In fact, outside of vocalist Scott Board and guitarist Jason Staton, No Love Lost has undergone a complete facelift, adding a second guitar player, and replacing the entire rhythm section.  (It should be noted that on the album, according to the liner notes, the "rhythm section" is just one guy...Erik Johnson of Bombay Black).  The result?  A much tighter sound, with bigger hooks, catchier rhythms, and overall better songs than those on the debut.

The album opens with the thunder of drums and a big, arena rock guitar intro, and "Keeping Up With The Jones" is off and running.  The track...and much of the album, honestly...hearkens back more toward the hard rocking arena sound of a band like, say, Foreigner, or perhaps more like Night Ranger; never quite venturing into that "hair metal" sound, but always comfortably close with plenty of guitar and big, full drums.  To me, that was a bit of what didn't work 100% for me on the debut record; the band didn't sound like they knew who they were yet.  But on Bliss, that problem is definitely solved!  A big part of that is due to the powerhouse that is Scott Board on lead vocals.  His pipes slot him in that mid-tenor range for the vast majority of the songs on this record, although he does showcase his ability to climb the ladder a bit when necessary.  Smooth and soulful, Board's vocals pack quite a punch on the big rockers, while incorporating an emotive side on the slower material.  On "...Jones", and follow-up rocker, the uber-catchy "Believe In Love", which just may be my favorite track on the record, Board is dominant, sounding extremely confident in his delivery and the material, which is top notch stuff this time around.  "Believe In Love" has the perfect style for summer, with an edgy rhythm guitar to kick things off as the drums start to build and the bass rumbles forward.  To me, this is the kind of track that just screams fun and begs to be repeated, with a catchy chorus that will likely spend a lot of time rattling around your brain once the track ends.  Staton rips through a great solo here, as well, and just a couple of songs into the record, it is clear that Bliss is a notch or two better than its predecessor.

Up next is "Love Song", but lest you concern yourself that this is a big power ballad, a la Teslas track of the same name, this is a definite rocker from start to finish.  Staton lays into a killer solo before the final run through the chorus section, when newcomer, Marc Brown, gets to share the six string stage with a big outro solo of his own.  Excellent backing vocals, including some big "whoa whoas" from the gang, provide additional support for Board's leads, and the band sounds like they are having an absolute blast with this catchy rocker that was co-written by the three men mentioned here.

"Heart Strings" again teases at slower material with it's title, but the rocking guitars, the pulsing bass...and the COWBELL...shake those thoughts aside rapidly, as No Love Lost powers through another melodic rocker.  Once again, the construction of the song is just so much better than a lot of the music being released today, and it is evident the band put some serious time and effort into building solid melodies and big hooks into each and every track here.  Once again, Staton showcases some seriously understated talent on guitar, and the backing vocals are perfectly executed.  A bit more on the Night Ranger-ish side here, especially with the guitar solo and the bigger, fuller sound, "Heart Strings" is another track that has already found its way onto one of my road CDs and frequently gets the repeat treatment from me.  It's right there with "Believe In Love" and "Good Times" (more on that in a minute), as far as my favorites go.

"Under Construction" employs an interesting percussion line (did someone say bongos?) and great combination of acoustic and electric guitar work from Brown, who is credited with all the guitars on the track, including a great solo that brings the band back to an acoustic pre-chorus and then a final run through the chorus.  Nicely executed and not your typical approach to slower material, "Under Construction" shows the versatility of the re-tooled No Love Lost and is definitely impressive.

Edgy guitars snarl their way back onto the scene as "World Is Wide" jumpstarts the music back to a higher voltage style.  Again sounding more akin to Night Ranger here than anyone else I can think to compare them to, this is the type of song that No Love Lost absolutely dominates.  This is really good stuff, and Brown again shows off some serious finger fire as he tears up and down the frets on the solo and the outro here.  Not to be outdone, Staton handles all the axe work on the next track, the equally catchy rocker, "No Secret", which slots more into that Foreigner comparison I made at the outset, particularly in the approach of the guitar lines that support the verses, as well as the way Board's vocals take on a more direct, more urgent (no pun intended) sound and style.  This is the kind of rock that I really found myself drawn to as a teen, and the pull is still there on "No Secret".  The bass line is solid throughout the track, and the bursts of guitar fire in the middle of the track are exquisite!  We even get a short burst of double kick in the drums as the song scorches toward a close.  Really, really good stuff here!  Maybe this is my favorite song....  Hmmm....

"Little Things" continues with the catchy melodic rock, with Staton handling the big solo here.  There is a definite Dokken feel to this track in its melodic approach and the guitar hooks that Staton throws into the mix.  Board is particularly strong here, dropping his range to some of the lowest points on the album and pulling it off expertly, with a generous dose of support from the truly impressive backing vocals of Staton, Brown, and bass player, Matt Crow, as well as Erik Johnson of Bombay Black.

"Heaven Sent" has some really catchy harmonic guitar work to intro the track, with both Staton and Brown getting shots at center stage on their own, as Staton handles the main solo and Brown scorches the outro.  I actually love it when the guys share their duties like this as you get the feeling that there is a chemistry, and perhaps even some friendly competition, between the guys that really brings these tracks to life!  On "Heaven Sent", Staton sets the bar high as he RIPS through his solo run, but Brown seems to be his equal on his run out of the song.  And not to be forgotten is the soaring vocal work of Board who really lets his notes carry at the end of the song, expressing a power and control that not a lot of guys seem capable of matching in today's rock scene.  He truly is an impressive vocalist that you owe it to yourself to hear.

Speaking of impressive vocalists, Mr. Paul Shortino shows up to join Board on the remake of the classic "Good Times", which finds the band in rollickingly fun form!  The piano from Travis Mobley is inserted brilliantly into the song and has a definite part to play in this southern rock staple that multiple bands have covered over the years.  Definitely a fun track to drop into the mix here, and one that I hope finds its way into potential live sets, although I realize it could be difficult if one of the guys doesn't have some keyboard skills.

Things close out in fine, hard rocking form with "Face The Fire", which may be the hardest hitting track on the record.  I can't say enough about the powerful addition that solid backing vocals provide to a song, and they show up in spades here, especially on the chorus as they support Board on the soaring "face the fire!" section.  Just expertly performed.  The drums are given a heavy dose of life on this track, with a big, thundering arena rock feel, and the fret-melting solo from Brown is just icing on the cake here.  And did I mention that Board is just a dominant singer across the board here?  I did?  Oh...well, it needs to be said again.  And if I already picked a favorite track on the album, it might be because I hadn't gotten to this one yet, because it has to be in consideration for that title as well.  What a killer way to end a damn fine record!

Incredibly catchy and pure ear candy from start to finish, Bliss is a monster of a record that I see spending a lot of time in my CD player this summer.  From start to finish, there isn't a filler track to be found or a weak performance to be heard.  Kudos go to the production team of Sims and Johnson, as well, as they pulled the best from these guys seemingly on every track recorded.  The mix is bright and clear, but not so slick that it feels synthetic; there is still grit and edge to the guitars, and the bass gets a full-throat rumble in the mix, as well.  Yet another excellent addition to the Kivel Records discography and an album that will likely find its way onto many people's Best of 2020 list come year's end!  Grab your copy now!

Back To Reviews Index
Posted by arttieTHE1manparty at 9:27 PM