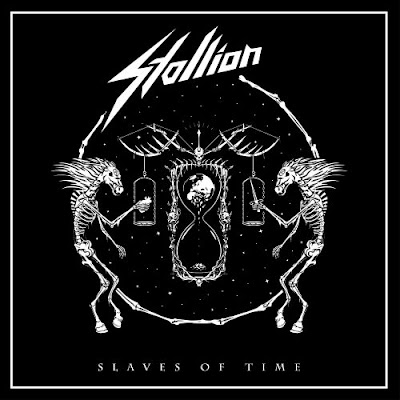 Ah, those Germans.  Not so great in World Wars, but excellent in metal, especially when it fast, heavy, and loud!  Speed merchants, Stallion, throw their hat firmly into the ring of current metal contenders with Slaves Of Time, their third release for High Roller Records.  Full throttle riffs, machine-gun fire drums, rumbling bass, and high, screeching vocals are the weapons employed by this band which seeks to take the musical clock and dial it back to the 80s speed metal scene when bands such as Exciter, Agent Steel, Heathen, Anvil, and early Helloween were tearing up the frets on their guitars and making your ears bleed with their high pitched vocalists.

"Waking The Demons" kicks things off with a thunderous, somewhat plodding drum cadence and some searing guitar licks, before the rhythm guitars kick in and the speed picks up, courtesy of Axxl and Clode.  Pauly's distinct vocals snarl their way into the mix, and whether you love his approach or hate it is going to depend a lot on your feelings towards the 80s heavy metal/speed metal scene.  For those of you who love it, Pauly...and, indeed, Stallion...are going to be right up your alley, as his vocals have a high pitched, snarling approach that was fairly commonplace in the 80s, especially with German bands.  The rhythm guitars are fast and furious, and the drum work from Aaron keeps the frantic pace up nicely.  This is definitely a great start to the album.

From here, things actually manage to get faster, as "No Mercy" is unleashed, and even Stampfe's bass comes rumbling out at a speed that would have made a young Metallica sit up and take note!  Gang-shouted backing vocals support Pauly's piercing wails, and the tempo changes incorporated here make for some interesting listening, showcasing the band is about more than just speed for speed's sake.  The same can be said of "Kill The Beast", which also features some blistering rhythm guitars and sprinter-style double kick bass work from Aaron, but again incorporates a level of musicality one might not expect to hear from a band like Stallion.  The guitar solo nearly melts the strings off the guitar, sure, but there is a musical complexity to the solo that is more than just running up and down the frets as fast as humanly possible.  Both tracks are well worth the listen.

"All In" slows the pace just slightly, adding a bit more traditional heavy metal to the sound and coming dangerously close to being octane-infused sleaze metal, a la Nitro.  Using that Nitro comparison, the solo work on this track is absolutely masterful, and Pauly's vocals match the intensity of the music note for note, in much the same way Nitro's frontman, Jim Gillette used to.  To me, however, Pauly doesn't have the cartoonish quality that Gillette used to interject at points, and Pauly is actually very strong in the mid-section of his range.  Man, I don't know...I've heard/read a lot of people bagging on Pauly's vocals, but again, I have to question where in the metal timeline they jumped in, because if it was early-to-mid-80s, they should be loving this stuff!

"Die With Me" is the epic song of the album, clocking in at over 7 minutes (everything else is under five minutes in length), and is the real "miss" track of the record for me.  This is the one and only track where I have to say that Pauly's vocals really don't fit what the music is doing here.  For all intents and purposes, this is the band's attempt at a metal ballad (don't think hair metal power ballad), but Pauly is just TOO Pauly on this one for me.  Musically, it isn't bad at all, and perhaps if the vocals were mixed a bit further back, things would've worked out better.  Actually, by the time we hit the 3:30 mark, the mix has balanced out, the lower-registered backing vocals are working, and the song manages to right itself to a large degree, but by then it's going to be too late for most people, I think.  The guitar solo is top notch, and the rhythm section does a really nice job, but I think the majority of listeners will have checked out by the time the song solves some of its initial missteps.

If "Die With Me" is the longest song, then we owe some love to the shortest, correct?  "Dynamiter" is just a tad over 2:30, and is pure 80s metal worship from start to finish.  Intense drum work, rumbling bass, and more rhythm guitar notes than you hear in some albums today blaze through the track, and while it isn't the fastest track here, it is one of the most fun, just for the sheer intensity of the track.

"Merchants Of Fear" ventures into thrash territory, and is possibly my favorite track on the record.  Pauly spends some time in a far lower register than the falsetto territory he works most of the album in, and the music has a bit harsher edge than some of the other stuff here, which is why I say it drifts across that imaginary "speed/thrash" line to a degree.  Also of special note for me is the album's closer, "Meltdown", which has pretty much the perfect combination of everything that Stallion does, all in one track.  A strong drum presence sets the stage for some rapid fire rhythm picking, a high voltage solo, and probably the strongest, most in-control vocal performance from Pauly.  This song is exactly the kind of stuff I was listening to from 1986-88, for the most part, as I was out doing construction work and wearing out cassettes on my Walkman.

The production is a bit retro sounding (of course it is), but it doesn't sound cheap, hollow, or tinny, nor does it sound like it was recorded in your basement on a boombox.  The guitars, especially, have a strong, clean voice, which is required when you are dealing with the kind of savage speed that Stallion regularly unleashes.  As I mentioned earlier, the vocals get a bit heavy in the mix on occasion, but that is the exception rather than the rule, and outside of "Die With Me", this is never an issue that I find off-putting.

Look, in the end, if you are looking for something highly serious, look somewhere else, as that is not what Stallion is about.  This is a band about three things:  speed, metal, and fun.  And they definitely have those things on Slaves Of Time.

Rating:  Impossible to deny this band's love for, and mastery of, the 80s speed metal scene, and impossible not to crank!  Crank this to 7!