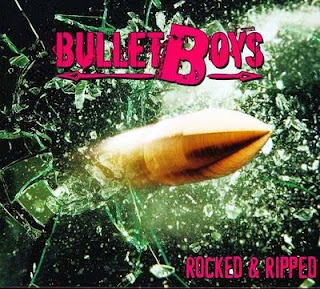 When, oh when, are we going to put a bullet in the idea of 80's bands doing all-covers albums?  Not only has the idea been done to death, it is not being done very well in most cases.  I wish I could say that this new Bulletboys attempt at the lame trend is the exception, but sadly it follows the rule.  This is generally NOT a good record at all, although there are a couple of above average tracks here and a few out-of-the-ordinary choices that keep from bombing totally.

Most of these albums fall into one of two camps.  There's the "do it as close to the original as possible" camp and then there's the "make it our own" camp.  Marq Torien and his "band" (he has fired all of these players at last report...) generally stick to the paint-by-numbers style here, with very little variation in most of the performances.  Musically, "Dr. Feelgood" is pretty much a clone of the Motley Crue version and, perhaps surprisingly to many, Vince Neil actually does a better job vocally than the usually smooth-Torien, who sounds like he is having a bit of trouble controlling his screams.  "Livin' On A Prayer", likewise, does virtually nothing musically to distinguish itself from the original, although less than stellar production doesn't help the sound.  On this track, however, Torien's voice sounds considerably stronger, but still not in the same arena as good ole' Jon.  Poor production once again damages what could have been one of the best songs on this album with the third track, a cover of Eddie Money's "Take Me Home Tonight".  Torien's voice sounds really good here, but the recording is so muddy it is almost hard to listen to.

I have to say that I was shocked to hear the attempt to cover Journey's "Faithfully" because you are talking about one of the most well-known hard rock/arena rock/AOR songs of all time.  Guess what.  It is probably the best song on this album and is EASILY the best cover version of this classic I have ever heard (unless you count the multiple versions of Journey covering themselves through the years...).  Torien doesn't try to outsing Steve Perry or alter the song to make it something it isn't, and as a result he really delivers here.  Excellent work here that gave me hope that maybe there were a few more gems to dig out here.

Before we get to anything even remotely good, however, Torien and Co. absolutely BUTCHER a couple of classic songs.  "Balls To The Wall" is terrible, especially with the bizarre vocal effects Torien uses here.  Musically it is almost dead-on, but, wow...these vocals are BAD on the verses and, well, there is no other Udo, so Torien really stood no chance here.  This is one track that would have been better off left on the cutting room floor.  Tom Petty gets the slaughterhouse treatment next, as Torien really can't do the chorus justice and, once again, the production is just of very poor quality.  For a non-Petty fan like me to tell you I actually PREFER Petty's version is pretty bad, so take that for what it's worth.

Things look up a bit with Styx's "Renegade".  Once again, a MASSIVE classic is actually handled fairly well here, so Torien is back in good graces with me for the time being.  However, that is pretty short-lived as "Falling In Love" by the Scorpions and "The Rover" by Zeppelin are just not performed well, in my opinion.  Sandwiched in there is a cover of a Pink song (yes, I said Pink), with "F**kin' Perfect".  I don't think I can come up with an adjective to explain how bad this song is...seriously...so I won't try, because terrible doesn't even begin to touch it.  The same can be said of the absolutely brutal performance of "I'll See You In My Dreams".  Seriously, Giant is about as close to AOR perfection as you can get and for someone with Torien's voice to attempt to pull off Dann Huff is laughable.  The production is, once again, abysmal, and the guitars are nowhere near the caliber of Huff's.  Again, a track that should never have been attempted.

"Colder Weather", for those who do not know, is a modern country song by the Zac Brown Band.  It is an odd choice for inclusion here, but it is performed pretty well in general, although there are still some muddy production issues.  Not a bad song at all and a gutsy call as this is a pretty popular song.  On the flip side, Amy Winehouse's "Rehab" is brutal...just brutal.  Of course, I don't like the original, so maybe I am being a bit harsh here.

"Broken Wings" is simply out of Torien's range, and on the occasions he is close, production again destroys the effort.  Elton John's "Tiny Dancer" fairs no better.

The one thing you would think the band couldn't screw up is their own song...right?  Wrong.  Torien sounds like he has lost his ability to scream, and since that is how the song starts, things just go from bad to...well, not good at all.  Really sad to hear the one truly recognizable song of the Bulletboys (for most people, anyway) get such a rough reboot.

This is not a good record by any stretch of the imagination, and I would never recommend buying it.  If I was you, I'd shell out a couple of bucks to download the songs I gave good words to, and then track down originals of any of the other songs that interest you.

Rating:  Turn this down to 4, with two or three tracks being all that kept me from turning it all the way off!


Posted by arttieTHE1manparty at 9:15 PM