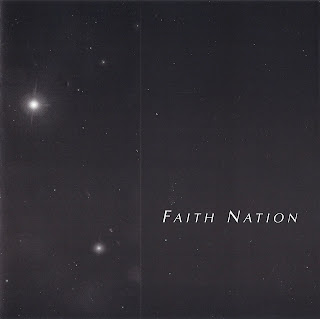 Okay, be honest. Who knew that Faith Nation had a CD out BEFORE their Oridnary People release from 1999? Not this guy. In fact, I stumbled across this one totally by accident and picked it up on a whim, wondering if it was, in fact, the same band. The answer to that question is yes....and no.

I say no because other than lead guitarist and main songwriter Huey Peterson, and bass player Matt McClay, there are NO members on both albums. However, I also say yes because there is no mistaking the style and sound between the two albums. It's not like the two remaining members totally morphed their sound and became a different band between albums.

One thing that always makes me nervous is when I look at the band line-up, see five members, but only ONE guitar player. That, to me, screams keyboards are gonna be very prominent on this album. Not surprisingly, that is definitely the case here. On this self-titled album, things start off very promisingly with the rocking "When God Came Down" that, while incorporating a good dose of keys, still manages to keep the guitars out front for the most part and utilizes a solid, if short, guitar solo. This song is a very nice hard AOR track with some great vocals and an excellent message about God coming to Earth in the form of Christ. Very promising start.

Sadly, at least for me, things don't stay the course. "We Shall Stand" gets very keyboard-laden and almost wanders out of rock territory and into pure CCM territory. One cool thing about this song, however, is the way Peterson's solo weaves the classic Christmas carol "The Little Drummer Boy" into what turns out to be a nearly full minute long outro that also incorporates some of the words from "Amazing Grace". All in all, its a pretty cool song, just not overly hard rocking by any stretch.

"Then Love Came In" is the only true ballad on the album, but other songs such as "Eternally" and "All That I Am" are both decidedly much slower in tempo than the album requires, as it is rarely out of mid-tempo territory. A couple more real good hard rocking tunes would have served this disc well, but sadly after the opening track, the only real rockers are "Book Of Life" and "Grace Me", both of which remind me of Volz-era Petra for some reason. "The Raven And The Dove", oddly, sounds more akin to early Schlitt-era Petra, at least in the arrangement of the song.

Peterson rips off several tasty solos, with the efforts on "The Raven And The Dove", "All That I Am", and "Give Me More" being particularly strong. McClay and Roussin do a fine job of holding things together, and Gilbertson is a more than capable vocalist. In fact, I would go so far as to say I prefer Gilbertson's voice to that of James Salter who would leave The Brave and take over the microphone for Faith Nation on the next release. And, to be fair, Helm has a lot of talent on the keys...they are just far too heavily implemented for my tastes. As a fan of hair metal and melodic hard rock, I can appreciate keyboards as enhancement instruments, with the occasional big role in a well executed power ballad, but this album is so keyboard heavy it drips of sugary gooiness that I just can't swallow in large doses.

One thing that I noticed on this album as opposed to the follow-up disc, Ordinary People is that this disc is a lot less lyrically vague as far as a true Christian stance. That is repeatedly the number one knock I read on reviews of Ordinary People...that it is just so wishy-washy and spiritual, almost New Agey at times, rather than Christian in its lyrics. That is not the case here.

If you can find it, and you are a fan of the more well known Ordinary People, then by all means, pick up Faith Nation if you find it for under $10 or so. If you have to shell out more than that, which I am guessing you will, I personally wouldn't spend it; this album is just too slick, too keyboard heavy, and too CCM meets AOR for my tastes.

Rating: Turn this one down to 4.5, with Peterson's guitar solos being the only reason it scores that high.

Back To Reviews Index
Posted by arttieTHE1manparty at 1:43 PM