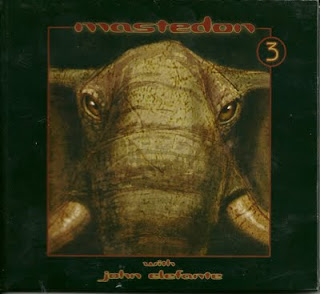 As one would likely expect, especially after looking at the list of players, there is a definite Kansas influence on this album in places, but it is not as overwhelming as one might believe.  For fans of that legendary progressive rock band, John Elefante is a familiar name as he was the vocalist and keyboard player on albums such as, Vinyl Confessions and Drastic Measures.  Additionally, Kerry Livgren's is a name that is exceptionally well known, not just to Kansas fans, but to fans of prog rock in general.  Even more, Mastedon chose to include an updated version of "Dust In The Wind" as a bonus track for this album.  But Elefante also does his best to mix in a heavy dose of melodic rock, AOR, and even some classic rock sounds on this latest effort from Mastedon.  With all the early hype this album was receiving, and with me really enjoying the first two Mastedon discs, it isn't surprising that I was really anticipating this new album which comes more than a decade after the last Mastedon effort.  So, does 3 stack up to the greatness of the legendary Kansas or to the equally great, though lesser-known outside of Christian circles, previous two Mastedon records?

Sadly, I am pretty disappointed in the album overall.  There are some strong pieces here, but the songs really just don't do much for me.  Neither as progressive as anything Kansas did, nor as gritty or edgy as anything done on the previous Mastedon albums, 3 is an overall bland venture to my ears.  Sure, John's voice is still very strong and there is no doubt that Livgren is a highly talented guitarist, and that shows through in places here, also.  But something is missing, and I think I have a couple of ideas as to what that missing link (or links) may be.

First, the previous Mastedon albums were quasi-all-star albums.  Elefante recruited dfferent players and vocalists for various tracks on both It's A Jungle Out There and Lofcaudio, but on this album Elefante handles all the vocals and while Livgren and Dave Amato (REO Speedwagon) add some guest the lead guitars, this is basically a set band of John on vocals, brother Dino on guitars, Dan Needham on drums, and Anthony Sallee (formerly of Whiteheart) on bass.  As such, I think part of the problem for me is that there is not a great variety in the sounds here.  Yes, I know that most bands utilize the same musicians on every song, but that was what was unique about Mastedon, at least for me; I didn't view Mastedon so much as a band as a project, and that is now gone.

Secondly, this album is just too smooth and slick for its own good, which should be expected, at least to a degree, as this is what the Elefante Brothers are noted for in their production styles.  But with that smooth, slick production, some of the emotion seems to be lost in these songs that a bit rougher production might have brought out.

Finally, this albums suffers from a problem that a lot of melodic rock/AOR albums seem to be suffering from recently:  mid-tempo syndrome.  Everything here is so mid-tempo (or slower in some cases) that everything just kind of runs together.  There are not a lot of highs or lows...just a bunch of middles.  A couple of tracks here seem to be begging to really rock out but they are never allowed to.  "Water Into Wine" and "Lying" are perfect examples of this, and are the "hardest" tracks on the disc, although I think "hard" is overstating it.  "That's What You Do" has some rock to it, also, but not a lot.  Otherwise, everything here is of about the same tempo unless it drifts solidly into ballad territory.  Sure, a lot of it is melodic with some high quality musical performances, with "Revolution Of Mind" and "Slay Your Demons" being a couple of tracks that come to mind, but incredible musicianship just doesn't equate to incredible songs, at least for me.

What is ironic is that the two songs I enjoy the most are the two I likely should NOT enjoy the most.  The remake of "Dust In The Wind" and the big progressive rocker "One Day Down By The Lake" are the two songs that I can honestly say I enjoy here.  Why is that ironic?  Simply put, I am not, nor have I ever been, a Kansas fan with the exception of a couple of songs, yet these two tracks have the biggest Kansas feel to them and are the two most unique sounding songs on the album.  To me, it really says something when a remake is considered a unique song.  That being said, Livgren is in fine form on "One Day..." and at more than ten minutes long, it does give the listener an expanded taste of what I think this album could have been but sadly is not.

Rating:  It is really hard for me to say this, but I would recommend turning this down to 4.

Back To Review Index
Posted by arttieTHE1manparty at 2:32 PM