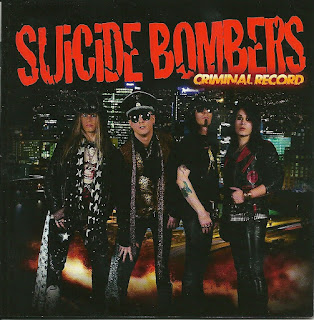 There's something to be said about a band that has fun and doesn't take themselves too seriously.  There is also something to be said about a band that perhaps takes themselves TOO seriously.  At times, it is a bit difficult to determine which camp Norway's Suicide Bombers fall into on their independently released Criminal Record album.  How serious can you, or should you, take a band who refers to themselves as The Sleaze Fuhrer", "The Sex-Gunslinger", "The Bitch Commander", and "The Outlaw Groover"?  In fact, even after repeated listens, I am still not 100% certain if this is a serious project...such as a Zodiac Mindwarp...or something of a joke...along the lines of a less vulgar Steel Panther...but I can say with absolute certainty that there is a good degree of talent to be found in this band and on this record.

Things start off with the album's "trailer", complete with band member introductions, which should make it abundantly clear as to my confusion about whether or not this album is completely on the up-and-up.  However, once the music starts with a pummeling drumroll the band comes out swinging full-force with the ripping sleaze-fest, "Let's Rock N Roll".  "Easy Access" continues in the same manner with another full-steam-ahead, sleaze-drenched romp, giving Leather a chance to really flash his guitar prowess.  In fact, if it is this style of music you are after, Suicide Bombers pack plenty of hook-laden, riff-packed sleaze onto this album, with "High On Explosives" being the best, and others such as "Electric Fire", "Bombers En Vogue", and "Riot" all falling in line not too far behind.  And, while not as high-octane as the other mentioned, "Princess Socialite" is definitely one of the sleaziest tracks here and definitely worth checking out.

The album only slows down on one of the actual songs here (ignoring the intro and outro), and that would be on "Smoke And Mirrors", but even this is not what I would call a ballad...more of a brief breather would be more like it.  "Teenage Breakdown" has a bit more of a classic rock feel to it, and "Napalm Heart" is more straight ahead hard rock, less sleaze, than the rest of this disc, but all three are solid, if unspectacular additions to the album.

There are a couple of weak spots for me.  "Cindy" is pretty bland overall, and doesn't add anything to the album.  "This Time Tomorrow" also misses the mark here, but I can't really tell you what it is I don't like about it; something just doesn't "feel" right about it.  Maybe it's the song's location between "Napalm Heart" and "Smoke And Mirrors" that makes it seem out of place.  Not sure, and it's not a horrible song, just not a high point, either.  And, as I have said with many other albums, while cute a time or two, intros and outros, no matter how entertaining or well thought out, get old and become an annoyance with repeated listens.  The first and last tracks here are no exception.

There is a good deal of talent to be found here, with Lazy Leather's guitar work being of top-notch quality pretty much throughout the disc.  Chris Damien Doll's songwriting is also of a pretty high caliber, and his vocals, while eerily familiar at times, are distinct enough to keep him from sounding like an 80's sleaze clone. The rhythm section is smooth and tight, perhaps even a bit TOO tight for those who like their sleaze to be a bit sloppy and loose, but they certainly don't detract from the structure of the songs.

I was surprised at the quality of the production, as so many indie projects seem to leave something as important as production on the "things to do" list.  Suicide Bombers were smart to put some extra effort into this department as it helps the majority of these songs to rip and claw their way to life, especially in the guitar tones and the separation of the instruments.  Sure, it's sleaze, so there is a certain level of sludginess to the sound, but you can tell it is an intentional feel and not the side-effect of sloppy work at the control board.  The packaging is also top notch, with full band pictures, brief movie-style bios (what would you expect?), and lyrics, which I always rate highly, especially when checking into new bands.

I love it when a new band surprises me, and Suicide Bombers did just that, for a number of reasons.  Definitely worth checking out, especially if you find a way to snag it without having to pay big import prices to get it.

Rating:  Crankable, to be sure!  Crank this to 7.5 and decide for yourself how seriously you should take Suicide Bombers!

Posted by arttieTHE1manparty at 11:26 AM