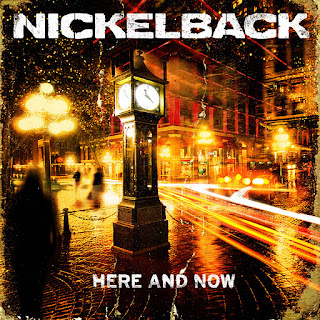 The Kroeger Brothers and their little band called Nickelback are...umm....back, so let the cat-scratching and hair-pulling begin!  Seriously, there is no doubt this album is going to be slagged on by half of the rock world and absolutely adored by the other half, and the two groups basically can't find middle ground.  I do not know if there is a more polarizing band in hard rock right now, and I really don't get it.  People who think that Nickelback can't rock out with the majority of the modern era of hard rock bands most likely have never heard anything other than the radio singles (of which there are several here), or they have never listened to anything mellower than Slayer, Overkill or old-school Metallica.  The whole "post-grunge" label that is stuck on the band is outdated and irrelevant, as, for the most part, Nickelback left that sound behind several albums ago and have come out the other side as pretty much just a straight-up hard rocking band that releases albums featruing absolute rockers, a couple of ballads, and one or two "party" type songs.  This is especially true of 2008's Dark Horse album and now this new offering, Here And Now.

This new album starts off on a definite hard-rocking note with "This Means War", a driving, up-tempo number that sounds like a direct continuation of the sound that was used on the hardest numbers on Dark Horse.  Kroeger (Chad that is...) rips through the vocals here in semi-angry fashion, especially on the chorus, and the guitars rip things up nicely here.

Follow-up track, the rock-radio single "Bottoms Up" slows things down just a bit, but not into ballad territory or anything like that.  The song features pretty much your standard hard rock style with some more snarling guitars, a drinking theme, and even some retro guitar effects being used, which really gives the listener the feeling that Nickelback is going out of their way to completely shed that stupid post-grunge tag, going for a far more straight forward sound, which works very well.

"When We Stand Together" is pretty much the type of pop-radio track that just gives Nickelback bashers fodder for their cannons, but damn if it isn't catchy with it's danceable drumbeat and group "hey-ey-ey-yeah's".  Lyrically, the track features a solid message, much like their previous "If Today Was Your Last Day" effort.  Haters will hate it, lovers will love it...period.

The album kicks back into overdrive with the smoking "Midnight Queen", and several more hard-rockers that follow such as "Gotta Get Me Some", which reminds me a lot of "Shakin' Hands" from Dark Horse albeit just a tad slower. "Kiss It Goodbye" is another pounding rock number with a huge arena feel to it that will have fans singing along instantly.  "Everything I Wanna Do" is like "Animals" on steroids, although it is done in a sleazier, groove-driven way that is a hard rock sexual soundtrack.  While managing to keep the lyrics PG-13 (suggestive but never filthy), the band leaves no doubts as to what they are hinting at here.

There are also a couple of blatant radio stabs, which I think people have to expect from Nickelback.  "
"Trying Not To Love You" and "Holding On To Heaven" both have Top Ten written all over them and will likely be video hits as well if the band chooses to release them.  But is the fact that these songs are mid-tempo or ballad material that teens and women are going to love a good enough reason to hate this band?  I don't think so...not at all.  Remember the power ballad era of the late 80's?  Who do you think those songs were written for?  Why do you think they were released as singles?  To get the women to the shows and to get the bands airplay.  Hey, it's a formula that has proven to work, so if it ain't broke, as they say...

Is this the best Nickelback album ever?  That depends largely on what you like from the band.  If you are after the harder sound of Dark Horse, or even the harder edges of All The Right Reasons then Here And Now may be the best of this style the band has offered thus far.  If you are more inclined toward the "post-grunge" (what does that even mean?!) of Silver Side Up or The State, you are likely to be disappointed.  And, if you are someone who just wants to bag on anything and everything this band does...you will have plenty to work with because this is a 100% Nickelback record.  They don't try to be someone they are not and Chad's vocals are exactly what they have always been...which is good, or bad, depending on your slant.

Rating:  You're gonna hear it here, first....crank this to 8.5 and let the hating begin!

Back To Reviews Index
Posted by arttieTHE1manparty at 6:03 PM