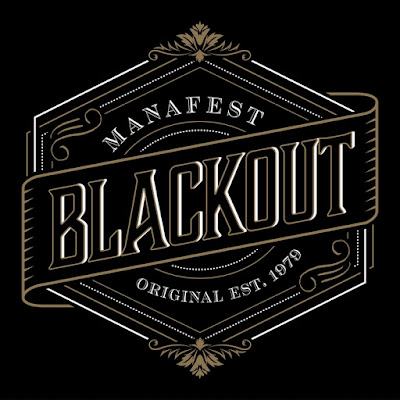 (c) 2021 Independent Release
Canadian Christian rap-rocker, Manafest, is back with this surprise little EP, Blackout.  I call it a surprise, but I probably shouldn't, as Manafest is continually releasing new singles, regardless of if he has a current album out, and Blackout is simply a digital collective release of his last two singles and the new title track.  Both "Save You" and "Light It Up" have been released over the past six or seven months as singles, and both have charted well on Christian rock charts.  "Save You" is the current single, currently residing in the Top 10 at ChristianRock.Net and TheBlast.FM, and features supporting vocals from RedLight King on one verse and in the chorus sections.  This is the "heaviest" of the three songs here, with some solid guitar riffing with a good deal of crunch and a nice, dark tone.  "Light It Up" is a lot more electronic in its approach as it uses some effects and synth work as the bed for the verse sections and an electric drum throughout the track although there is a gritty guitar line to open the track which loops back through the track a few times to help support the choruses.  Nothing earth-shattering or overly original...in fact it's a bit repetitive for me, but it is catchy enough and obviously struck a chord with both Christian rock radio and his fans.
The new track here, "Blackout", leans heavier on the rapping of Manafest than the other tracks, but it still incorporates an edgy, crunchy guitar presence during a really strong chorus section, while some acoustic guitars are heard to ring in throughout the slower-paced track.  This song about the horrors of drug/alcohol addiction is a very well-written song that I think will catch on with Manafest's fan base in a big way, and I would anticipate it charting very well, as is pretty much the norm for Manafest.  While I like all three tracks here, "Blackout" is the choice cut for me at this point.
The other three "songs" here are simply the instrumental tracks for the three featured tracks, and I honestly listened to them once and then deleted them, as they are not something I would ever listen to again.  I do know that a lot of younger fans are really into instrumental tracks for various reasons, especially those that are really into creating social media mixes and clips, but that isn't this guy.  I just put the three full songs in a mix with a couple of other free-floating singles Manafest has released over the past year or two and burned it for my sons.
That last sentence, of course, leads me to my one true issue with this EP:  it is digital only.  Now, perhaps all three tracks will appear on a full-length CD later on this year, which wouldn't be surprising since that kind of thing happens all the time.  But if you want the tracks now, the only way to get them is digitally.  Of course, the good thing for a lot of people is you can get the three full songs AND the three instrumental tracks for under $4 from Manafest's webstore.  You can snag your own copy HERE
I'll admit to being a fan of Manafest, even though he isn't going to be the cup of tea of everyone here.  No worries as you can simply move on if you are not interested.  If you are interested, know that if you have been a fan of the artist's more rock-oriented material from the past couple of releases, This Is Not The End and Stones, you are likely going to find yourself liking the three new songs on Blackout, assuming you haven't already heard at least one or two of them.
Rating:  Again, not a real fan of rating EPs, especially when half of the tracks are just instrumental mixes, but there is nothing to keep you from cranking the three full songs included on Blackout.  Really give the title track a chance if you decided to download this digital EP.
Back To Reviews Index
Posted by arttieTHE1manparty at 4:56 PM No comments: