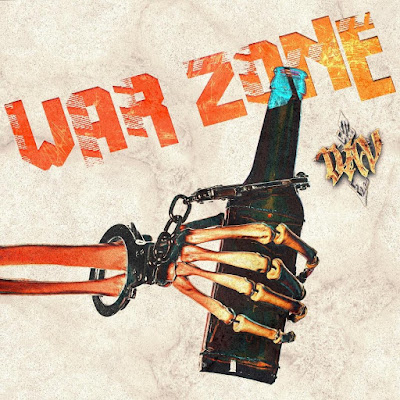 Following the end of his previous band, In The Verse, Dave Hanson embarked on a new project, known simply as DAV (both a shortened version of his name and also an acronym for Delivered, Adored, Victorious), which released a handful of singles in 2018 and 2019.  Two of those singles, "All It Takes" and "Scratching The Surface" hit the top spot on various Christian rock charts, and Hanson decided to expand the project to become a full group.

Of course, one of the things that will likely draw some attention from casual fans is the fact that Lori Peters, formerly of Skillet, plays on almost half of the record.  Other outside friends joined in the project, as well, with Jon "The Revelaytor" performing the guest rap vocals on "All It Takes", and Ian Sebastian of Ignescent contributing bass on "The Abyss".  And while those things are all great, the key thing to take away here is that DAV is a true band project now, not just a side project from Hanson with some friends filling in as needed.

War Zone, as a record, is a bit of an experimentation of styles, with the record basically being broken into modern rock tracks and modern metal tracks...with a few fun quirks thrown into the mix.  "Crazy" kicks things off in that modern rock mode as Hanson proclaims, "I don't care what fear says, The Reaper does not scare me!/ I am saved by the Cross, You can call me crazy!"  The guitar solo coming out of the second verse is a real treat, as there is some serious string shredding going on courtesy of Bryan Arzaga.  Lori Peters was on board for drums on this track, and her style is one that fits the track well.  Punchy, without being heavy-handed, the percussion is a driving force here and definitely helps to set the tone for this full album release.  Definitely a solid way to kick off the record, and "Crazy" is a track that should feel comfortable to fans of Hanson's previous project, In The Verse, or anyone familiar with the tracks dropped last year.

"New Name" is something of an outlier on the record, as it incorporates some significant electronic elements into the track.  It never really crosses over into industrial territory, and it definitely isn't dub step or techno, but there are elements that will surprise a lot of people, especially when the laser blasts start firing following the first run through the chorus.  The guitars keep this firmly in modern rock territory, and the drumming from Lori Peters is rock solid, as would be expected from the Skillet alum.  I can't help but like the song, even as I find myself asking, "Just where did that sound come from?"  The message here is excellent, also, as Hanson sings about redemption in Christ, regardless of what our weaknesses are or what our sins have brought us to.

The title track straddles the line between being a really heavy, full-fledged metal track and the more modern radio rock sound Hanson found success with in both In The Verse and the DAV EP.  Hanson, himself, adds some deathy backing vocals, along with Milton, and there are some great rhythm guitar riffs, but the majority of the track stays relatively radio friendly...at least as far as hard rock radio goes.  "War Zone" is definitely one of my favorite tracks on the record because it gives fans of multiple styles something to sink their teeth into.  After kicking off with the sound of a beer bottle opening, some rugged rhythm guitars cut their way into the mix, and once again Peters' drum work graces the track with some serious thunder, but without dominating the overall feel of the track.

I previously said "New Name" was "something of an outlier", and that is because as odd as that track may strike some listeners, "Your Name" is going to slap most people in the earhole with a strangeness that DAV fans will likely not see coming.  We are talking full-on electronic sounds and some almost bouncy keyboard elements...I mean, we're talking nearly circus like instrumentation...embellished with blackened screams in the background and a sweet, sweet guitar solo that is an absolute string-bender, packed with emotion and talent.  I don't even know where to go with a full description of this track because it is just so...unquantifiable.  It's just...wow...  You simply need to hear it to understand my lack of comparison or description.  And that's not a bad thing...it's just what it is.

"What I Can't See" is a full-fledged praise and worship track set to big arena drums and edgy guitars and modern production elements.  Deeply passionate about his love for Christ, Hanson pours himself into his vocals on this bright-sounding track that I could even hear being sung in a youth group or a younger congregation church.  I have to say that it is not out of the realm of possibility that DAV could eventually put out a full praise record, and a song like "What I Can't See" would fit extremely well.  It's a bit of a surprise to hear, but it is a welcome one.

And then there are the truly heavy moments, which are scattered all across War Zone.  "The Abyss" is the first really metal moment on the record, and it doesn't disappoint.  Opening with some demonic-sounding screeches, "The Abyss" combines Hanson's instantly recognizable clean style with some truly deep growls from Jacob Towns, and is, to me, a natural progression from a more hard rock/modern rock track like "Scratching The Surface", which hints at being heavier than it probably is.  Mix in a blistering solo, with a really cool guitar outro to close the track, and you have one beast of a song that will likely garner some metal airplay at some point on TheBlast.FM or a similar station, even if it may be a bit too heavy for the likes of ChristianRock.Net.  This is some ferocious music, but hang on, as this isn't even the heaviest moment on the record.

"Reach Out" is another full-on head banger which incorporates about as much metallic variety as one can pack into a track.  We have Hanson's clean vocals, and then both guttural death vocals and screeching black metal vocals used as supporting voices, all within one song, and that doesn't even get into the different effects used on Hanson's voice in various spots.  Heavy guitar riffing and some thundering drums are accompanied by programmed orchestral elements, giving the music a really full sound with a serious dose of melody in spots.  I know it sounds like it could be a musical train wreck, but it actually works extremely well, and I truly home that "Reach Out" ends up being a single off this record, as it is a really good track.  I love the message, also, as Hanson exclaims, "Brokenness is not weakness...Reach Out, Reach Out!"  Later he professes, "I know that I am alive, Found God, No longer broken!"  Really a potent message for those who may feel they are lost and worthless, broken and beaten down.

Album closer, "Addiction", really unleashes the blackened vocals at an even higher level than "Reach Out" did, and Towns is also able to scrape the bottom of the vocal barrel with some more harsh growling.  There are some impressive drum fills from Gallipeau, with a lot of double bass work, and the breakdown section chugs along with some serious intensity, even if it is relatively short.  Guitars swirl all over the place in a mosh-pit inducing frenzy of sound that wraps War Zone up in a punishing fashion.  Hang on at the end, as there is a false ending before a massive guitar run that pushes things into borderline thrash territory that you absolutely need to hear!  A great way to close things out!

All of this goodness and I haven't even mentioned the two big singles from last year that were also added to the record.  I know a lot of people aren't necessarily fans of cross-genre vocals, but I really like what Jon "The Revelaytor" brings to the huge rock radio hit, "All It Takes", with his rapid-fire rap vocals adding a different focal point as the guitars churn beneath his rhymes, while there are supporting  screams from Milton that add a different depth level.  Meanwhile, the more hard rock track, "Scratching The Surface" also genre-bends just a bit by dropping straight death vocals into the mix as part of the pre-chorus and bridge sections of this chug-chug-chug rocker that was all over Christian rock radio for the better part of the last year.  To me, it says a lot about Hanson's writing ability, as well as his comfort with who he is as a musician and his understanding of his audience.  The fans of DAV pretty much gobble up whatever he puts out there, and with good reason, as DAV truly delivers with War Zone.

One of the greatest strengths of the record, outside of the variety of styles, is the production.  War Zone sounds like a big-time project, with excellent production, which is quite a statement when you are talking about a 100%, non-label-backed, independent release.  The different vocal styles are evenly matched, which is often not the case as the "unclean" vocals frequently dominate the mix on other projects...sometimes even label projects!  The guitars have a nice, gritty feel to them, and the drums, regardless of who is playing them, have a very full sound.  There is zero muddiness here, and I was very happy to hear the quality of the production here.

Snag your copy on iTunes or your favorite music outlet!

Rating:  Definitely crank-worthy in all its various forms and fashions!  Crank this one to 8.5 and rest assured that there is likely something everyone will like about War Zone!  Almost guaranteed to be fighting for top indy release of the year on this site, as well as others!

Back To Reviews Index
Posted by arttieTHE1manparty at 5:06 PM No comments: