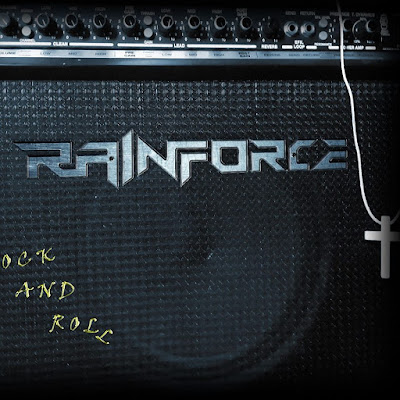 Rainforce returns in 2019 with this four track, follow-up EP, Rock N Roll, to try to maintain the momentum they garnered following their popular 2017 debut, Lion's Den.  Continuing in the vein of metal-influenced three chord hard rock, a la AC/DC, Dirty Looks, Krokus, and X-Sinner, Rock N Roll is a solid, if short, entry into the 2019 musical fray...and it is a good one!

The album starts off with the title track, and this is pretty much pure AC/DC worship, start to finish,  with vocals that sound freakishly like Rex D. Scott from X-Sinner (they are not...I asked Rex, just to be sure).  Jordan Cutajar (also of Pylon) handles all the vocals, and this guy deserves some SERIOUS props, because he has a range of vocal styles that is rather uncommon, being able to handle the lower, edgier backing vocals as well as the snarly, higher-pitched leads!  From the rhythm guitar riff to the pulsating bass and big kick drum/simple snare pattern utilized by the Aussie rockers, there is no denying where La Morte's passions lie, musically.  Lyrically, there is no misunderstanding his passions, either, as his faith if on bold display here, but he gets his point across without Bible-thumping the listener.  Take the chorus as an example:  "The world around us is constantly changing/But really good songs stay really good songs/Some good things never come to an end/Our faith in Christ and love for....Rock N Roll!"  Nothing pushy, nothing offensive, but also definitely not backing off from where he stands.  And when he isn't busy writing the songs and lyrics, La Morte is also slinging a pretty mean axe, filling this song with tasty riffs and a powerful solo.  A great start to this EP on a track that I would swear is a long-lost X-Sinner track (if you've never looked into this classic Christian rock band, you need to!)

"In Good Hands" continues the three chord love fest, but with Cutajar taking the vocals into a far lower range than those utilized on "Rock N Roll".  Even in this range, Cutajar holds his own, adding a hint of snarl to his lower tenor vocals, while the backing vocals on the chorus add a bit of depth.  Not as impressive as "Rock N Roll" or the next track, "Stay Strong", but still very solid, straight-forward hard rock with another really nice solo from La Morte, who really backs off the distortion pedal for much of the lead work here, giving the song a smoother, more 70s-influenced guitar presence here.

"Stay Strong" heads back to the AC/DC-inspired vocals, and is the second best track on the record.  A thumping, plodding hard rocker, the interplay between the lower, snarlier vocals, and the higher, more-screamed Brian Johnson-styled vocals is pulled off in excellent fashion, and the rhythm section of Brand and Mann is in full effect here!  Again, La Morte shines on the guitar parts here, tackling both rhythm and leads, and handling both with expertise.  The tightness of the band really shows through on a track such as this one, and it sounds like the band is having a lot of fun with this material, right up to the cold ending.  Love it!

EP closer, "The Lost Sheep", is an acoustic-based number.  I'm not really sold on this song, to be honest, although I do appreciate the message.  I just think going the acoustic route here after pumping out three solid hard rockers is kind of a letdown, especially when we only have four songs to absorb here.  Perhaps the band would have been better served to hold onto this track for a full-length studio record, and instead dropped another blast of rock on this EP, even if it was a cover of an X-Sinner tune (hint, hint) or something.

Bassist Brand did the producing on the EP, and he does a commendable job.  The mix is solid here, and the production is clean, with no muddiness to be found.  Mine is a digital promo copy, so I have no idea about the packaging of this project, but generally, Roxx Records does a solid job in this department, so I have no real concerns there.