SILKED & STAINED "Love On The Road" 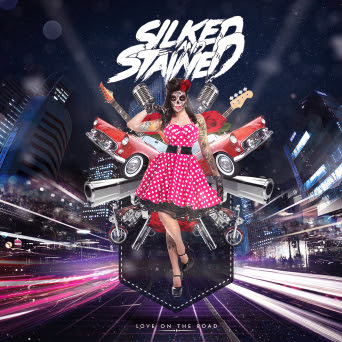 Sometimes, I can't help myself.  I judge an album by the name of the band.  How can you not?  I mean, when a band calls itself "Silked & Stained", the first thing that comes to mind is a certain philandering ex-President and an intern...right?  RIGHT?!   But then, once I figure out the band is foreign and that English is likely their second (or third, or fourth...) language, I try to give them a bit of a pass on the name and go ahead and give the album a review solely in its merits, musically.  Sometimes the band is every bit as bad as its name, and other times I am pleasantly surprised.

Hailing from Greece, Silked & Stained plays a decidedly European form of melodic hard rock, often incorporating more keyboards than this guy really finds necessary, but usually allowing them to slide into a supporting role once they have been unnecessarily utilized in several song intros.  Otherwise, this debut album, Love On The Road, is largely made up of solid rhythm guitars and nice, steady bass work and some big, thundering drums, all supporting above average to very good guitar solos, and smooth, decently powerful...but fairly heavily accented...tenor vocals.

The album kicks off with the lead single, "Bombshell", which is a pretty decent indicator of where the band is musically throughout the record.  While not the absolute best track on the record, for my money, the bump-and-grind rhythm section has a definite late 80s feel to it, and the guitar solo, which starts out rather laid back, ramps itself up in both speed and intensity as it goes on.  Tsaklidis is a bit hard to understand in a couple of spots, which became glaringly obvious to me when I followed along with the lyric video below and realized I had a couple of lines COMPLETELY wrong!  Still, a very nice lead-in for this album and one that sets the stage pretty well.

"Hold My Hand" is another solid 80s rocker, more in the Bon Jovi radio rock style, especially with the keyboard intro and straight-up drum approach that are anchored by a rhythm guitar/bass line that are pretty typical of that time period.  Gavalas has a definite grasp of the sound of the era, and his lead guitar work is one of the highlights throughout the record, the solo here notwithstanding.  I actually find myself wishing his solos would extend a bit more in several places, as I wonder what would happen if the guy just completely cut loose.  He sounds that talented to my ears.

"Much Love" had me thinking the band was covering Danger Danger's "Naughty Naughty" for a second, as it has that exact same type of keyboard intro, but it is quickly replaced by a far more melodic, far less hairy, style of hard rock.  The keyboards become more of an electric piano sound in the background, and they are actually a nice addition to the overall feel and sound of this mid-tempo rocker, which is not something I regularly say, but they do cross the line into annoying territory right before the guitar solo, which is very skillfully executed, by the way.

"She's Not There" is a pretty nice hard rock track, and in the top half of the record, with some really nice rhythm guitar work and an interesting drum pattern.  The backing vocals are solidly executed here, also, giving this song a nice, full feeling.  Again, the keyboards are kept to a minimum and kept at a distance, which benefits this track to a large degree.  "She's Not There" rounds out a pretty solid first four tracks on this all of a sudden rather surprising album.

The first real misstep on the record comes with "Anytime Anywhere", but it is a fairly big misstep.  This song has just an abysmal keyboard intro that makes me want to chew on glass every time I hear it!  Seriously, no matter how bad I feel some of the keys on "Much Love" were, they are nothing compared to this song's intro.  Oh my goodness these are bad.  BAD! And this track is the only one where I really have any issues with Tsaklidis' vocals, which come off as just overly sugary.  If I had to make a comparison of my overall impression of this song, I would have to say it is very much in the ilk of Sheriff's lone hit "When I'm With You", which I couldn't stand, or the atrocious Bad English ballad, "When I See You Smile".  Ugh.  I skip it even before the jingly, tinkly, crystally keys hit, sometimes jumping on the skip button even before "She's Not There" finishes fading out, just so I don't risk hearing this song!

The band and record are quickly redeemed with the excellent "Lonely Road, which kicks off the second half of the record and is possibly my favorite track on the album.   This big song has enough power chord riffing and emotive vocals to capture most listeners' full attention, and the sweeping guitar solo is really, really good.  Oddly, most of the best tracks on this record are actually on this second half, come to think of it, with the remaining tracks all being decent mid-to-uptempo rockers with the flashy "Rockstar", with its excellent guitar work and a pretty cool tempo change on the bridge leading into the chorus section, being a definite contender for top song on the album, along with the the very 80s Dokken-sounding "Believe", and the hard-charging "Born To Run"...which is NOT a Springsteen cover.

Speaking of covers , the band covers the Police stalker track, "Every Breath You Take" on the CD, but due to licensing issues, it is not included on the digital review presskit I received.  Bummer, as I would have liked to have heard where the band went with such an iconic song.

In the end, the music is well-executed, the songs are mostly above average, and there is something very likable about this band.  I could definitely do without the grating, tinkling keyboards on "Anytime Anywhere" as well as a couple of questionable intros, but these things don't diminish an otherwise strong performance from a band that is, at the very least, worthy of keeping track of in the future.

There is no way I anticipated enjoying this record as much as I do, and I find myself returning to it time and time again.  Here's hoping the band gets some recognition in the States and throughout Europe...maybe even Japan...and is able to continue on, as I think they have quite a bit to offer.

So much for judging a book by its cover...or a band by its name, I suppose...

Rating:  Suprisingly, I find myself really liking this record, cranking it to 7.5 .

Back To Reviews Index
Posted by arttieTHE1manparty at 8:30 PM