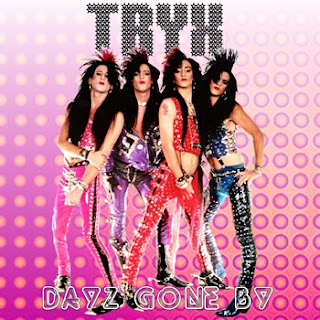 Glam fans, listen up.  One of the most over-the-top glam bands to never sign a record contract, Tryx finally has (some) of their music officially released on this nice little collection from Demon Doll Records.  Sometimes referred to as the "Purple, Red, Pink and Blue Crew", Tryx likely suffered from a visual image problem more than they did a musical image problem as these four guys were so out there with their look (check the hair in the cover photo) and style that I sometimes wonder if that is what turned record labels off.  Originally from Florida, by all accounts, Tryx was one of the top-drawing acts on the Sunset Strip in the late 80's and very early 90's and managed to record 3 demos and an EP before deciding to go their separate ways after years of frustration.  I am very glad to finally get to see and hear an official release because I can tell you that this band's music is some of the hardest to find (at least with decent audio) and most widely sought after in the demo trading markets that I have frequented with some regularity.

For those not familiar with the scene, or the differences in styles, the glam sound that Tryx encorporated has very little in common with what a lot of people call "glam", i.e. bands like early Poison or Warrant.  Tryx is FAR poppier in approach than either of those bands and have virtually none of the hair metal sound that Poison and Warrant both incorporated.  Tryx has more in common with bands like The Sweet, T. Rex, and Slade.  This is especially apparent in songs like "She's So Fine" which bounces along with a slightly upgraded 1970's glam rhythm.  Another example is the somewhat odd cover choice of the 1969 Archies hit, "Sugar Sugar" which keeps a lot of it's late 60's charm but is juiced up just enough to bring it to the Strip.  The band's big ballad, "Hold On" would never be classified as a power ballad or Monster ballad as it is far too sugary to have likely ever garnered even Top 40 radio airplay, let alone rock radio airtime.  This is not to say that these songs are not good or don't hold a certain charm to them, but I don't want readers of this review to think they are getting a band that sounds like Firehouse or Winger or some of these other bands that are frequently mis-labeled as glam.  Think Bang Gang and not Bangalore Choir when comparing the Tryx glam sound to what some people call glam.

The "raw, unmixed" tracks included here have a definite demo-quality sound to them of varying quality.  The rocking "You've Got A Lot To Learn About Love" doesn't really sound any different than "Sugar Sugar" or "Hold On".  On the flip side, "Only For The Summer" has a VERY garage recording quality to it, which is too bad because this mid-70's mid-tempo groover is one of the best songs the band recorded.  "Whatever Happened To Tomorrow" is so raw here that it is practically unlistenable, to be frank, and I can guarantee I would skip it every time it came on just because of the poor quality.  It is cool to hear the song, however, if you have never had the chance, and it gives the listener yet another glimpse into the overall sound of this band.   What makes it VERY frustrating to hear "Summer" and "Tomorrow" is the fact that I personally have better sounding versions of both of these songs than what Demon Doll used on this compilation.  I think Demon Doll would have been better served to have done some more snooping and digging before committing these particular versions to CD.

The video is a neat little inclusion using old concert footage interspersed with some computer graphics and shots of an obviously more recently recorded young lady dancing in her lingere to "She's So Fine".   The live footage is what really makes this and I wish they would have left the other stuff out.  It is easy to see from the video that these guys put a lot into their look and performances, and I think it would be cool to dig up some more concert footage if it is of good quality.  Am I going to watch this little video dozens and dozens of times?  Not at all, but again, for people who are new to the band, this is a good way to not only hear, but also to see, what this band was about.

Obviously, this CD does not leave me without at least some frustration.  I have collected 22 different Tryx songs through the years, with 18 of them being studio recordings of various quality, with the other four songs being live versions.  I'm not sure why Demon Doll didn't do a complete two-disc career retrospective, which I think would have made for a KILLER collection!  Also, I am a bit confused about the origin of some of these songs, as Demon Doll stated in their press release that the first seven songs on Dayz Gone By were released between '87 and '89, but all these songs were just demo recordings as far as I know...and none were on the 1991 High Stakes EP.  I don't know if this was merely an oversight or if the High Stakes EP was never an officially released album.  Maybe we will never know unless there is another Tryx CD released by Demon Doll or someone else in the future.

Still, main issue with this package is one that I have had with Demon Doll releases in the past:  the remastering quality.  While Demon Doll claims to have digitally remastered the first seven tracks here, but I have to say that if that is true it is one of the weakest remaster jobs I have heard in quite some time.  The sound on some of these songs is still very tinny in places with very little in the way of bottom end.  The drums sound a bit hollow, especially on a song like "Cross My Heart", although even this sound is a couple of steps up from most of the demo copies I have heard out there.  "Sugar Sugar" also has majorly hollow-sounding drums in the recording. Now, not all songs suffer from these problems.  For example, the tape warble that is commonly heard on "Don't Want To Know Your Name" has been erased, so that is a great improvement, and this song actually has a bit of bump to it, so I know that there was some work done to at least a few tracks.  Perhaps it is a problem of limitations from the original source, but I have heard better remasters from far worse source tapes than those that I know are available from Tryx, so I come away feeling like this was a bit of a rushed or budgetarily-restricted effort on the part of Demon Doll.

All in all, this is a great introduction to the band for fans of the glam scene of the Sunset Strip.  It is really nice to hear some of these songs, especially "Sugar Sugar" and "Cross My Heart" at least somewhat cleaned up from the demo recordings I had already tracked down.  It's also cool that guitar player Roxy Leveaux officially endorsed the project, adding still a bit more authenticity to the project despite the fact that all of these songs are at least 20 years old.  Here's hoping we get a chance to hear the rest of the catalog, with an even better remastering job done, in the not-too-distant future.

Rating:  Due to the less-than-stellar remastering job, I can't give this more than a rocking 6.5, but these songs are a glamsters dream and serious glam fans should track this disc down before it sells out.