MANAFEST "This Is Not The End" 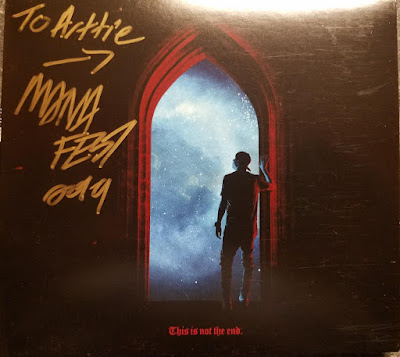 Christian rap/rock artist Manafest returns with his first album of new material since 2017's surprisingly good Stones record.  The former skateboarder from Ontario, Canada is quite a dynamic force in both the Christian rock and rap scenes, with ten studio albums, a remix album, and a live record to his credit, multiple Dove Award nominations, Juno and GMA Canada Covenant Awards and nominations, as well as several charting singles both on the Christian rock and Christian rap charts.  In 2015, Manafest decided to leave his label, BEC Recordings, and enter the independent music scene, where he has found possibly his greatest success as an artist.

For the life of me, I cannot find any credit for who played what instruments on this record, and that is a shame because there is some really good guitar work in several spots here.  I have to wonder if Adam Messinger is not responsible for at least some of the music here, as he has performed a lot of the instrumentation for Manafest in the past, although on Stones a lot of guest musicians were brought in.  What I can tell you is that Manafest again turns to his friends for assistance on some of the better tracks on the record, with Thousand Foot Krutch's Trevor Mcnevan, a frequent contributor to the Manafest catalog, again lending a hand, as does the album's producer, Doug Weier.  Mcnevan's vocals are easy to pick out on the soulful chorus section of the quasi-ballad, "Come Back Home".  Programmed drums and speedy, rhythmic raps are in full force here over a bed of electric piano, but as a package, the track works well.

Speaking of Mcnevan, he also lends his pen to the writing of the three hardest rockers on the album, the excellent "Grenades", the gritty "Born For This", and the punchy "Kamikaze".  All three tracks feature some solid guitar work, with "Grenades" really hitting hard on the rhythm guitars and what sound like live (rather than programmed) drums.  A song about letting go of grudges, "Grenades" combines some atmospheric elements under the verse sections, with the pre-chorus and chorus portions both supported by those edgy guitars I mentioned.  "Born For This" is another rocking tune that gets a solid boost from the cool vocal contributions of Max Manon.  I have no idea who the guy is, but his voice really adds to the chorus sections of this song with a vocal style that is both gritty and soulful at the same time.  And "Kamikaze" is another solid modern rock song that finds Manafest using a bit more of a singing vocal style for parts of the verses and then on the pre-chorus sections, with a more aggressive style utilized on the verses.  There is still some snappy, rapid fire rapping going on in parts of the verses, so Greenwood really showcases the full range of his vocal styles all in one track.

Mcnevan also co-wrote the very emotional and poignant anti-abortion song, "Plan For Me".  The first verse of the song finds the father of an aborted child addressing his son or daughter, explaining the pain and regret that he has been living with since he and the child's mother decided to terminate their pregnancy.  The second verse is a response from the child trying to console her father (we learn the child would have been a "baby girl...[with] brown eyes and golden curls"), telling him that she forgives him, still loves him, and that he needs to let go of his grief and pain.  Then, in a spoken interlude before the final run through the gut-wrenching chorus (more on that in a minute), the child tells her father that he can't "let the past shape your future" and that "God's already forgiven you, if you can just find the strength [to] forgive yourself", concluding "I love ya and I'll see you up here soon".  The chorus features the hauntingly beautiful voice of "Mrs. Manafest", as Greenwood's wife, Melanie, is heard on an album for the first time.  The quality of her voice only adds to the powerful message of the chorus, which echoes:

While I'm sure there are a lot of pro-choice people who will dismiss the song's message as being meaningless and just anti-women's-rights rubbish, there will also likely be a segment of the pro-life crowd who crow that the song's message is too forgiving of the father (and likely mother) and their decision to abort their child.  Both camps miss the point, in my estimation, as this is a song about pain, grief, heartache, loss, forgiveness, and hope for redemption at some point, along with a reconciliation in Heaven for the shattered family.  Don't quickly look past the point in the chorus that finds the child stating she was never unplanned, at least by God.  I am not ashamed to admit that this song has brought me to tears on more than one occasion and moves me every time I hear it.  Tuly a powerful message here, but sadly one that I think people on both sides of the abortion debate will dismiss.  Oh...and the child singing, "You are my sunshine, my only sunshine..." at the end is a nice gut-punch ending.  I have to wonder if this was performed by Greenwood's daughter, London, although I have no idea how old she is and there is no written indication that this is her.

The other stand-out tracks for me are the album's opener and title track (also co-written by Mcnevan) and the closing track, "I Made It", which are both positive, uplifting rock tracks with catchy, sing-along choruses that both of my kids picked up on almost immediately.

Not everything here really resonates with me.  "All Time High" feels like a Drake-styled track, musically, with Greenwood providing the vocals.  The music is all programmed and electronic, and the song is just too...synthetic...for me.  "Wake Me Up", while featuring some melodic guitar lines, is just too poppy and saccharine with it's electronically enhanced "Whoa-oh-oh's" and programmed handclaps.  And "Insomnia" sounds like the darker musical echo of "Wake Me Up", again featuing some electronically embelished "whoa-oh-ohs" and electronic drums, but with a much more down-tempo pace and darker tone...not to mention the desire to go to sleep rather than the call to be awakend.  Intentional?  No idea, but it is an interesting point/counterpoint, even if the music isn't really my style.

Ryan Clark of Demon Hunter is credited in the liner notes for "the sick artwork", which I assume refers to the cover art and the artwork on the 2-sided, 9 panel insert.  The digipack artwork features  red and black enhanced photo of Greenwood, along with a stylized "M" on the interior.

As with Stones, I am not going to say I absolutely love every aspect of this record, because the electronic hip hop that is employed on tracks like "All Time High" and "Insomnia" is just not my thing.  But I would be lying if I said I don't really like a lot of this record, accepting it for the style of modern rap/rock hybrid that it is.  I realize not everyone will be able to musically tune into what Manafest is doing here, and that's okay.  But for those that are open to various styles of modern rock, especially younger audiences that are accustomed to genre-blurring artists, Manafest is likely to strike a musical chord.  My 12 year old LOVES Manafest, and my 7 year old regularly sings along to this album already, and both of them are also fans of MUCH harder/heavier music than is supplied here, so obviously Greenwood is doing something right.

Rating:  As with Stones, I would crank this to a solid 7, again with the understanding that not everyone will agree, especially those of the "metal or die!" ilk.  To each their own!

Back To Reviews Index
Posted by arttieTHE1manparty at 8:32 PM