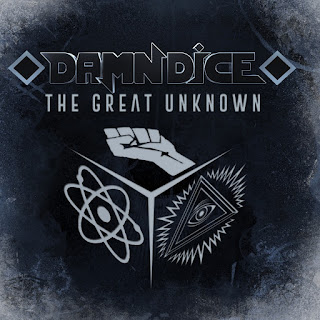 Damn Dice return with their first full-length album, The Great Unknown, after having gone nearly three years since the release of their debut EP, Wild N Ready in 2013.  The line-up for this London-based band remains intact, although their sound is beefed up a bit, given a heavier, more bottom-ended thump, and grittier production.  The songs themselves are more aggressive, feeling somewhat akin to heavier Skid Row in their approach, although the vocals are NOTHING like those delivered by Sebastian Bach.  In fact, at times, Alex sounds more like Nitro's Jim Gillette than he does anyone, singing in something of a forced falsetto for about 1/3 of the record, although he never approaches glass-shattering range with his screams.  In fact, it is these moments that actually cause me to mark this album down a bit because the vocals are almost too much to take in spots.  Maybe it's a London thing, as the Darkness is another great example of a band that I would really love to get into, but the vocals just destroy the band.  Here it isn't quite as bad because the other 2/3 of the time, Alex uses a solid, controlled, and relatively strong mid-range tenor that suits both him and the rest of the music very well.  My one hope for the band is that they stick with this style of vocals for their next album and leave the falsetto behind.

Musically, the band is very tight on this record, with solid, aggressive riffing and confident, if not flashy, solo work from Wallis on guitars.  A perfect example is the excellent solo on one of the best tracks here, "Down", which finds him really delivering on a solid 80's-inspired run, but the mix keeps it from being so out-front that it doesn't detract from the rest of the song.  The bass, as previously mentioned, is definitely a solid part of the mix on all of the tracks here, and the drumming is creative, especially for this style of music, keeping the band on a solid tempo at all times.  I really don't have much in the way of complaints about this band musically, as all are competent musicians that handle their roles well.

Standout tracks are hard to pick, because there is so much good stuff here, and even the iffy moments don't really sink all the way to the bottom to "bad" territory.  As I stated above, I think "Down" is a very good song, and a prime example of the songwriting and musicianship of the band.  "The Way To Go" is another really good, hard driving song with solid guitar work, nice backing vocals, and only a few spots where Alex breaks into that annoying falsetto.  "Take The Fight" really grabs my attention because of the great use of the gang-shouted vocals contrasting with Alex's falsetto...which actually works on this song and doesn't grate on my eardrums for some reason.  "Bang Your Head" is the fastest track here and is just blistering hard rock n roll with sharp drums, some aggressive bass work, and really nice guitar work, all intermixed with some gang-shouted vocals.  Again, a bit too much falsetto from Alex, but yet again I manage to overlook that on this number.  Album opener, "Power" is a nice, hard rocking track as well, and "Rock (Like You Mean It)" is just a flat-out ball-busting number that lays waste to pretty much everything else on this album...or a LOT of albums of this style to come out in the last few years.  I LOVE this song and have moved it onto one of my gym mixes as it has a great tempo, a thumping bass and drum line, gang shouted backing vocals, NO falsetto voices, and excellent guitar work.  In fact, as I look back on this last section, it is safe to say that Damn Dice is at their absolute best when they are grinding though their heavier, punchier material, not trying to be anything that they are not, and just smacking you in the mouth with aggressive hard rock.  That being said, "Words" is a GREAT power ballad, and album closer, "Home" is also a kick-ass track that finds the band effortlessly moving from softer, acoustic based balladry to electrified, crunchy rocker, all within the same track.  Alex also really gets a chance to showcase his more emotive side vocally, which is a good thing.

As you may have noted if you paid close attention, the best stuff, by and large, for me is at the end of the album, with the opener and a couple of middle tracks comprising the really good stuff here.  I don't know if that was by design, but it reminds me of the approach a lot of rock bands took back when vinyl ruled the day...front loading with a great song on Side A, finishing Side A with a solid rocker, then starting Side B with another good track before closing out with two or sometimes three really solid songs, and burying the other, lesser tracks, somewhere in the middle of each side.  If this CD was put onto vinyl and the A/B split was between tracks 5 and 6, this would be an almost perfect example of an album layout, in my opinion.

If I had any complaints, other than the falsetto in spots, I would say the album is two or three songs too long. To remedy that, one of two things could be done.  The tracks from the EP could have been left off, but you would lose three of the best songs here, as "Down", "Bang Your Head" and "Take The Fight" are carryovers.  If I HAD to drop one of these, it would be "Down", but that's a tough call. The other option would be to drop "What Now?" and "Driven" which are the only two so-so songs for me.  Don't mistake this for me saying they suck or anything, because that is not my point.  They just aren't all that memorable for me at all and lack the real hook that keeps a song in your head for long periods of time.

My only other complaint is this band LOVES their intros.  Sound effects preface several of these songs and waste the listener's time as these intros really don't add anything but length to the tracks.  Sure, they allow for some separation between all the up-tempo numbers here, but they are unnecessary in my opinion.  Of course, anyone who regularly reads this site knows of my disdain for intros and outros, so this minor gripe shouldn't shock anyone.

Overall, Damn Dice have a winner on their hands with The Great Unknown, which comes out on August 24. Hit the band's website at www.damndice.com to pre-order the record, snag the previous EP and other merch, and to check out a few of the tracks from this album.  For my money, Damn Dice is one of the truly good hard rock bands coming out of the European scene, which is saying quite a bit considering the talent they are competing with.