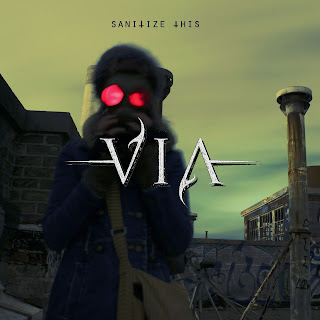 VIA is a relatively new band, having only been formed in Minnesota in 2013, yet they have already garnered themselves a decent internet following and a record deal.  Having never heard anything from these guys, I had no idea what to expect, although I was fairly sure we would be treated to some Octane-friendly modern hard rock.

To my ears, VIA has far more in common with one of my favorite 90's hard alternative bands, LIVE, than with anything currently garnering airplay.  J's vocals have the same edge that LIVE frontman Ed Kowalczyk used to such great effect, especially on that band's first three or four albums, and the off-kilter rhythms, fuzzed-up guitars and overall tone only serve to add to this comparison.  I wouldn't be at all surprised to learn that the band incorporates a few songs from Throwing Copper or Secret Samhadi into their set, in fact.

Things start off rather aggressively with the first two tracks, which are both hard rockers with an alternative bent to them.  While neither "Why Do You Play God?" nor "Uncle Sam" are overly memorable, they both showcase a tight band, especially in the rhythm section of Ben and Sam, and a penchant for discordant guitars.

"The Color Snow" is probably the most interesting track here, with it's bizarre stop-start rhythms and the previously mentioned phrasing and vocal stylings that are so reminiscent of LIVE for me.  "Shroommates" is another solid, yet odd, song, even briefly injecting a humorous circus march into the mix, to help move the song forward.  But, that odd twist aside, there is nothing particularly memorable about the song.

"Red Room" is just so repetitive and lacking in any kind of solo, breakdown, or unique instrumentation, that it resembles audio oatmeal to me:  bland, grey, and tasteless.  Sure the band picks up the pace a bit for the last half of the track, and there is an angry edge to J's vocals here, but it's just not moving for me at all.

"Closets" steps things back up a bit, and finds J in full-on Kowalczyk mode as far as his phrasing and snarl goes, and it works very well here.  If forced to pick, I think that "Closets" would probably be my favorite song here.  A rather dark song, there are some interesting lyrical phrasings and turns that catch your attention, as well as a musical urgency not found on several other tracks.

"...To Those Of You With A Guilty Conscience" is another fairly color-by-numbers 90's alt-rock number that doesn't find the band taking any musical chances.

"Come Find Me" closes things out on something of a high note, as the band alters their approach slightly, utilizing quieter guitars, more sparse musical segments, and some big, thundering drums to let the song develop its own identity.  Couple with J's typically angst-ridden, emotive vocals, and things start looking up for VIA at precisely the same time the album comes to an end.

Every time I played this record, both prior to and during my writing of the review, I felt like I was back in my college apartment, trying to get my homework done, while the college radio station chewed away at my ears with all the angst-ridden alt rock and grunge of the time.  VIA really does have that 90's sound down pat, no question.  Whether that is their intent or not may be a different story, as there really isn't much of a market for that style of music now.  And maybe that's okay.  Maybe VIA is just being who they are and playing what they love.  If that's the case, that's great, and I applaud them for their desire to play what they love and to wear their influences on their musical sleeves.  Now, they just need to inject their OWN personality into the mix, and maybe they will have something more than a nostalgia trip in store for their listening base.  As it stands, I feel like the band is playing things too safely for rock n roll, if you know what I mean.  It is clear these guys have musical talent, but it feels like they are just trying so hard to make an impression that as a result the music suffers at times from a generic lack of personality.  Given more time and experience...and experimentation with styles and sounds...perhaps VIA will find a niche in the current hard rock/alternative market.  Here's hoping for better things in the future from this young, upstart act.

I believe this is to be a digital-only release, at least initially, and will be available through Pavement Entertainment on August 21, 2015.