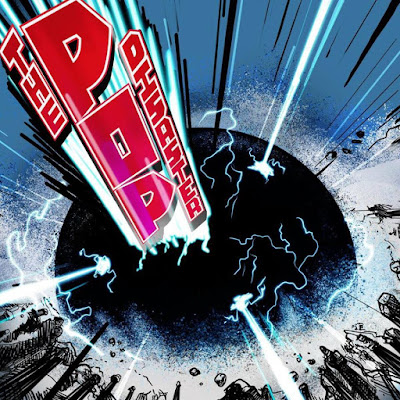 I'll admit to it; I am ALWAYS a bit wary of lead singers that leave their band behind and set off into solo album land.  I mean, this site is littered with singers who have stepped away from the band they are associated with...sometimes by choice, sometimes not...and have released solo efforts with varying degrees of success.  For every Ron Keel (Keel), there's an Austin John (Hinder), for each Tom Kiefer (Cinderella), there is also a Steven Tyler (Aerosmith).  It's a total roll of the dice, really.  Do I get Donnie Vie (Enuff Z'Nuff) or do I get Chip Z'Nuff (Enuff Z'Nuff)?  As I said before, I was skeptical.

Turns out, I had no reason to fret here.  Luke Easter more than successfully surgically excises himself from his position as the twenty-plus year frontman for prog/thrash legends, Tourniquet, and seemingly effortlessly transplants himself into a band of friends willing to allow him to explore the music that is more in line with where he has stated his heart lies.  No, there is no metal to be found on The Pop Disaster...and I mean NONE AT ALL...but there is plenty of expertly crafted, hook-laden rock that ranges from the poppier edges to the harder-yet-melodic fringes of the genre.

Enlisting some pals from such well-known Christian rock and metal bands as Guardian (Bach), Disciple (Prince), Demon Hunter (Sprinkle), and Stryper (Gaines), as well as his longtime friend, Kanoho, Easter finds himself able to express his personal musical vision, rather than the collective vision of a band.  Additionally, Easter changes his vocal approach to great degree and effect on this ELP (too long for an EP, too short for an LP...), sounding a bit like Sebastian Bach on the album's opener, "Life Goes On", while regularly utilizing a more Mike Tramp-ish style for most of the record.  To say I was surprised, and pleasantly so, would be an understatement.

The album starts off with the previously mentioned "Life Goes On", which intros with a catchy riff from Mr. Prince, and a solid hard rock rhythm driven by Sprinkle and Gaines.  Again, I was pretty surprised by the style and sound of the track when it kicks off, but not nearly as surprised as I was when I first heard Easter's edgy-yet-melodic tenor slide into the first chorus.  As I said above, his approach here is very reminiscent of Sebastian Bach here, although the performance and production is a bit poppier than anything Bach has done with Skids or as a solo artist.  The last song written for this album, "Life Goes On" is a catchy, upbeat tune with a tasty little guitar solo before the final chorus, and is one of those songs that I just seem to keep returning to time and time again.

"How To Die Alone And Broken" follows up with a fun, snarky attitude delivered by that raspy-Bach-esque vocal style atop a pop-punk rhythm that finds Sprinkle and bassist, Bach, thumping away from start to finish on easily the fastest song on the release.  I used the word "snarky" to describe the attitude of this song, which Easter describes as being about people that "choose not to be good people.  They take their loved ones for granted, they mistreat and abuse people, and eventually they end up bitter and lonely."  I think this is perfectly summed up in the excellent lyrical approach used here, with such humorous-yet-dead-on passages as:
"If I came back in a million years, Chances are you'd still be sitting here, Collecting thoughts and crafting clever speeches, Ready to pontificate at anyone who'll lend a willing ear"...

"Reality is not your strong suit, You think that if you say so, the sun won't rise.  The ones you're supposed to love the most, You turned into the victims of your self-serving lies."

"Sideways" slows things down quite a bit, utilizing Kanoho's acoustic guitar as the foundation for this mid-tempo number that finds Easter removing a bit of the snarl from his voice and drifting more into Tramp territory, and doing it exceptionally well.  I keep going back and forth on which song is my favorite on this effort, and "Sideways" is always in the top two or three.  Poignantly touching on the subject of a broken relationship, this track also finds Prince delivering an great 80s-styled guitar solo that would have felt right at home on just about any melodic rock album of the era.  This is strong songwriting at its best, incorporating both electric and acoustic elements, powerful vocals, and great production to excellent effect.  If I said this track wasn't my favorite today, ask me again tomorrow, because it very likely would be then.  I just love this song.

"As Damaged As You Are" speeds things right back up in fine fashion.  Again, far poppier than anything that Easter has ever been associated with in the past, this is a shining example of what happens when an artist finds his groove.  Confidence oozes from Easter's higher-end tenor vocals on this track, and once again, Prince delivers another retro-styled solo that is almost as far-removed from his work with Disciple as Easter's vocals are removed from Tourniquet...but it works so amazingly well!  This is the sound of a group of guys having fun in the studio, and it is exactly what I feel has been missing from the last handful of Tourniquet records, in my opinion:  fun.

"After I'm Gone" is another guitar-driven rocker, more in an 80s radio rock vein than anything else, which is pretty cool to hear, honestly, as the song just is what it is.  No pretension clouds the song at all, its just a fun, top rolled back rock song with a cool guitar riff and a straight-forward rock rhythm.  Vocally, Easter retains that slightly raspy mid-to-upper range tenor, and echoes of Bon Jovi can be heard all across the track.  While not my favorite song, perhaps "After I'm Gone" is the one song that best represents where the project is as a whole, sitting pretty squarely in the middle of the styles and tempos of everything here.

"Misspent" and "Sleep" are songs that Easter has carried with him for several years that finally get to see the light of day on The Pop Disaster.  "Misspent" could very easily be a later-era White Lion song and is another contender for song-of-the-album.  Much like "Sideways", "Misspent" features a lot of acoustic guitar, but the pace is definitely more uptempo than the one "Sideways" utilizes.  A wistful song about youth, "Misspent" has the best lyrics of the record, for my money, with the line "I really haven't got a clue about where the time went, There are no ready answers, but I hope that it wasn't misspent" being one that I think all of us can relate to as we move along in life, hoping that we did all we could and lived with no regrets.

"Sleep" is the most stark departure from Easter's previous gig, as the big, sweeping ballad incorporates both violin and cello in place of drums and bass...and works to great effect!  Demoed originally as a full-band mid-tempo rocker, the version of "Sleep" that finds its way onto The Pop Disaster is a thoughtful piece about putting the past behind, allowing yourself to breathe, and finding peace, and hopefully, a bit of rest...a bit of sleep.  It is a marvelous close to an overall pleasantly surprising effort.

If you go into this project expecting a bunch of medical terminology and technically over-the-top progressive thrash like early Tourniquet, or punchy, metallic crunch like later-era material from the band, you are going to be sorely disappointed.  As I stated previously, this is NOT a metal album, so if that is what you are after, steer clear.  But if you are open-minded and willing to go where Luke wants to take you, I can pretty much guarantee that The Pop Disaster is going to show you something you are going to want to return for again and again.  Do not be surprised to see this ELP in Best of 2018 lists here at Glitter2Gutter, as I fully believe it has a chance to be there come December.

If you have a few minutes, jump over and check out an interview I did with Luke a few weeks ago, and get even more insight into the songs, the album, where he's coming from, and where he wants to go RIGHT HERE.

And the winner for most incorrectly titled album of 2018?  No question, The Pop Disaster from Luke Easter has to be RIGHT up there, as there is absolutely nothing disastrous about this effort.  A+ songwriting, a name-dropping backing band, and excellent production surround Easter on his debut solo effort, giving the former metal barker an amazing platform on which to showcase where his musical heart lies.  Here's to more...much more...from the talented vocalist and his friends!

Rating:  Definitely a cranker!  Twist 'er up to 9!

Back To Reviews Index
Posted by arttieTHE1manparty at 9:30 PM