IN THE VERSE "Hostage" 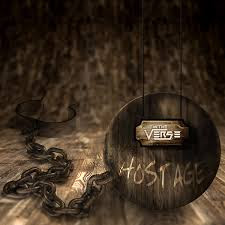 As readers of G2G know, I don't normally review singles, but I do make exceptions from time to time, especially if the single is exceptionally good...or exceptionally bad.

This one is the former.

In The Verse is a three man Christian hard rock project out of Wisconsin that has already managed to garner a good deal of attention, getting airplay on Sirius/XM's now defunct Christian hard rock/metal show, The Message Amped, as well as on numerous streaming and terrestrial radio stations across the country...all despite being together for just over a year, not having a drummer or bass player, and only having two songs available to the general public.  Not bad...not bad, at all!

"Disaster" kicks off this 2-song release with a nice piano intro from Certius, before some programmed elements and fuzzed-up guitars come buzzing into the track, along with the stop-start-stop-start styled production used to such great effect by bands like Skillet, Red, and Disciple (all of whom are listed as influences of the band).  Hanson's chug-chug-chug guitar style fits this driving modern rock number especially well, and Hulbert's vocals are easily understood over the bed of atmospheric electronic elements in the background.  Harsher, screamed backing vocals during the chorus also serve to really enhance Hulbert's more melodic approach throughout the rest of the track.

"Hostage" is a slightly more straight-up hard rock number, relying less on the electronic ambient backing element and more on straight forward hard guitars, albeit with modern production altering the tones somewhat.  Big drums kick the song into gear before the snarling guitar lines take over.  Once again, the song is uptempo and aggressive, with hard-charging rhythm guitars and pounding...and programmed...drums, with Hulbert's vocals easily understood and ringing with clarity above the fray.  A straight-out-of-the-70s-styled KEYBOARD solo pours forth at about the 2:20 mark, which adds a completely different element to this track.  Its an interesting curve ball and shows the band is willing to be experimental with their sound while retaining the modern hard rock approach that the guys obviously gravitate toward.

The packaging, while simple, is complete, with full lyrical listings for both songs, pictures of the three members of the band, and a thank-you list.  My copy is autographed, as well, since I ordered straight from the band.

I have a STRONG suspicion we are going to be hearing a lot more from this band in the very near future, and I am excited to hear what they come up with next.  In The Verse is currently running a GoFundMe campaign to help them put together and release a full-length album in the near future, and last I checked they had managed to secure enough funding for a long 7-track EP, but were continuing to push forward to try to fund another 3 or 4 songs.  If you are interested in the project, the GoFundMe page is here.

Oh!  And it appears the new effort will have a full-time drummer as a member of In The Verse, as photos on the GoFundMe page, as well as listings on Facebook, show Devin Shumski as the band's drummer now.  Things are definitely looking up...

Rating:  Again, I don't rate singles, but I will say that I am very impressed with what I hear, and I have actually purchased the project on CD, as well as digitally...AND funded the new project.  I guess you could say I am a fan and a believer in In The Verse!

Posted by arttieTHE1manparty at 2:20 PM