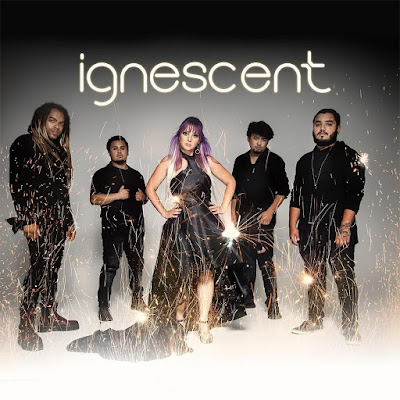 Ignescent means "emitting sparks of fire when struck".  Think flint and steel.  If you are still in question, check out the picture above.  Notice the sparks?  There you go!  Now, Ignescent the band is trying to spark a fire of their own in the Christian rock scene with the release of this two track single, "Into The Night/Demons 777".  Combining aggressive guitars and big rhythms with pop songwriting sensibilities and catchy hooks, this Chicago band has refined their sound and style, pulling in influential elements of bands such as Evancescence, Flyleaf, and Paramore, with bits and pieces of Fireflight, particularly in the vocals of Benson, while creating a sound that is all their own.

The first single, "Into The Night" starts off with some programmed elements introing an aggressive percussion section from Calix, and a rumbling bass line courtesy of Sebastian, when a furious rhythm guitar line grinds its way into the track, setting the stage for the smooth, soaring vocals of Benson kick in.  Elion's leads run up and down the verse sections while Sepulveda's rhythm guitars saw their way through the track.  The keys/programming here are uncredited, but they serve as a big part of this rapid-fire, uptempo track.  As I stated before, there is a definite pop sensibility to the way the vocals are produced and layered in the chorus section, but the rock is unrelenting throughout this song about the redeeming power of Christ's love, even when we are at our worst and fighting our own darkness.  And while the whole track works extremely well, it is truly driven by the vocal approach of Benson...and punctuated by the crushing kit work from Calix, who really brings the thunder in this track.  The song has done huge things for the band, and if you somehow missed it, you would do yourself a huge favor to seek it out.  Check out the video below.

The other track here is the title track to the upcoming 2020 CD, Demons 777.  Equally hard-hitting, with edgy, aggressive rhythm guitar lines, the song is a bit darker in its sound.  Even the vocal approach from Benson is a bit more angst-driven, with less high-end soaring and more use of her lower-range.  Don't take this to mean that she plays it safe or that she never unleashes, because the is not the case.  However, there is a usage of effects on her vocals, particularly leading into the second verse section, that ups the modern rock feel here.  Less pop-oriented than "Into The Night", the buzzsaw rhythm guitars are a bit more prominent here, and the overall feel of the song is more aggressive, even if it isn't quite as fast, tempo-wise.  Currently climbing the Christian rock charts, "Demons 777" is a compelling piece of modern hard rock that I hope is representative of the overall sound of the record.

Produced by Cameron Pierce Mizell, who has worked with bands such as Memphis May Fire and Sleeping With Sirens, these tracks from Ignescent show not only a band that is on the verge of breaking through on a national level, but also a band that knows who they are and what they are trying to do musically.  Focused, energetic, and accessible while remaining faith-driven in their purpose, Ignescent is poised for great things if the rest of Demons 777 sounds anything like the two tracks here!  You can follow the band on Facebook and Twitter at @ignescentmusic as well as their website, www.ignescentmusic.com

Rating:  I don't normally rate singles, but the music here is definitely worth seeking out!

Back To Reviews Index
Posted by arttieTHE1manparty at 6:33 PM