DEFIANT "The Rent In Hell Is Free" 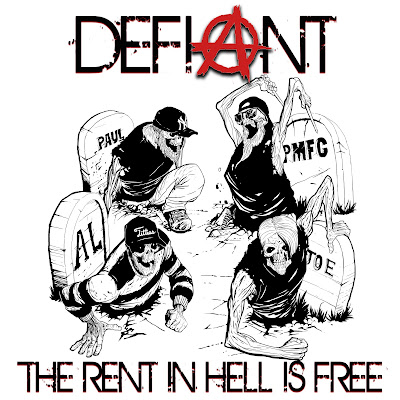 (c) 2021 Curtain Call Records
Albert Halterman--Lead Vocals, Guitars
Joe Defiant--Guitars
Paul Barlowski--Bass
Paul Cochran--Drums
Additional Musicians
Ace Von Johnson--Guitars on "Viva La Revolution"
Jim Taylor--Vocals on "Unmarked Grave"
Richard Reilly--Vocals on "Viva La Revolution"
Hailing from Pennsylvania, Defiant have released their second EP, The Rent In Hell Is Free, blending a scathing metallic approach with some undeniable punk influences that keep the album churning from start to finish.  I wasn't really sure what to expect when I saw that Ace Von Johnson of LA Guns/Faster Pussycat notoriety was on board as a guest musician, but what I got was definitely not Hollywood sleaze!  Instead, what the listener is treated to is more of a traditional metal style, with some punk leanings, featuring harsh (but not growling) vocals, punishing rhythms, and solid song structures.  This is apparent right from the get-go, as the band lays out their own take on a history lesson in "Crusades".  A somewhat up-tempo, angry romp, "Crusades" is a prime example of where this band is coming from stylistically, with Halterman's snarled vocals grating across an aggressive rhythm guitar and hard-hitting drums.  The lead guitar work here is more along the traditional metal approach and not the guitar god axe wizardry of the hair metal crowd, and it fits the style perfectly.  This approach is echoed on the other end of the EP, as well, with lead single and video, "Free For A Price", which combines a catchy lead hook that is repeated in each verse section and more of Halterman's aggro-vocals.  Check out the video below for an excellent idea of what to expect from Defiant.
Other strong performances on the EP can be found in "Knuckleduster", which despite its White Zombie-sounding title, is just punch-you-in-the-face mid-tempo aggression layered over a punishing drum line and churning rhythm guitars.  "Viva La Revolution" is a punked-up affair, and it makes sense that Ace Von Johnson would lend his guitar talents to this track, as it is definitely more his style with a sleazy guitar solo.  I'm not positive, but I think the co-lead vocals are handled by Richard Reilly of The Victims/The Bo Deadlys, and his vocals stand as a stark contrast to the coarse snarls and barks offered up by Halterman.
I also want to draw attention to the doomy dirge, "Unmarked Grave", which showcases a completely different side of the band.  While not my favorite track, and one that could really benefit from a bigger production budget, "Unmarked Grave" shows a band that is not afraid to roll the dice and experiment with different styles and sounds.  The verses are extremely stark and somber, with guest vocals from Jim Taylor (Henne) handling the cleaner lines before the band launches itself headlong into the chorus breaks, with Halterman again taking over the mic.  There are some cool sounds wrung from the lead guitars here, especially on the solo break coming out of the second chorus and before the vocal bridge.
The moody instrumental track, "The Day After" is also pretty interesting and worth checking out, with Barlowski's bass work getting a chance to really stand out.  Short, but placed perfectly as the lead in to "Unmarked Grave", this track gives the listener a chance to catch their breath before "Viva..." and "Free..." mosh things out at the end of the EP.
Keep an eye out for the band on tour, as they have lined up opening slots for such names as Puddle Of Mudd and Messer in the near future, as well as getting themselves on some metal festivals like Metal In The Mountain, all of which are coming up in the month of August.  Check out their Facebook page for more information about tour dates.
Overall, much more "metal" than I was expecting, with the punk stylings being more of a support structure for this EP outside of the sleazy punk romp of "Viva La Revolution".  I'm not sure how much room there is on any type of radio for a band of this style of metallic aggression, but if Defiant can manage to wedge themselves in somewhere, they are surely going to try to bust things open.  Definitely an underground force to be reckoned with for fans of punch-you-in-the-mouth, old school heavy metal mixed with touches of doom and punk.
Rating:  Crank this to a 7!
Back To Reviews Index
Posted by arttieTHE1manparty at 11:18 AM No comments: