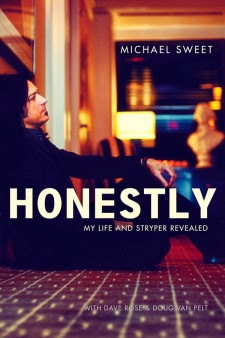 When I heard that Michael Sweet was putting together his autobiography, it was kind of a "FINALLY!" moment for me.  Having been a fan of the Yellow and Black Attack for close to 30 years, I had always hoped to gain some insight into the band other than what can be gleaned from the random facts that are carefully dropped in interviews with magazines.  At the same time, having heard how guarded Michael can be, I always wondered how open and honest he would be.  And, having also heard how aloof and, to some, arrogant Michael can come off, I wondered if I would enjoy reading this book at all.  So, despite my happiness with the book finally coming to life, I have to admit that I was a bit apprehensive when Deep South approached me about reviewing the book.

For starters, let me be clear: I am reviewing a digital copy.  I have no idea if there are any photos included in the actual book because this digital copy has none.  It doesn't even have a back cover, just the front image and nothing else.  I am also not 100% sure the page numbers align perfectly, as I have experienced some differences between digital and print copies in the past.  These are minor issues, I realize, but I like to be as upfront as possible with any review I do.

After sitting down with my Kindle Fire, I have to tell you I had a very hard time stopping once I started reading.  The book doesn't bore the reader to death with a laundry list of things the author did as a child, all the places he lived, all the schools he attended, etc.  I understand that these are important facts that make the artist who they are, but when these kind of details start to take up two, three, or four chapters, you are losing my interest quickly.  Such was not the case with Michael's book.

Some people are going to be very judgmental of Michael Sweet when they read this book, especially as it pertains to his early life.  He readily admits to being rather "un-Christian" in his behavior as a young man, despite professing a strong faith and belief in God and Christianity.  He doesn't hid the fact that his first child was conceived out of wedlock, or the fact that he and  Kyle eloped rather than having some sort of big church ceremony.  He is candid about what can only be described as indifference (at best) or bitterness (at worst) about being suddenly tied down with a wife and child when so many of his contemporaries were out living the wild rock n roll lifestyle.  Michael admits to an episode of infidelity.  He does not shy away from the poor way in which Timothy Gaines original departure from the band was handled.  He also openly discusses the band's internal turmoil, their lack of business savvy, the band more-or-less falling apart at the seams during the Against The Law years (including hanging out in a strip club with some guys from other bands who were a bit shocked to see these Christian rockers drinking in a strip club!).  Others will likely take issue with how quickly Michael fell in love and got married after his first wife died.  And, still others will ask what a Christian is doing fronting a secular band like Boston.  Like I said, a lot of people are likely to cast a LOT of stones at Michael and Stryper if all they do is read the bare bones of the book.

However, for those who really read what Michael is saying in this book, they will find that he is telling you that while he is a Christian, he is not, nor has he ever claimed to be, perfect.  He has struggles and failures, yet he tries to be an example of what Christ can do for others through forgiveness and faith.  Having met the man on two occasions...once purely as a fan and once as a promoter...I can attest to the fact that there are two Michaels in some ways.  There is the accommodating Michael who is a truly nice guy, posing for pictures and shaking hands with as many fans as possible.  But there is that aloof side that cannot be denied when dealing with Michael professionally, and there are occasions when he comes across in this manner in the book as well.  However, having worked with him in a professional capacity, and then seeing this same attitude in print, it is much easier to see that much of this comes from Michael being a perfectionist and, surprisingly, also being a bit on the shy side.  And I get that and can appreciate that fact.  And, to be honest, I'm glad it came out in the book a bit because it added to the "realness" of the book that I think is lacking in many autobiographies.

Don't expect a name-dropping tell-all, because that is not what you are going to get with Honestly.  While he is very candid about his dealings with management, his band, and his solo career, his personal life is largely off-limits other than what he chooses to share about his love for his children, losing his wife to cancer, and finding love again when he wasn't even looking.  Michael covers his struggles with his "brothers in the band" that he acknowledges he doesn't always like, but does always love.  And he openly and honestly admits he sometimes struggles with staying in the band, putting on the yellow and black, and going out and doing the corporate Stryper thing when he might rather be doing his solo material.  The title of the book pretty much sums things up here; whether you like what you are reading or not, you do get the feeling that Michael is being completely honest with the reader.

All in all, this is a very solid, rather easy read that took me about 16 total hours to get through over the course of a couple of days.  It is one of those books that once I started turning pages, I found it hard to find a stopping spot because I wanted to read what happened next.  There are a couple of minor editing errors toward the end of the book, but nothing that is overwhelmingly distracting, and which may also be fixed by the time the print version of the book is released.

Whether you are a fan of the band, the man, or the style of music Stryper or Michael Sweet play, I strongly suggest picking up Honestly: My Life And Stryper Revealed.  I also highly recommend reading with an open mind and open heart...and to sit a good distance from any rocks lest you be one of those readers who too quickly picks up stones to cast at this honest man of God.

Posted by arttieTHE1manparty at 8:37 PM