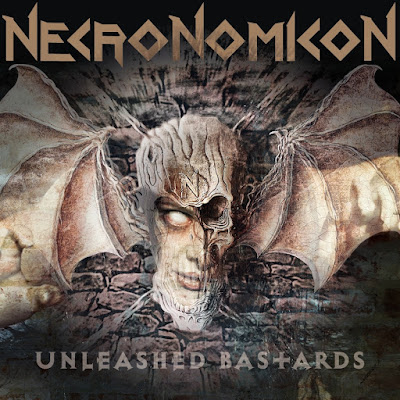 There was a time where I was into anything and everything thrash.  I had grown weary with the cookie-cutter hair bands and was looking for something more aggressive...a lot more aggressive, especially for when I was in the gym.  Sure, I knew of Metallica, Anthrax, Slayer (the latter of whom I can't stand...AT ALL), and Megadeth, and I had dabbled in Overkill, Testament and Metal Church (the latter two being personal favorites for me, even to this day...)...as well as Christian thrashers Deliverance (another fave), Vengeance, Sacrament, Tourniquet, etc....but I was always on the lookout for more.  And, as with my previous obsession with finding bands that few had heard of, I found myself seeking out foreign bands to fill my new thrash passion.  After doing some trading with a couple of metal friends overseas, I was introduced to the semi-underground German thrash band, Necronomicon.  I say "semi-underground" because if you were European...and especially if you were German...you knew full well who Necronomicon was.  But here, in the States, the band was definitely not a part of the known thrash scene, and I was stoked with my discovery!

Well, here it is, 2018, and thrash continues to survive...even somewhat thrive, in places...and Necronomicon is still alive, as well.  I had kind of lost track of the band, and didn't realize that they had released a couple of records in the 2000s, and with only vocalist Freddy still around from the original version of the band, I was curisous if the band still retains the high-energy speed and aggression of the band I came to know in the late-80s.  The answer, much to my delight, is a resounding yes, but with the added bonus of hints of power metal being incorporated into the mix in several tracks!

"Burn And Fall" kicks the album off in fine form, with heavy drums and chugging rhythm guitars, reminding me a lot of the more power thrash approach utilized by Metal Church, before they break out into a high-speed, aggressive pattern that is more reminiscent of bands such as Exodus or fellow Germans, Destruction.

People seeking pure speed don't have to wait long, as the next two tracks, "Leave The Lights On" and "Total Rejection" are absolutely blistering in their pace and approach, from the insanely fast drumming to the over-the-top fret-melting of the rhythm guitars, especially on "Leave The Lights On", which is absolutely fantastic!  Marco's fingers have to be nothing but leather-thick callouses with the way he abuses his bass, and the lead solo on "...Lights" is a screaming joy to behold.  "Total Rejection" doesn't slow down or let up, either, although there is a bit more of a melodic approach in places on this track, again reminding me of Metal Church or some of Testament's 80s output.

"Malevolent" slides right out of "Total Rejection" and takes on a decidedly slower, more melodic style, again very much in that American power thrash style of Metal Church, which is just brilliant!  Thick, heavy, dark, aggressive..."Malevolent" is a six minute long slab of some of the best metal of this style I have heard in a couple of years, at least.  Definitely the song of the album for me, and that is saying quite a bit, because there is so much thrashy goodness here!

"We Did We Do" has a cool differentiation between the break-neck riffing of the verses and the slower, more melodic approach of the chorus, and is a lot of fun to listen to.  "My Name Is Vengeance" speeds things back up for its entirety, with "Imperial Hunger" jumping right back to what "We Did We Do" does so well, alternating seizure-inducing speed with "Creeping Death" bridge-styled chorus sections.  Dizzyingly fast solos rip through each of these slabs of molten metal, as Freddy grates his raspy, menacing vocals across every verse and every chorus, supported by some surprisingly strong backing vocals from Mike and Marco.

"My Name Is Vengeance" and the quasi-title track, "Unleashed" are both high speed numbers, with "Unleashed" sounding a bit like what Accept was doing when many people claim that band was starting what we now know as thrash, as it combines elements of straight up heavy metal with Euro-thrash.

"Forbid Me From Living" is a darker, heavier track that features a 50 second long  music box and piano intro that is battered and bruised by heavy drums and melodic-yet-crunchy guitars that carry on for another full minute before Freddy's vocals even enter the fray.  This is a musical stretch by this band that not a lot of other thrashers today would likely consider attempting, and the album is the better for it.  Again incorporating so much of what I love about Metal Church...the power thrash approach, the melodic solo, the chunky bass colliding with the drums...Necronomicon prove that there is far more to the thrash scene than just blazing riffage and machine gun drumming.  Excellent stuff here!

"Religion Live Fast" starts off hard and heavy, again utilizing a more classic heavy metal approach to the brief intro before pure adrenaline-fueled speed is unleashed as the verses kick in.  "Personal Enemy"slows things down a bit, again having a definite "Creeping Death" feel to the nearly-minute long lead in, before it melts into something more akin to "Damage, Inc.", as far as speed goes, although "Personal Enemy" has a quirky, off-kilter pattern to the chorus section that sets it apart from pretty much anything else on the record.  The album then comes to a close with "The Nightmare Continues", a high-speed, high-aggression track that has dollops of of 80s-era Overkill ladled generously across chunky pieces of Kreator-esque meat and bone.  Freddy sounds great here, whether he is scraping the rafters with his high-end screams or snarling his way through the verses.

Man, I am fired up, to say the least!  This is probably the best metal record I have listened to since...well, since Testament's Brotherhood Of The Snake or Metal Church's XI...both of which came out over two years ago...or possibly Deliverance's The Subversive Kind!  Fast, furious, fun...Necronomicon have set the bar extremely high for any metal act that follows in 2018, and blasts the last quarter of this year into the first half of next with an absolute sonic feast!  To say I am impressed would be an understatement, and Unleashed Bastards will definitely be in the conversation for album of the year in just a couple of months!

The production is great, the musicality is top-shelf, and the aggression-meets-melody of numerous tracks is pretty much unmatched in any metal album that has crossed my desk or wormed its way into my ears.  If you have any love for thrash at all, forget picking up the last Metallica album you have been hemming and hawing over (and it is a good record, don't get me wrong...), and grab Necronomicon's Unleashed Bastards instead.  If you though Metallica's "Spit Out The Bone" was top-notch thrash, you need to hear "Leave The Lights On"...and that song isn't even the best on this record!

Posted by arttieTHE1manparty at 8:45 PM No comments: