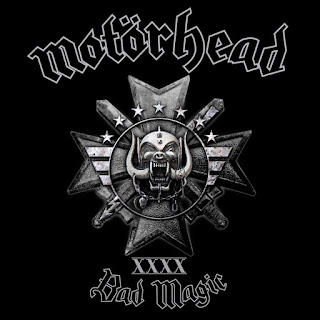 I'm going to contradict myself right from the start, so bear with me.  With Motorhead you are generally either a fan or you aren't.  There really isn't much middle ground.  I think of them very similarly to how I view AC/DC; you know pretty much exactly what you are going to get, as neither band has ever really wavered all that much from their tried and true formula.  Now, about that contradiction.  I AM in that middle ground.  I have never been a fan of the band, but I also never really dipped into the "hate pool" for the band, either.  I own exactly four Motorhead records, so I can't say I am overly well-versed in the band, but most people consider the four in my collection to be among their best:  Ace Of Spades, Orgasmatron, 1916, and Aftershock.  But as a band in general, I just kind of nothinged Motorhead, to be honest.  Their punk-infused style of gruffly snarled and distorted music has never been my cup of tea (please note the British nod there...), but I also never went out of my way to avoid them.  I don't love them...I don't hate them.  Like I said, when it comes to Motorhead, I kind of nothinged them.

Nothing has changed my nothingness of the band with the new album, Bad Magic.

Motorhead is still Motorhead, although in a lot of spots on Bad Magic they don't seem to have quite the angst or fire that they used to.  Now, that can be somewhat expected after 40 years of recording, I would guess, but I always saw Lemmy Killmeister as the tireless, ageless sort of front man that would scoff at exhaustion, laugh at death, and have a drink with the devil himself.  But with his recent health issues, it seems that even the mighty metal godfather has been taken down a notch or two on this recent effort. Perhaps his creative juices weren't flowing as freely on this album, as at 13 tracks it really feels about 6 tracks too long for me.   That is not to say there are no modern classics from this legendary trio, because there are some great moments, especially if you fall into the "Fan Camp" I mentioned earlier.  Even a "nothing fan" like myself found myself snapping my neck furiously to the best tracks here, namely the lead-off track, "Victory Or Die", the crushing "Thunder & Lightning", "Shoot Out All Of Your Lights", which features some excellent drum work from Dee, and even the Rolling Stones cover, "Sympathy For The Devil", although I am sure there are a LOT of Motorhead fans who will cringe at the inclusion of this fairly bizarre choice of covers.  "Fire Storm Hotel" reminds me of the material from one of the two Motorhead albums I actually own, 1916, and "The Devil", which features guest guitar work from none other than Brian May of Queen fame, is another track which I actually found myself hitting repeat on a couple of times due to its unusual catchiness.

But outside of these 6 tracks, I find myself unable to really pull anything else from this record that I would consider memorable, original, or really all that interesting.  I'm not particularly enamored of the acoustic ballad, "Till The End", which I have at least a suspicion that Lemmy wrote about himself and his recent health issues.  It's not terrible, but it's not really interesting, either, at least musically, although the lyrics did grab my attention a bit.  The album's lead single (why is Motorhead releasing "singles"?), "Electricity" isn't particularly electric in its execution, and sounds like so many other Motorhead filler tracks to me.  "Choking On Your Screams", whether intentional or not, sounds like Lemmy actually IS choking throughout much of the vocals, as I have a very difficult time making out what he is saying and it is really distracting for me.  "Evil Eye" just kind of spins for me, doing nothing but making Motorhead-like noise.  Sure, it's fast and furious, but to what end?  The same can be said of "Teach Them How To Bleed"; it's metal as all get-out and the band come across as the speed-freaks they are regularly portrayed as, but after 40 years and 22 albums of material that sounds EXACTLY like this, I'll stick with "Ace Of Spades", "Metropolis", or any of the countless other Motorhead classics that would populate a best of disc if I was inclined to make such a thing.

I'm not here to run down this legendary bands, and let's face it, Motorhead doesn't give a flip about my thoughts on their latest effort.  And that's fine.  They're Motorhead and they do what they do.  I just don't think they do what they do to their best on Bad Magic.  If, by some chance, you are new to this band, I would strongly urge you to go back to their classic album Ace Of Spades, their career pinnacle (in my opinion) in 1916, or even more recent efforts such as Aftershock from just a couple of years ago.  If you are a longtime fan, I would imagine you will end up filing this album somewhere near the 12-15 range as far as its ranking on your personal "Best Motorhead Album Ever" list.  And if you aren't a fan at all, why are you even bothering to pick it up?

As for the handful of people in the hard music world who, like me, "nothing" this band, you'll most likely pluck a few tracks out as good-to-really good tracks, but will not find anything legendary or can't-live-without moments, and probably feel like you've heard a good chunk of this record before on other albums from the past.

If this is that last album that Motorhead ever records, it sadly isn't a particularly triumphant close to a legendary career, but it isn't a full-on whimper, either.  That being said, of all the people...and all the bands...in the metal world, Lemmy and Motorhead are toward the bottom of the list of acts I would choose to count out and leave for dead.

Rating:  Rock this at a middling 5.5...and I may be even nudging that a bit high simply because of the god-like status of the band in the history of metal.

Back To Reviews Index
Posted by arttieTHE1manparty at 8:11 PM No comments: