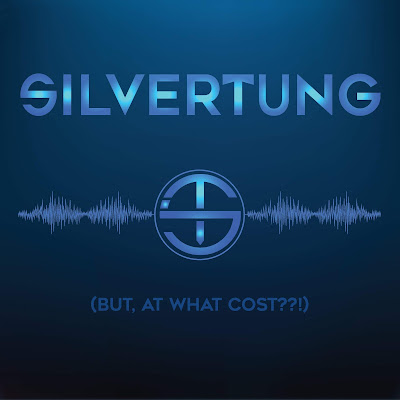 Baltimore, Maryland isn't exactly a hotbed for the hard rock/metal industry, but Silvertung is doing their best to change that impression.  In fact, they have been doing so for some time now, as (But, At What Cost??!) is the band's fifth release in six years, and they have placed at least three tracks in the Billboard Mainstream Rock chart, with "Face The Music" being the one that sticks out in my mind the most.  They've also garnered stage time with some serious heavyweights of the hard music scene, with opening slots for Godsmack, Anthrax, and Shinedown.  And now, with (But, At What Cost??!), the time may be now for this band to step fully into the spotlight.

This maxi-EP (7 songs is pretty long for an EP, but not really enough for a standard LP) kicks off with the hard rocking, "Dodging Bullets".  An aggressive, modern rocker, with tight, swirling guitars and relentless drums, "Dodging Bullets" is the perfect stage-setter for this band, as it includes everything they are about.  Speed's snarling-yet-oddly-melodic vocals rise above the musical fray on this scorching affair that would be perfect for a WWE or UFC promo song!  It sounds to me like there are some keys, or some sort of electronic programming effects here that are uncredited on the promo release I received, but they merely add to the mix here, rather than detract, and the guitar solo from Codey is a rather impressive chunk of work.

"Feeling Inhuman" continues the aggressive groove, again with some electronic elements mixed into the undercurrent of a track that carries a bit of a nu-metal feel, especially in the down-tuned guitars and the way Speed echoes the song's title in the chorus sections near the end.

"World Gone Mad" is a definite contender for best track on the release, with a chugga-chugga guitar riff punctuating the verse sections, and Speed once again adding an element of melody to his otherwise sneering vocals.  Utilizing an interesting vocal bridge/breakdown section rather than a guitar solo, the song carries a bit of a Rob Zombie feel to it, but not so much as to come across as a rip-off of any sort.  Sour's bass is definitely a presence on this track, as well, and the sing-along chorus is just the hook to complete the package.

"Wise Up" is probably the angriest of the songs here, and it works well.  I really felt like I had heard this song before, somewhere, but I think it's just the catchy songwriting approach used on the chorus that feels so familiar.  Speed's snarling, barking vocals, especially on the ultra-aggressive chorus, mixed with the discordant guitars that rip through the section between the last two runs through said chorus, really set this song apart from most of the rest of the album.  I have a feeling this may end up in my new workout mix.

For much of the track, "Black Sunset" is rather reminiscent of a big Godsmack arena rocker, and that's a dang fine thing!  Bursting at the seams with metal-tinged angst, "Black Sunset" is a crushing mass of vocal fury, with a big vocal breakdown, with all sorts of angry barking and fist-punching-the-air, "Hey! Hey! Heys!"  I dig this track, no question.

"You're Fine" is another solid rocker, although it is rather repetitive in the lyrics, and it seems the track is over before it ever really got things going.  Normally that would be a frustrating thing, but it gets us to "Done My Best" that much quicker, and that is a good thing.

The lead single from this release, "Done My Best" has a metallic "swing" feel to it, with some excellent footwork from Danno really helping to set the tone here.  Lots of stop-start guitars in the verse sections, and some nice twin guitar work in the chorus really set this song apart from anything else here, as do the gang-shouted layers on parts of each of the verses. Despite its aggressive vocal delivery, its impossible to miss the big, catchy hook here, and this is a track that I think should see some rapid, upward movement on the Billboard Mainstream Rock chart, as well as on Octane, and open-minded terrestrial radio stations that don't bow down to what the corporate rock gods think people want to hear (do such stations exist?).  I would have loved to hear Codey unleash a blazing solo here, rather than the nu-metallish breakdown that is employed, but this minor deficiency does  nothing to damper my feelings for this song.  Definitely a winner of a track here, and probably my favorite, although both "World Gone Mad" and "Black Sunset" are also big songs for me, as is the blood-pumping crusher, "Wise Up".

Plenty of heavy riffage can be found throughout the album, and the production from Steven Wright (Slipknot, Mars Volta) brings an edge to the band's sound that should help it to fit right in...without blending into the modern rock landscape of 2018-2019.  Each track here is crisp and tight, without tons of extraneous intro or outro monotony to wade through, with every slap to the face track clocking in at between 2:45 and 3:47.  Of course, if you do the quick math, you also understand that this album...again, I'm calling it a maxi-EP...hits the stopwatch button before half an hour has passed, which is a bit of a bummer, as I was just starting to feel like I was good and warmed up by the time "Done My Best" wraps things up.

Overall, a really fine effort from the band and one that I hope gives them more than a passing glance from the modern rock community, even if it's just so Speed can buy a jacket with two sleeves (watch the video, you'll get what I mean...).

Rating:  A crankable way to start the new year for these guys!  Give this seven track effort a seven on your dial!

Back To Reviews Index
Posted by arttieTHE1manparty at 6:05 PM