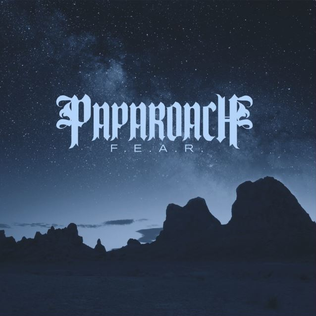 I have know of the band, seemingly forever (they have been around something like 16 years now, believe it or not), but I have never really followed Papa Roach or their career.  In fact, F.E.A.R. is only the second album by the band I have ever owned, with both of them having been referred to me for review.  Sure, I know the singles of the band's nu-metal past, particularly "Last Resort", and some of their more recent efforts like "Getting Away With Murder", but to say I am a fan would be dishonest.  I don't hate them, I don't love them...I nothing them, to be honest.  Papa Roach is a band that has always just "been there" in my musical world.

Nothing really changes with the band's newest album, F.E.A.R.  Are there good songs here?  Sure.  I actually will say that I really like the majority the material here.  For starters, I think the title track, "Face Everything And Rise" is a song that I like a lot despite the fact that I tend to dislike just about everything associated with the current electronica-mashed-with-metal movement.  Don't think along the lines of that ridiculous dub-step approach that Korn used on their last album, but think more along the likes of the orchestral-synth approach used to largely solid effect by bands like Skillet on their past few records.  The song is catchy and anthemic in its approach, and Shaddix holds his own vocally here, never straying outside of the angst-ridden shout-singing that worked so well on the better portions of the band's catalog.  "Skeletons" is another solid track which features a pretty cool bass line provided by Esperance, and a nice drum cadence from Palermo.  More mid-tempo in approach, "Skeletons" will be all over Octane and modern hard rock stations before the summer is over, regardless of if it is released as a single, as it is easily one of the catchiest songs on the disc.  "Broken As Me" picks the pace up just a bit with a track that reminds me a lot of the material on Getting Away With Murder, with emotion-drenched, angry vocals that are alternately screamed, shouted, and snarled for the majority of the track.  The programming on this track is definitely of the trendy variety, with some effects even being added to Shaddix's vocals in a couple of spots, which I wish wouldn't have been done, but they aren't deal breakers here.  "Falling Apart" is another track that I am sure will fill the airwaves, both satellite and terrestrial, as the vocals take on more of a singing quality here, especially on the chorus.  "War Over Me" is the other real stand-out for me, which actually amazes me to a degree because I did NOT like this song at all the first time I heard it, owing largely to the synth-piano intro that just about tricked me into hitting the skip button.  Glad I stuck around because I really like the way the song builds to the chorus which then explodes from the verses.  I also think Palermo provides some excellent skin work here, solidly keeping the tempo and rhythm of the track while still providing unique and interesting patterns for the listener.

From what I have gathered, there are two versions of this album out there, with mine being the "Bonus Tracks" version (hence the bonus tracks...hehe...)  For what it's worth, I'm pretty glad I have this version, as the two bonus cuts here are among the best in my opinion.  "Hope For The Hopeless" is an angry-sounding, but actually rather lyrically-uplifting song about not giving up on oneself, and "Fear Hate Love" is one of the hardest-charging songs on the album with an interesting approach used on the chorus as "fear", "hate", and "love" are gang-shouted while the rest of the chorus is snarled out by Shaddix.  The guitar work here is some of the best on the record, and while not overly complicated, it definitely packs a punch on this track.

What I don't like about this album is that Papa Roach finds it necessary to dip their toes back into the whole rap-metal style and sound that I had hoped was dead and buried 10 or so years ago.  This is especially true on songs like "Gravity", which sounds to me like Papa Roach trying to imitate Linkin Park for some reason, especially in the way Shaddix approaches the vocals.  Does the world really need two Linkin Parks?)  Even the inclusion of In This Moment vocalist Maria Brink can't save this song which I just have no use for.  On another song, "Warriors", Shaddix turns the rap over to Royce Da 5'9" (whoever that is!) to handle a single verse for no apparent reason, and it really does nothing for me.

Additionally, as I somewhat alluded to earlier, the guitars are missing something for me.  No, I'm not talking about solos or anything like that.  Rather, they just seem lifeless and overly-simplified on so many of these songs, not really providing the aggression that I think many of these tracks could have benefitted from.  Too many times the programming takes over for the guitars, altering where I was hoping the songs would go and making them sound generic.  This is especially true in the middle of the record, where things get musically samey (and the rap vocals just lose me).

On the flip-side, I think Palermo delivers some solid to very-good drum work throughout much of this disc, adding some interesting rhythms and beats that give life to songs that otherwise may flatline.  On a song like "Never Have To Say Goodbye", the drums are about the only thing I find even remotely memorable about the track which just drags and lyrically reminds me of a whiny 15 year old girl's diary.  Bleh...  Likewise, Esperance makes up with his bass what he appears to be lacking on guitar, with some excellent work on songs like the previously mentioned "Skeletons" and another of the better tracks here in "Devil".

But, if you are banking the success of your album on stand-out performances by your drummer and bass player, you might have an album that is in a bit of trouble, and that is the situation here with F.E.A.R.  The first four songs, the last two, and two in the middle ("War Over Me" and "Devil") would have made for a pretty solid 8 track album, even if it would've been a bit short by today's standards.  And you know what, if the rap had been left on the shelf, and a couple of the tired-sounding filler tracks here had been left in the studio, I think I would be more inclined to purchase this disc.  As it stands, I'm not going to throw the record away or anything, but I'm glad it was sent to me for review purposes, as I would've been a bit upset with myself for shelling out $15 on this hit-or-miss effort.

The packaging is solid, with full lyrics included in an 8-page booklet that also features writing credits, thank you's, etc.  There are absolutely no pictures of the band included, but there are several desert-apocalypse pictures here which are...interesting.  The production is solid and the mix is really good as no one instrument drowns out another or takes over a track entirely.

Rating:  Rock this to an uneven 5.5, although there are a couple of definite modern rock radio hits here that will drive sales and album interest, for sure.

Back To Reviews Index
Posted by arttieTHE1manparty at 3:32 PM